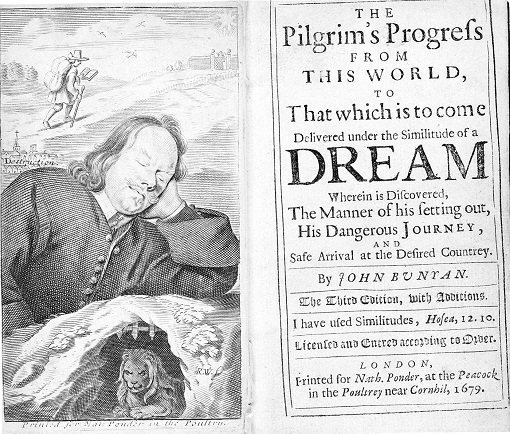 As America shuts down, Rita dreams a dream…

I travelled to the nation’s capital recently and found it a much changed city.  Streets usually thronged with government workers were deserted, museums shuttered, great monuments to the founders and the fallen barricaded with closed signs.  Portents of the end times abounded – on the National Mall a man set himself on fire.  As I walked through this wilderness I came upon an entry to the Metro and hastening underground I boarded a train.  Settled into my seat I fell asleep “and as I slept I dreamed a dream:”

I dreamed I saw a man struggling to walk uphill on a rocky path.  He carried a heavy burden loaded with Wants and Needs, Hopes and Fears, Debts and Worries for his Children’s Future.  Suddenly there appeared before him a personage of imposing mien garbed in the raiment of an 18th century gentleman.  This apparition greeted the man as Citizen and introduced himself as Founder.  Founder handed Citizen a Scroll bound with red, white, and blue ribbon.  If Citizen followed the directions set forth in this Constitution, said Founder, his burden would be lifted and he would dwell in The Shining City on a Hill.  Citizen took the Constitution and placed it securely in his pocket vowing to follow the advice of Founder, leave his Humble Hovel with all its Cares and Woes and seek out The Shining City where he could dwell evermore in Peace and Freedom.

As he set out upon the road with new hope in his heart, Citizen met other travellers in search of The Shining City who fell in as his companions.  They were named Know-It-All, Gullible, and Ignorant, each thinking he knew best what path to follow.  But Citizen ignored them as best he could and kept his hand firmly on the Constitution in his pocket.  Their way was beset with many travails and perils.  The travellers descended into the Valley of the Shadow of Civil War where they encountered a fearsome Giant named The Curse of Slavery who would not let them pass.  Citizen stepped forward and engaged the Giant in combat, striking a mortal blow to its heart.  He clambered over the corpse and picked his way through the bloody battlefields of the Fallen.  Beyond the Valley the travellers entered the Slough of Despond, where quicksands of Depression, Want, and Hunger sucked the unwary to their doom.  His companions disappeared into the mire but Citizen struggled valiantly to reach firm ground.  Barely escaping with his life, he climbed the Hill of Difficulty atop which stood the House of Social Security, an inn offering rest and nourishment to the weary traveller.  But the House was guarded by two fierce lions named Capitalist and Demagogue who had broken free from their restraints.  As Citizen was about to turn away a Remarkable President appeared who held the ravening beasts at bay and bade Citizen enter.  Within the House he gathered strength for the hardships still before him.

When Citizen set out again on his journey he found himself at a fork in the road.  One path led to the Left, one to the Right.  At the entry to each stood a Deceiving Guide, smiling and urging the traveller forward with assurances that his was the better path.  As Citizen hesitated, uncertain which Guide to follow, he spied another path, a Middle Way, which to his eye seemed broader and safer.  There was no Guide inviting him onto the Middle Way but, gripping the Constitution in his pocket for courage, he stepped towards the entrance.  Suddenly he felt hands grabbing him from behind.  They blindfolded him and pushed him roughly forward.  Stumbling to gain his footing he found himself alone and, pulling off the blindfold, saw a steep path falling away before him.  He knew not which fork he had taken, but there was no way back.

Citizen was now sore afraid, but Hope and Determination joined him on the path and together they journeyed on.  At the base of the cliff the travellers reached the vast Plain of Confusion swirling with mists and noxious fumes.  The path across was unmarked but they set out towards the Delectable Mountains of Exceptionalism, dimly visible on the horizon.  As they crossed the Plain a flock of Bloggers and Twitterers swooped down with harsh cries of Rumor and Conspiracy to distract the travellers from their purpose.  Citizen resisted their calls, but the way was long and tedious so when they came upon Vanity Fair he decided to stop a while for some entertainment and refreshment.  The Fair was a cacophony of noise and lurid spectacle.  Here the 1% cavorted with abandon, feasting on haute cuisine prepared from locally sourced organic ingredients by celebrity chefs.  Meanwhile the laborers, who toiled to sustain the Fair’s luxury facilities and amusements, were issued reconstituted food-like substances and reprimanded for their ill health and poor taste.  Citizen remembered the promise of the Founder about life in The Shining City and determined to dally no more but hasten on his way.  He looked around for his companions but they had entered the Unreality Show tent and forgotten all about their destination.

Low in spirits, Citizen journeyed on alone.  Passing through the treacherous Slough of Sequester he lost his way and tumbled over the Fiscal Cliff.  He struggled to his feet and checked his pocket, afeard that the Constitution may have slipped out as he fell.  But to his relief it was still safe therein.  After more weary hours of trudging on potholed roads and across dilapidated bridges, he at last arrived at the base of the Delectable Mountains of Exceptionalism.  He found he could scale them with surprising ease.  At the summit he encountered Pride and Delusion who encouraged him to take in the view and look down upon The Rest of the World.  Delusion assured him that his destination lay not far off and was just as the Founder had described.  Citizen’s heart swelled with joy and he eagerly set forth towards The Shining City on a Hill.

But when he reached the place, instead of a Golden Gate with Welcoming Representatives he faced an impenetrable Great Wall of Lobbyists topped by the Barbed Wire of Gridlock.  Citizen could see no way to gain entry.  Looking about him in consternation he spied a low hill from whence he might be able to see over the Wall.  Scrambling to the top he turned about and saw that there was no Shining City to be seen within the fortifications.  There was nothing but a Fetid Swamp surrounding the House of Congress like a moat.  Citizens like him, those who had by some means succeeded in getting past the Wall, struggled to escape the mire, which sucked at their bootstraps with ferocious force.  One by one they sank from sight with despairing cries and groans.  Oblivious to their suffering, the Preening Pols of the House of Congress disported themselves on the turf beyond the swamp.  They feasted at the overflowing Troughs of Taxation where treasure that belonged to the Citizens for the public good was squandered.  What they did not consume themselves the Pols flung profligately at the Hangers On, the Flatterers, the Hypocrites, and like creatures who roamed the Hallways of the House with impunity.  Seeing this dread vision before him Citizen fell to his knees, held his head in his hands, and wept bitter tears that all his travails had been for naught.   The promise of the Founder, engraved on the Scroll in his pocket, was yet an empty dream.

The brakes of the Metro train squealing over the tracks like the anguished cry of an animal in distress interrupted my slumber.  “So I awoke, and behold it was a Dream.”  I saw that we had reached The End of the Line.  I was fully awake but apparently still thinking in portentous Capitalized Phrases.   In the way that dreams linger in the mind but wisp away the more you try to snare them, I couldn’t be sure what exactly I had seen in the moments before waking.  As Citizen wept, was that the Angel of Compromise I saw hovering over the Capital?  Was she pouring the balm of her compassion over the ugly scene below to ease Citizen’s pain and sorrow?  History will have to write the end of my dream.