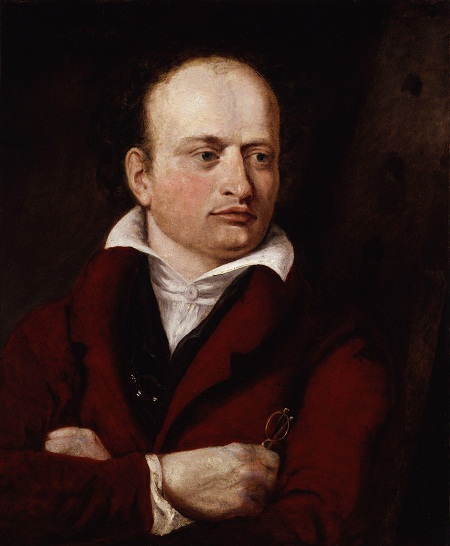 He was a friend of Keats and almost as fine a prose stylist – what a pity then, that Benjamin Robert Haydon wanted to be a painter…

Keats, Bewick & I dined together, Keats brought some friend of his, a noodle. After dinner, to his horror, when he expected we should all be discussing Milton & Raphael &c, we burst into the most boisterous merriment. We had all been working most dreadfully hard the whole week. I proposed to strike up a concert. Keats was the bassoon, Bewick the flageolet, & I was the organ & so on. We went on imitating the sounds of these instruments till we were ready to burst with laughing, while the Wise acre sat by without saying a word, blushing & sipping his wine as if we meant to insult him.

This delightful cameo is from the entry for May 11, 1818, in the dairies of the painter Benjamin Robert Haydon, (available in an edition by John Joliffe under the semi-ironic title Neglected Genius.) Bewick, by the way, is not the famous wood engraver but a pupil of Haydon’s. The identity of the high-minded ‘noodle’ is not known, and he seems unlikely company for Keats, who was never high-minded in that censorious sense. High-spirited, yes, but wherever his art and thought led him, he and his work always remained firmly rooted in the realm of the senses. Keats did not, like some self-conscious mediocrities, place Art on an exalted level above and beyond the vulgar charms of This World. One of the chief joys of reading his letters is the infectious delight he takes in all the pleasures of life, from the highest to the lowest. Indeed you might say that his genius consisted in an infinite capacity for taking pleasure – even in imitating a bassoon.

Lovers of Keats will know Haydon as the host of the ‘Immortal Evening’, when Keats, Wordsworth and Lamb dined with him (‘Great spirits now on Earth are sojourning…’), and the addressee of several of Keats’s poems and a good many letters, which, alas, show an increasing exasperation with Haydon’s endless extortionate demands for ‘loans’. Haydon fancied himself as a history painter of heroic genius, the artist who would restore and elevate the pride of his nation and its art, and who was therefore owed a living by a grateful nation. Unfortunately, not only was he working in a deeply unfashionable (and very unEnglish) genre, he had all but ruined his eyes in his obsessive application to his Art, and, more importantly, he was really not very good at all, his draughtsmanship, colouring and composition all being notably clumsy. 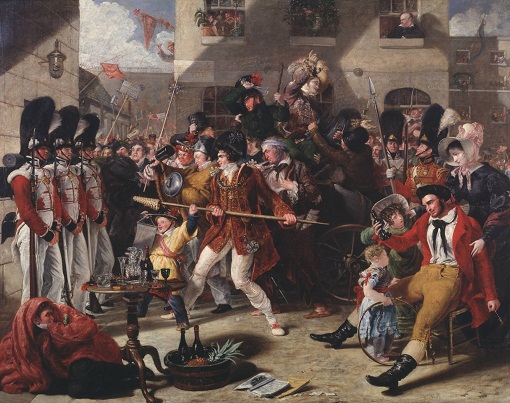 The irony is that Haydon was a far better writer than he ever was a painter, as is evident throughout his Diaires and, I believe, his highly praised Autobiography. As Dickens put it after Haydon’s death (by suicide, after having chewed off every hand that fed him, failed in his high ambitions and accrued massive debts): ‘All his life he had utterly mistaken his vocation. No amount of sympathy with him and sorrow for him in his manly pursuit of a wrong idea for so many years — until, by dint of his perseverance and courage, it almost began to seem a right one — ought to prevent one from saying that he most unquestionably was a very bad painter, and that his pictures could not be expected to sell or to succeed.’

But as a writer, at least about his own life, he is really rather wonderful:

Milton has perhaps a more elevated gloomy sublimity that belongs to hell and chaos – but no man equals Homer and Shakespeare in that inspired spirit, that raciness of nature, which animates and distinguishes every thing they mention. Every thing in Homer is enlivening and vigorous – you fancy all glittering in the heat of the day, gilded by the setting or silvered by the rising Sun; but all Milton’s mighty cherubin or seraphin seemed to draw their flaming swords, or clash their sounding shields, as if they shone through a darkened glass – dingy, red, solemn, terrible.

That’s Haydon a few years before he met Keats – no wonder the two men took each other for kindred spirits when they did meet, and Keats was so exalted by the encounter that he was moved to verse.

It could have been a fine and enduring friendship, had it not been for Haydon’s behaviour in pestering his generous young friend for money at every opportunity, despite knowing that Keats was himself hard pressed and embroiled in endless difficulties over his inheritance.

Haydon was, despite the pious ejaculations that punctuate his writings, quite blind to his own faults (those ejaculations generally boil down to thanking God for allowing him to make progress on whatever Great Work he was creating – compare and contrast the prayers of Samuel Johnson). Like many who are blind to their own faults, Haydon was all too alive to those of others – and woe betide those who fell foul of him (as almost everyone did at some time or another). Here he is in full flow on Leigh Hunt (who has made an appearance on The Dabbler):

This is a man who can scarcely talk of a principle he has not violated. Did he not induce his Brother under a sacred promise to put his name to two bills of 250 each, and while I and his Brother were fagging about all day in the dirt, in order to raise the money that John might not go to prison, he never came in till three hours after his promise, because it was likely to rain! In domestic matters to his wife he is a tyrant. His poor wife has led the life of a slave, by his smuggering fondness for her Sister. He likes & is satisfied to corrupt the girl’s mind without seducing her person, to dawdle over her bosom, to lean against her thigh & play with her petticoats, rather than go to the effort of furious gratification. His wife’s Sister, the Aunt of his four little children – is it not cruel to keep his wife on the perpetual rack of waning affection, to praise the Sister for qualities which his wife has not, and which he knew she had not when he married her? This private conduct must be mentioned because in private conduct a man shews his real character, being the situation in which he is uncontrouled. He will do the most dishonourable things. I put my name once to a bill of 45 which I owed him – he scratched out 45 & made it 55, because he wanted more, and then appealed to my friendship after the bill was gone! He affects contempt for ribbons & Stars, yet I have seen his face shake at the mention of Lord Erskine bearing a title. If there is to be a revolution and such men are to get at the head of affairs, God help us…

And there’s more – and Leigh Hunt is not the only target. How sad that a man with such gifts and such a sensibility as Haydon – a man capable of inspiring the friendship and admiration of Keats – should have spent so much of his energy in indignant vituperation and relentless cadging from all who crossed his path.