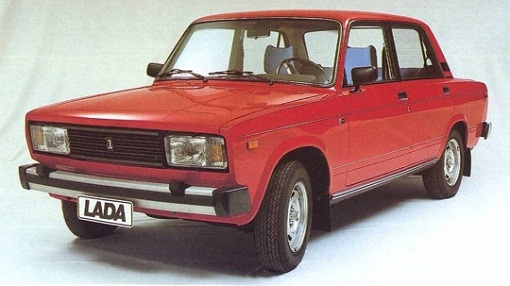 Hello Ivan, got a new motor? Daniel Kalder finds that the notorious Lada is still selling well in some parts of the world…

I first learned about the legendary Soviet Lada car in the mid-‘80s, when the cash-strapped USSR started exporting the notorious rust buckets to capitalist Europe in the hope of scraping together some hard currency. My friend Neil’s mum bought one, and since she worked as a teacher at my school, we all stared at this exotic vehicle in the car park. Cunningly, Neil told us it was a very special vehicle: a bit like a BMW, only better.

A few weeks later and Ladas had already become infamous for their rubbish quality, and were the butt of a thousand corny jokes from Saturday teatime TV comedians. But Neil escaped ridicule by being prepared well in advance with a gigantic lie. Clever boy; I wonder what he’s doing now…

In fact, during this period lots of countries from the Eastern bloc were exporting bad cars to the UK. The Yugoslavian Yugo and Czechoslovakian Skoda had reputations similar to that of the Lada, whereas the Polish Polonez had such a low profile that you could buy it and not suffer instant ridicule. It was just as bad as the others, though: I knew a guy who bought one and it broke down all the time. The East German Trabant was a byword for the depths of Eastern European automobile awfulness; lots of lazy TV producers and travel writers still wheel them out for cheap laffs even to this day. I don’t think they were ever exported abroad, however – at least, not to Britain.

But with the demise of the Eastern bloc, bad Eastern European cars largely melted away from the popular consciousness. Some Germans bought Skoda and the Czech car became un-rubbish. Yugoslavia disintegrated, and that was it for the Yugo. The Polonez and Trabant went to the great scrap heap in the sky. As for the Lada…

Well, in Russia, they kept making them. In the mid ’90s, I lived on Leningradskoye Schosse in Moscow and remember watching in fascination as hundreds if not thousands of Ladas hurtled past my window. It was like the Berlin Wall had never fallen, as if Paul McCartney’s execrable “Spys Like Us” was still in the charts. Later I discovered that the model that had been exported to the UK was a Zhiguli, and it was far from the worst kind of Lada you could drive. People were still rattling about in 30-year-old Kopeikas, for instance. Then there were other Soviet brands such as the “luxurious” Volga sedan and the Moskvich. I confess I have enjoyed every ride I’ve ever had in a Volga; the same cannot be said for my experiences of the Moskvich.

My Russian friends were under no illusions regarding the quality or reliability of Ladas, but they generally maintained a cheerful, even affectionate attitude toward the national rust bucket. “It’s the kind of car you can fix yourself,” I was told. “… and it’s good in cold weather.” Maybe.

On the other hand, the Lada Niva – a kind of jeep – does strike me as a tolerably decent vehicle. I once rode halfway up a mountain in Central Asia in a Niva and it did not break down, sparing me a potential destiny as dinner for vultures. For that, I am forever grateful.

When I left Russia in the mid 2000s, there were a lot more foreign cars on the road, and the last time I visited it seemed as though there were hundreds of Mazda 6s, although maybe I just noticed them because that’s what I was driving in Texas. As living standards rose, more and more Muscovites seemed to be ditching domestic automobiles for decent German or Japanese cars. Thus I was interested to read two stories on RIA Novosti recently that confirmed for me that not only do Ladas still exist, but there are even new models – the Lada Karina and Lada Priora – that are popular in Venezuela.

Much as the Zhiguli was a Fiat knock-off, the Lada Kalina and Lada Priora both look a bit like sad Ford Escorts. Still, a mediocre car is better than no car, and I am glad that the people of Venezuela will soon be able to drive something. Still, the fact that the Venezuelans are hot for cheap Russian cars and not, say, a Volkswagen, says all you need to know about Chavez’ socialist economic “miracle.”