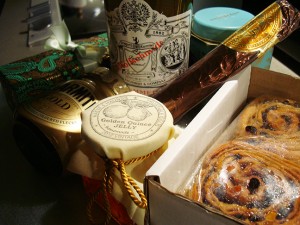 Thank god, the Christmas food (and drink) fest is almost over. Though if your Christmas is like mine, you may end up with quite a few culinary curiosities in your food cupboards.

I buy numerous jars of pickles every year. Last year’s pickled walnuts were still in the cupboard when I put this year’s bottle on the shelf.  Someone opened last year’s bottle – I only know because when I pressed down on the top it popped up and down. This year’s jar remains, as yet, unopened.

Last year our neighbours brought us a gift of some jaw-clampingly glutinous buns from Fitzbillies, which they openly admitted were an unwanted gift. This year we received the same sticky buns as a gift… from the same neighbours.

One of our guests has a liking for a rare liqueur called Kummel. He claims it was originally produced in Denmark for the Russian Tsars. The bottle is labelled 39% proof  – and evidence proves that anyone who drinks over half of one is likely to spend a fair part of the day in a somnambulistic stupor.  Yet this drink is much sought by after by said guest as a precious Christmas tipple. So we always buy it, just for him.

Whilst toiling away in the kitchen, I managed to catch a glimpse of Heston Blumenthal’s giant Christmas igloo/pudding on television.  How absurd.  But we didn’t complain when we tucked into one of his ‘hidden orange’ Christmas puddings at home. How soon can we put our names on the list for one next year?

So, which Christmas foods do you like  – or loathe? And which will forever remain curiosities at the back of the cupboard in your household?