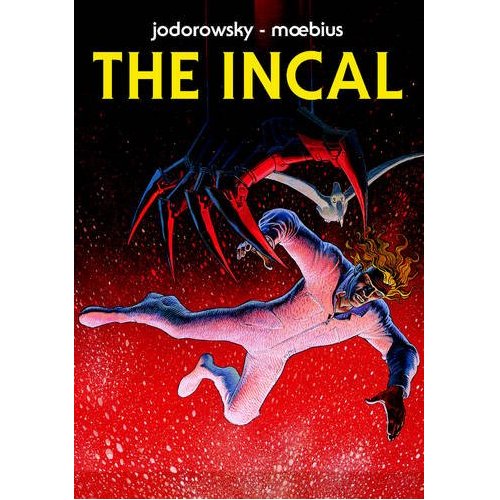 Apparently this: ‘every five thousand years the most capable member of a carefully selected alien race must impregnate the Bergs’ beloved protoqueen’ – doesn’t cue up the most bizarre scene in the book. Daniel Kalder reviews an unmissable bande dessinée…

There comes a point in every individual’s lifetime when he or she must face the inevitable question: should I read a 307 page mystical- psychedelic Chilean-French science fiction tarot epic that was originally published in the same format as a Tintin book?

The answer is to be found between pages 188-201 of Alejandro Jodorowsky and Jean “Moebius” Giraud’s The Incal. During this sequence the protagonist John DiFool participates in the sacred five thousand year games of the Bergs, a race of beaked aliens awaiting regeneration:

“The Berg religion makes it clear… every five thousand years the most capable member of a carefully selected alien race must impregnate their beloved protoqueen. After 24,000 such impregnations, the legend states that the Bergs will enter the Golden Age of eternal prosperity.”

For this set of games, the Berg have selected galaxy Xiam 45, which is populated by humans. John DiFool, being a selfish, class “B” detective fond of homeo-whores and drugs is an unlikely candidate, but such is the will of the Incal, a cosmic darkness/light principle which also doubles as an advice-dispensing microscopic space ship currently located inside his bloodstream. After hours of fighting against thousands of competitors, DiFool finally penetrates the sacred cone, where he is confronted by the sight of the protoqueen herself- a pool of gloop, in which floats an eye and a mouth: “Drown yourself in me, my love!” she cries. DiFool obliges, great ecstasy ensues, only for the protoqueen to demand her lover’s disintegration…

But back to the question above, and its (by now obvious) answer:

The scene with the protoqueen is not the climax, nor is it necessarily the most bizarre thing in the book, and the excellent punch line to DiFool’s moment of interspecies passion doesn’t come for another 100 pages or so. It is but one brief sequence in an unrelenting and at times exhausting onslaught of strange, funny, violent and dramatic events that flow from the imaginations of Jodorowsky and Moebius as they propel DiFool ever onward to the heart of space and time. Even God- or somebody very like him- shows up towards the end; and yet for all of the quasi-religious mystical-symbolic overload The Incal adheres to the classical format of a science fiction space opera. Or rather, it makes explicit the links between a mythical quest narrative generated by mankind’s deepest impulses and the kind of amusing nonsense you might find in Star Wars.

Where did it come from, this Incal?  It was born in the white heat of desperation, following the collapse of one of the most ambitious film projects of the 1970s- Jodorowsky’s Dune. Jodorowsky, who had attained great notoriety thanks to his mystical western El Topo and monumental work of counter culture gibberish The Holy Mountain, had assembled an international team of artists to work on an adaptation of Frank Herbert’s novel. Everybody who was anybody was going to be in the movie- Salvador Dali, Pink Floyd etc…. and then, when funding fell through his team went on to work on other influential movies. Designers Moebius and HR Giger and special effects master/screenwriter Dan O’Bannon would all make major contributions to Alien, while The Long Tomorrow- Moebius’ cartoon strip collaboration with Dan O’Bannon- would inform the look and feel of Blade Runner at least as much as the Philip K. Dick novel on which it was based.

As for Jodorowsky, he and Moebius (who was, until his recent death, regarded as the finest comic book artist in Europe) decided to continue their collaboration as a cartoon strip which was first published in France in six volumes between 1981 and 1988.

It is said that Jodorowsky poured thousands of his ideas from the aborted Dune adaptation into The Incal but as he did so they mutated into something entirely new, which was perhaps not surprising as 1) Jodorowsky had not read Dune when he optioned it 2) he has a monumentally fertile imagination and 3) he collaborated with Moebius in a unique way. In the story notes of the 1980s edition of The Incal– sadly not included in the most recent iteration- Jodorowsky explained that when he and Moebius were about to produce a new installment, they would meet and plunge into each other’s subconscious minds. Jodorowsky would then act out scenes from the story (he had studied under Marcel Marceau and written the “scripts” for some of the master mime’s most famous performances), while Moebius sketched away furiously.

Jodorowsky’s obsessions fill the book- the tarot, SF trash, symbolism, sex, world religion, the quest for healing- while Moebius, who had a few obsessions of his own, transformed this potential chaos into something beautiful. And so the two co-creators roamed across stars, planets, galaxies, introducing new and demented ideas in almost every panel.

Do they occasionally break the rules of narrative? Certainly. Sometimes it seems that Jodorowsky has set himself the challenge of inventing a series of deus ex machinas, each one more absurd than the last one, but then the Incal itself is a deus which has decided to enter the machina. The book also takes a turn towards New Age waffle towards the end, but having begun rooted in the filth of the depraved future dystopia of the City Shaft and only gone transcendental; following encounters with techno popes, the Great Darkness, cosmic space squids, the presidential clone and his hunchbacks, the Metabaron, the perfect androgyne, the Imperoratrix and the Necrodroid (among hundreds of other unlikely creations) I can live with the encounter with OHR the Eternal Light. Who knows? Perhaps one day, I’ll even enjoy it.

By the time he came to draw the final two installments Moebius had moved to the USA, and he shifted from the orderly panel breakdowns of European comics to the sprawling and chaotic layouts which (he noted) American artists often used to disguise their technical weaknesses. Likewise the world the two men had created would soon spill beyond the confines of one series, and Jodorowsky has since created many sequels and prequels in collaboration with different artists. But The Incal is the source- a rare instance in which two extremely creative men threw everything they had at a story which may contain deep truths or may be demented gibberish, or possibly both at the same time. Trash exists in a symbiotic relationship with the divine, just as the Dark Incal does with the Light. And if, as we pass through the Doorway of Transfiguration, the idea overload occasionally causes the story to veer out of control and crash into a ditch, then not to worry- another startling concept will be along in a panel or two to start the adventure all over again.

You can buy The Incal here and it’s published by the worthy people at Self-Made Hero.

6 thoughts on “The Incal”