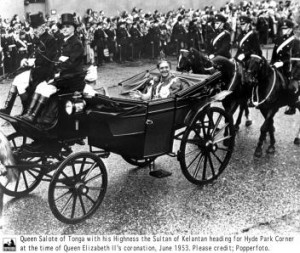 “Will Britain’s watching millions be let down today by the weather?” asked the Daily Sketch on Tuesday 2nd June, 1953. The Coronation forecast was as follows:

WINDS northerly fresh or strong and gusty, some SUNNY intervals. Occasional SHOWERS, heavy at times, perhaps with HAIL and THUNDER here and there.

Those camping out on pavements lining the Queen’s route were urged to “take umbrellas and raincoats with you.”

But the clouds had a silver lining in the form of Queen Salote of Tonga. The “friendly Queen of the friendly Isles,” who rode through London’s rain-swept streets in an open topped carriage (see above). The “dusky, 6ft 3 in tall Queen” in her soaking wet robes rapidly became the second most popular person in the procession. As Tonga’s rainfall is around 70-110 inches per annum against London’s 24, she must have felt quite a home.

When the temperature plummets and the heavens open for the Diamond Jubilee celebrations this weekend, you’d be as wise to take a raincoat and an umbrella as you would have been sixty years ago. But I wonder who will take centre stage, next to Her Majesty, this time round… Will there be a new Rain Queen, or will the event be totally dominated by talk of the predictably disappointing British weather? 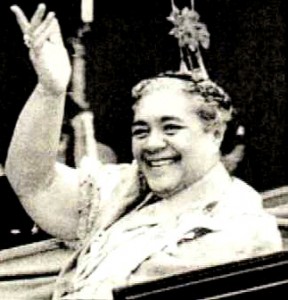