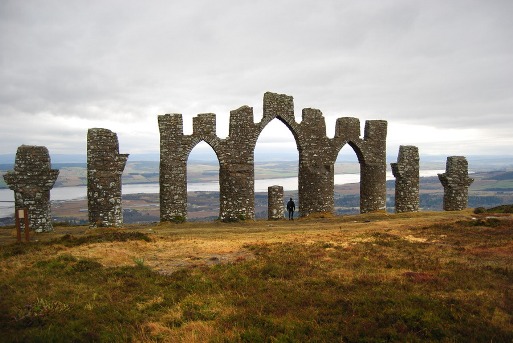 Sir Hector Munro’s folly was built to commemorate his own heroism: a replica of the Gates of Negapatam, an Indian stronghold he had captured from the Dutch on November 12th 1781 after a four week seige. After twenty years of service in the Indian army, he retired in the 1780s to Novar House near Evanton in Cromarty. During the last years of his life he found time to develop Novar into a model estate and shared some of his fortune by paying the unemployed a penny a day to build this splendid eyecatcher on Fyrish Hill, consisting of three battlemented arches, the centre one taller, with ruined pillars standing to either side. Heavy and oppressive — and very Scottish rather than Indian — it is reminiscent of Yorke’s Folly in North Yorkshire in its situation, but much finer.

It is a spectacular eyecatcher; it can be seen for miles around, and indeed is best seen from a distance. The frustrating thing about the forty minute walk to the folly is that the goal is completely invisible until one is four minutes away. Wrap up warm for the climb; we were numbed by the May sleet on the descent. The northern flanking arch, now ruined, is set a little behind the main monument, while the southern flanking arch is pushed a little forward, presumably for better optical effect when viewed from Novar House. Only on closer inspection from the top of the hill did we discover that the indefatigable Munros had constructed two further hilltop eyecatchers — there is no shortage of suitable hills in the area-due south of the Gates.

Incidentally Fyrish is not a Munro — it was another Hector Munro who gave his name to all the Scottish peaks over 3,000 feet high. By the time you read this, the hills to the west will be wind farms.

3 thoughts on “Follies of Britain: The Gates of Negapatam, Evanton”