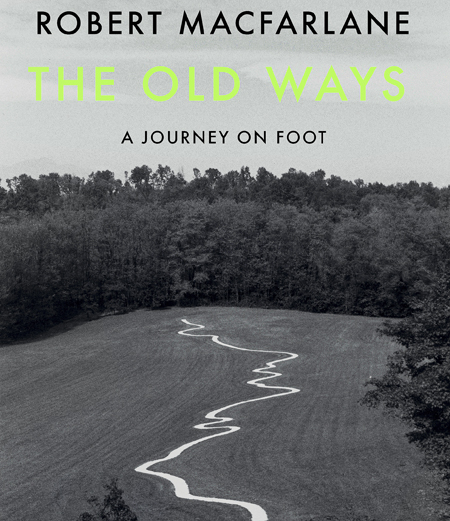 We imagine that this might be one of our more popular book club choices, as this month we’re giving away 12 copies of Robert Macfarlane’s fantastic new book to members of our Dabbler Book Club and our esteemed, yet highly secretive League of Dabblers…if you haven’t yet joined up, now would be a good time to do so…

In The Old Ways, Robert Macfarlane sets off from his Cambridge home to follow the ancient tracks, holloways, drove-roads and sea paths that form part of a vast network of routes criss-crossing the landscape. The result is an immersive, enthralling exploration of the ghosts and voices that haunt old paths, of the stories our tracks keep and tell, of pilgrimage and ritual, and of songlines and their singers. Above all this is a book about people and place: about walking as a reconnoitre inwards, and the subtle ways in which we are shaped by the territories through which we move.

Told in Macfarlane’s distinctive and celebrated voice, the book folds together natural history, cartography, geology, archaeology and literature. His tracks take him from the chalk downs of England to the bird-islands of the Scottish northwest, and from the disputed territories of Palestine to the sacred landscapes of Spain and the Himalayas. Along the way he walks stride for stride with a 5000-year-old man near Liverpool, follows the ‘deadliest path in Britain’, sails an open boat out into the Atlantic at night, and crosses paths with walkers of many kinds – wanderers, wayfarers, pilgrims, guides, shamans, poets, trespassers and devouts.

He discovers that paths offer not just means of traversing space, but also of feeling, knowing and thinking. The old ways lead us unexpectedly to the new, and the voyage out is always a voyage inwards.

‘Sublime writing . . . sets the imagination tingling . . . Macfarlane’s way of writing [is] free, exploratory, rambling and haphazard but resourceful, individual, following his own whims, and laying an irresistible trail for readers to follow’ Sunday Times

After that, you don’t have to do anything. All members will be automatically entered into the ballot for one of 10 free review copies, which will take place on Thursday 12th July. We’ll email the winners, at which point you can opt out if you really don’t want that month’s choice and would rather another member got the chance.

We’ll be reviewing The Old Ways in the next month or two, and you can contribute your thoughts (though you’re not obliged to.)

Thank you to our friends at Penguin for kindly providing the copies.

Ts &Cs: All entrants will automatically be entered into the Dabbler Book Club. This means that you will receive occasional emails from us about the next monthly book and other offers. However, we will not pass your details on to any third party and you can unsubscribe at any time by emailing editorial@thedabbler.co.uk and requesting to be unsubscribed. Winners will be drawn at random from the Dabbler Book Club members at 12pm on Thursday12th July 2012. The judges’ decision is final. The Dabbler reserves the right to offer an alternative prize or to offer no prize and withdraw the competition at any time for any reason. More competitions are available at Free UK Competitions.