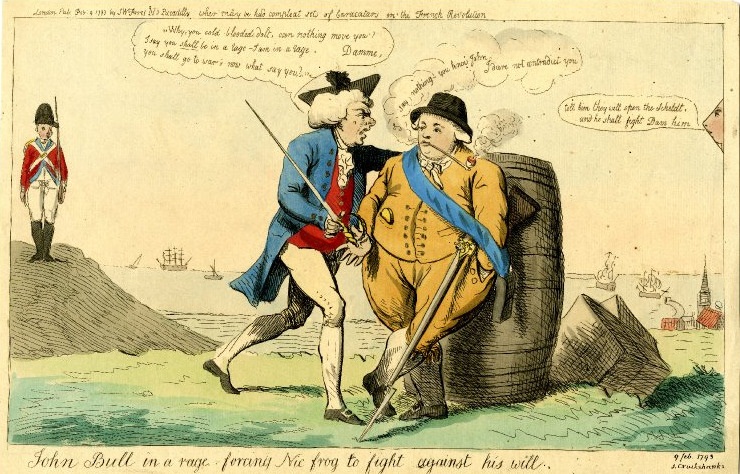 Jonathon Green continues his series looking at how English slang has treated those funny foreigners. This week, ‘frogs’ – but it’s not the French…

Let us consider the frog. Not as an amphibian but in terms of nationality. This is not, however, the traditional frog, whose consumption by the eponymously nicknamed nation led a newsreel commentator, mocking c. 1942 some French governmental collaborator, to observe that the appetites of the gentleman in question made him effectively ‘a cannibal.’ This is another frog, that frog whose existence in the southern parts of Lincolnshire, known as ‘Holland’ from its flatness and the farms devoted to tulip-growing, has prevailed upon locals to term themselves ‘yellow-bellies’. The same frog that, a few hundred miles across the North Sea, brings us to the Dutch.

The original slang word for the Dutch – that’s Dutch as in one-time national enemy, of course – was frog. It began as 14th century standard English and meant any unpleasant person; moved on to the Jesuits, thence to the Dutch and after them to their replacement as the national bugaboo: the French. It was popularized in John Arbuthnot’s The History of John Bull (1712), in which he coined that name for a Briton; his Dutchman was Nic Frog while the native of France was Louis Baboon, referencing the popular royal forename, of which there had by then been fourteen. Frogland has meant France but a frog-lander was a Dutchman who in turn, and just to be difficult, was in slang a German, a Scandinavian or at a pinch any variety of foreigner. A Dutchman’s drink would empty a shared vessel, a Dutchman’s headache was drunkenness and the phrase I’m or I’ll be a Dutchman expressed impossibility; the refutation, launched by Shakespeare with ‘an Ebrew Jew’ n has also used a bishop, a Chinaman or Chink, a nun, a tailor, a tinker, a Trojan and a Turk.

Nature’s frog was a Dutch nightingale. The equation of the Dutch and the dairy has given butterbag and butterbox; margarine was briefly bosh which came from artificial butter manufactured c. 1900 at ‘Hertogenbosch’ or ‘Bosch’. Irving Welsh calls them cloggies, another stereotype.

These Dutch, meanwhile are to not be confused with the Dutch once found as a common American nickname, i.e. ‘Dutch’ or ‘Dutchy’. This staple figure of hard-boiled fiction and Warner Brothers movies is not Dutch. He is German. The word is deutsch and the nickname takes one back to the Pennsylvania Dutch, again Germans. Nor for that matter, though she is listed as such in the OED, is this individual a costermonger’s or any other form of wife, as hymned on the ’alls by Albert Chevalier and his epigones. The word is duchess. It is rhyming slang, and full-out is duchess of fife which as noted equals wife. Please concentrate, we are not finished. The original use of Dutch, c. 1480 and in Caxton, referred to the High Dutch who were in fact Germans and who, despite a simple cartographical take on such an image, lived in the south of that country. The Low Dutch, who appear around 1600, come from the north and north-west. The reason being that high means mountains and low…does not. In any case for our purposes, the Low Dutch are not Germans, even of the plain: they are the Dutch.

Dutch is a fecund source of compounds and phrases. Uncle, courage (the usual propagandistic scam to embolden one’s own troops), treat and indeed fuck are well known. Among the less frequented are almanac and fustian: gibberish (and synonyms for the better-known double-Dutch); bath: a very cursory wash; cheese; a bald person; comfort or consolation: a style of comforting in which the speaker (that Dutch uncle no doubt) intones ‘Thank God it is no worse’; concert or medley: any performance in which each musician plays a different tune and thus any bad performance, musical or metaphorical; feast: any meal where the host gets drunk before their friends; foil: an alloy of copper and zinc passed off as gold; milk: beer; oven: the smell of a bed in which someone has just farted; reckoning: a bill that, if disputed, only gets higher; rub: the act of rubbing one’s knuckles hard across one’s victim’s skull; parliament or row: a spurious argument, generating far more sound than any real fury (the French opt for une querelle d’Allemand); pink: blood and widow: a prostitute. In the sexual lexicon Dutch is inter-breast intercourse, a Dutch salute an erection and Dutch wife a bolster and latterly a blow-up sex doll; a Dutch door is a bisexual woman (she ‘swings both ways’). The phrase to beat the Dutch is to do something outstanding while to do a Dutch act or take the Dutch route is either to run away or more usually to commit suicide.

Frog’s wine was gin, which came from genever (which meant juniper and had nothing to do with Geneva even if to have been at Geneva meant to be drunk and a Geneva print a glass of gin) and was known otherwise as Hollands, and in slang as Hollands punch or Hollands tape and as apricock (i.e. apricot) water, diddle (thus the diddle-cove who sold it at the diddle-shop), Dutch drops, snapps (i.e. schnapps) and white tape (red tape was brandy).

The derogatory arsehole of the universe is a 20th century coinage (H.L. Mencken seems to have coined it for Los Angeles) but the image is old and in A Brief Character of the Low Countries (1660) Holland is described as ‘the Buttock of the world, full of veins and blood, but no bones in’t’ in.’ Low Countries itself meant the anus to Shakespeare and thanks to the second word the vagina to everyone else; the punningfulness was terrific. Shakespeare liked Netherlands too, another reference to orifices ‘down there’ (and also offers Holland, with an extra wink at hole); so did the great John Taylor. But why stop there: try this, from Taylor’s Sculler, (1612): ‘Lieutenant Puffe from Cleaueland is return’d, / Where entering of a breach was sorely burn’d: / And from reuenge hee’l neuer be perswaded, / Till the low Countries he hath quite inuaded, / When his hot wrath makes Neatherlands to smoke.’ Eleven possible puns, if I count correctly.