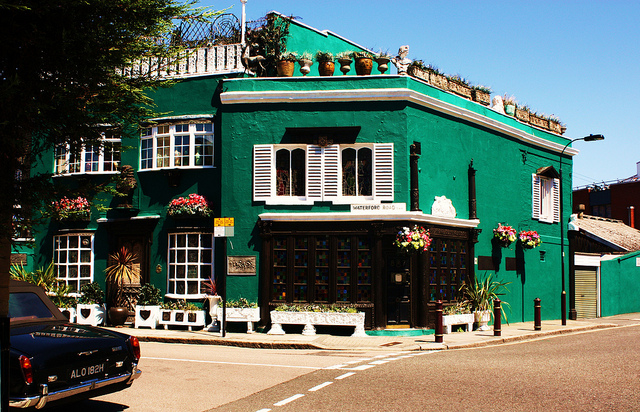 Today we’re pleased to welcome Luke Honey to the Dabbler. You can find Luke writing about food, drink and the finer things in life over at his blog The Greasy Spoon. We start by revisiting a west london institution redolent of the swinging sixties…

Hands up who remembers The Gasworks?  Twenty odd years ago, I started my glamorous career in the so-called Art World – as a porter at a well-known auctioneers to be found in the grotty fag-end of The King’s Road, London; humping antique brown furniture from lorry to saleroom, and stacking shabby Victorian paintings against the brick walls of the warehouse. A favourite after-work refuge was The Gasworks restaurant (a last gasp of the myth that was Swinging London), in that no man’s land between Chelsea and Fulham- a former haunt of Princess Margaret, the Rolling Stones and, if the internet is to be believed, Noel Gallagher.

Where on earth do I begin?  This was a London institution, where eccentricity became a creed. Outside, it looked a bit like a private house, with its green painted stucco, latticed windows of stained glass, garish window boxes, and niches filled with ponderous busts and Neo-Classical statues. The proprietors were- how can I put this politely?- different. Shells (Cheryl?) of Wagnerian proportion, fag in mouth and forthright opinion, ruled over her kitchen, offering a choice of rack of lamb (some lover-ly lamb, dearie?) or duck ‘all orange’.  Jacks (her husband) was a thin, dapper man with a trimmed grey beard and silk stockings. Rumour had it that he had previously held some sort of vague career in the antiques business. He liked to join you for an after dinner cigar- this had more than a whiff of Reggie and Ronnie about it.

The dining room was reminiscent of an Edward Gorey illustration or a Pinewood set from that early 70’s meisterwerk, “The Legend of Hell House”.  Here was the perfect place to lie on a chaise longue, sip a gin and tonic and admire the Victorian bric-a brac: pornographic chess sets, oil paintings of dubious antiquity and provenance, heavy gilt frames, doubtful portraits in the manner of Greuze, and wall-mounted taxidermy; all set off by a long, polished mahogany dining table, high-back ‘Jacobethan’ chairs and a massive chandelier.

Choice was not a word in The Gasworks’ vocabulary: champignons en croute (a nice bit of tinned mushroom poised daintily on a slice of toasted Sunblest) or avocado pear; rack (‘racked’ being the operative word) of lamb or assassinated duck; some sort of gateaux horror topped with UHT cream from a spray-on aerosol. Indeed, The Gasworks seemed to be almost obsessed with the trend setting avocado: their seemingly endless supply was stacked up high in the corridor which led to the bogs, which, in turn were lined to the ceiling with amusing nineteenth century erotica.

I held my 30th birthday party there  (I was less interested in food, then), and as that night finished in the wee wee hours (Jack locked the front door at midnight) and the alcohol flowed, my memory is decidedly hazy. Pearl, the long-suffering waiter, rather sweetly made me a little chocolate cake with the word ‘Love’ piped on the top in very shaky handwriting.

If they approved of you for some reason (as a wannabe auctioneer, I was in ‘the biz’, Guv), everything was just dandy. If they didn’t (and this could change on a daily basis, as when my brother in law had a bit of mutton bone pointed directly at him, and told that he was ‘evil’), you couldn’t even get past the oak studded door. An earnest European couple in immaculate Loden coats, enticed, no doubt, by the cosy Englishness of the bow windowed exterior and the enchanting prospect of avocado vinaigrette, had the door slammed in their faces and were told to ‘get lorst, and don’t even think of comin’ back!’.

But a few months ago I did go back. From the outside, everything looked the same: Jack’s black Rolls-Royce corniche (fitted with darkened glass and vanity numberplates) was still parked opposite, and the house looked immaculate. But most ominously, the menu had been taken down. We threw gravel at the upstairs windows, but the net curtains remained firmly closed, and we didn’t even get a twitch. Sadly, it looks like Jacks and Shells are no longer plying their trade. I do hope they haven’t gone to the great gasworks in the sky, and are enjoying their retirement. That fast changing corner of SW6 won’t be the same without them. Even without the duck.