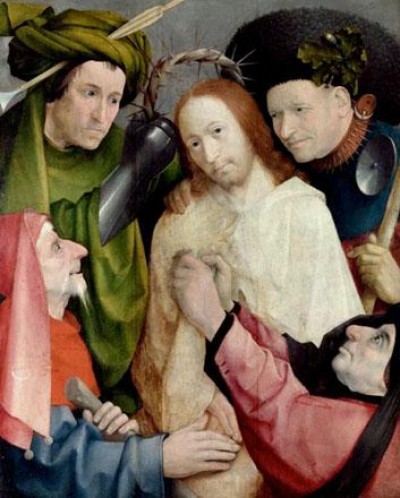 Continuing our occasional series featuring some of the finest pictures in London’s National Gallery, Gaw looks at a crucifixion scene that’s unusually troubling even for this genre…

The current work-in-progress of Mark Alexander, a painter and friend of The Dabbler, is inspired by Christ Mocked (The Crowning by Thorns) by Hieronymus Bosch. He urged me to have a good look at it as he found it had an uncomfortable power. I took his advice and since then I haven’t been able to stop returning to it: it left me feeling uneasy, and puzzled.

Certainly there are some straightforward reasons for this to be an unsettling painting. There’s the portraits of the four mockers, each a disturbing psychological study in variously sadism, pomposity, malice, cynicism, complacency. Together they give an impression of misplaced propriety. They’re what the Viennese call Respektpersonen; men who expect a little deference as their due, communal pillars, even perhaps dignitaries.

Then there’s the gaze of Christ. At first this seems straightforwardly gentle, resigned and compassionate. But there’s something about its fixity, its steadiness as well as the set of the mouth that suggests something more complex: it’s quizzical, perhaps even sardonic.

Combine all of this and one is left squirming. That gaze has put you on the spot. Why are we being quizzed? Is that fleetingly sardonic look actually mocking us?

Despite the ambiguities and subtleties of the psychologies on display here, I, for one, can’t avoid the conclusion that we’re being presented with a challenge, and quite a blunt one: so, what are you going to do about this then, this crime? Nothing? Scared of these men, their authority, are you? But what sort of authority is it that does this? …I think the appropriate phrase is passive aggressive.

But no less aggressive for that. Christ here is clearly the lamb of God, sacrificed for our sins. But Bosch’s skill also has him also portraying another promise:

The painting is divisive, in fact it demands division: us, the viewers, against them, the mockers. And isn’t it quite a welcome division for the rebel-at-heart? Look at them: they’re the officious bureaucrats, place-holders, brown-nosers, expense cheats, paper-shufflers, vindictive bullies, preening hypocrites, slippery connivers that we all know and resent.

All this done through that gaze.

Bosch painted Christ Mocked some time between 1490 and 1500, just before the dawn of a century and a half of religious conflict. I wonder if it contains both prophecy and provocation.

8 thoughts on “Hieronymus Bosch – Christ Mocked (The Crowning of Thorns)”