It is Infernal Week over at the Anatomy of Norbiton (by which I mean, the next page – Infernal – is going up on the site), and in amongst its various smoky descents and gibbering devils, and an account of the 1527 Sack of Rome, there is some business with a fire which took hold of Madingley Tower on the Cambridge Estate in Norbiton in June 2010 and gutted the top five floors or so. No one was hurt, but a number of people were chased from their homes. 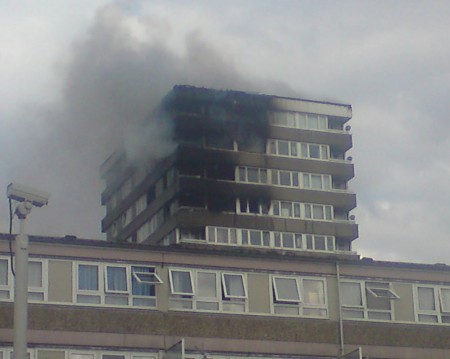 On the Anatomy page, Civ Clarke, a Norbiton character, ends up sleeping on my sofa as a result of the fire, having lost everything. He is very philosophical about it all. He just stretches out and grazes on nuts and grapes and whatever else lies to hand, like a stoical Roman.

While I was busy getting all this down towards the end of last week, I was spooked (and of course appalled) to hear that my friend the artist Anna Keen, who is responsible for the Tapirman cartoons on the Anatomy and Atlas of Norbiton, had lost everything she owned in a fire that gutted her Amsterdam studio (really a corrugated iron hanger which was also her home). Impressively, the fire was large enough to make the North-West Holland local news. 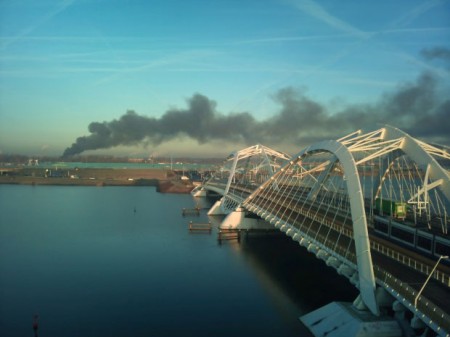 I said to her last year when I paid her a visit that all her studios have a knack of looking the same. Since I have known her she has moved from Rome (where her gallery is located), to Venice, London (at Trinity Buoy Wharf), a field somewhere in Staffordshire, and Amsterdam, jalopying between them in a knackered old Transit Mk.V (recently replaced with a high-roofed Mercedes Sprinter).

Of course it is partly true that her studios looked the same simply because they were in fact full of the same stuff, which she moved from city to city like a portable fragment of Sibelius’s mosaic of creation. She has had the same enormous easel since she was at art school in Paris made, seemingly, of railway sleepers (it must have burnt for hours, and perhaps is still smouldering as you read this); there were a thousand art books, battered and torn from use and transit; a pair of Quad Electrostatics (which she always called the Electrostats) which she got for a song from a bloke in the Quad factory who took a liking to her; and so on – all recognisably Anna’s stuff.

But from another perspective, a room full of stuff, like a city, or a culture, is a proverbial Ship of Theseus. Its parts are interchangeable, replaceable, dispensable. Where there is a human creature of any description, there is a gravitational system into which stuff will be drawn, and where the gravity is strong – as it clearly is in Anna’s case – the stuff will organise itself into familiar patterns, so many concentric rings and shimmering belts.

I remember once, in Japan, having been to see the Gold Pavilion Temple in Kyoto and being mildly surprised at quite how well it had weathered the passage of time since it was first built in the fourteenth century. I was told it hadn’t weathered well at all, and had in fact been burnt to the ground twice in this century. “So it isn’t the original building?” I had asked my Japanese guide.

“But yes, of course it is,” he insisted, rather surprised at my question.

“Of course. It is an important and historic building.”

“But of course. It was burnt down.”

“So how can it be the same building?”

“It is always the same building.”

I had to admit to myself that this was in fact a perfectly rational point of view, it merely started from an unexpected premise. The idea of the building, the intention of it, its design, are all immutable and are the essence of the building. The intention of the original builders is what survives.

The paradox of Theseus’s ship – whether the ship is the same ship once all its parts have been worn out and replaced – is not a paradox at all. It is merely a conflation of different concepts of sameness. Like the Japanese guide, the Renaissance was relaxed about the actual material of antiquity. A newly cast bronze candelabrum or statuette could be regarded as authentically antique if it answered in some way to antique design, just as we have no trouble understanding a modern recording of a Haydn quartet played on gut strings as an artefact of the eighteenth century.

I do not wish to understate the difficulty of starting again. Anna’s studio and its contents were not insured. She is left with the pyjamas she escaped in, her van, her bicycle, and two small wooden boats she has picked up over the years.

However, unlike Clarke, who is still on my sofa, still popping nuts and going nowhere, Anna has already begun to piece her material life back together. Of all the people I know, she is perhaps the most resilient, and certainly the most likely to place this catastrophe in a (part biblical, part alchemical) context of purification and renewal. Thus the first picture to emerge of these events, apart from those supplied by local media, is of her sketching in the rubble. 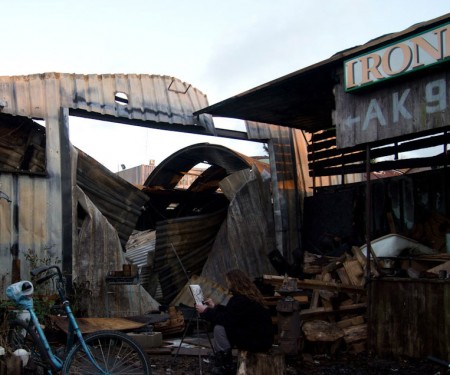