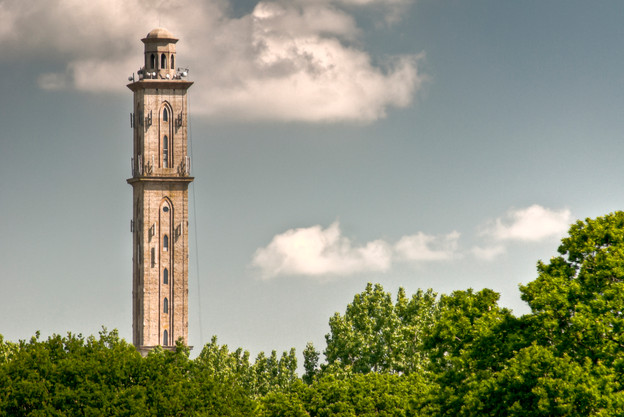 Gwyn Headley visits a magnificent folly ‘built by the ghost of Sir Christopher Wren’, where he was once marooned as an infant by his wicked siblings…

Hampshire’s finest folly — the biggest, the most impressive, the oddest — is unquestionably Peterson’s tower at Sway. Andrew Thomas Turton Peterson was born in Yorkshire in 1813 and died in London in 1906. In the intervening ninety-three years he ran away to sea, became a lawyer, went to India, made a fortune, retired to Hampshire, became a Spiritualist, and built Peterson’s Tower. Even if it isn’t quite the tallest folly in the country its two hundred and eighteen feet and thirteen storeys make it spectacular by any standards. When one adds to that its undeniable ugliness, the stories about the ghost of Christopher Wren, the half-remembered stories of the New Forest Shakers, mutterings about ‘Judge’ Peterson being buried at the top of the tower, and its total unsuitability for the New Forest or indeed anywhere and one begins to realise how compelling this wonderful folly is.

When Peterson, an irascible but soft-hearted radical, retired he found two things to occupy his interests. One was a very real concern for the plight of the unemployed in the locality. The other was a Mrs. Girling, who arrived in the area with her religious troupe known as the New Forest Shakers. The first stirred his conscience; the second started his interest in spiritualism. He brought back from India an interest in concrete as a building material, and finding a ready source of labour in Hampshire he he set to work to build additions and improvements to his estate at Drum Duan, all to his own design and using concrete. Here he met opposition: as a radical he was concerned about improving the lot of his fellow man, as a rich man he could do something positive about it. So he paid his men far more than they could have earned elsewhere in the district, which aroused the wrath of all the other local employers. Peterson was at pains to stress that he never employed someone who was not genuinely jobless, but suspicions remained.

As the work he had employed his men to do neared completion, Peterson began to worry about their future. But salvation was at hand in the comely shape of Mrs. Girling. By an extraordinary stroke of luck she was able to introduce him to Sir Christopher Wren (via a medium) and he was delighted to discover that Sir Christopher was as keen on concrete as he was. Together they planned the tower, and if the finished design does not recall Wren’s work as vividly as one might have hoped, one can only assume that the great architect’s powers had faltered a little after two hundred years or so of death.

Work started in 1879, employing forty men and no scaffolding. The tower rose gradually, not being completed until 1885. It was the first major building in Britain to be built from concrete, and although its continued existence owes not a little to the efforts of Paul Atlas, owner for the past 40 years, it remains a triumphant vindication of Peterson’s beliefs. The estate at Drum Duan became known as Arnewood Towers. Peterson put two concrete slabs in the basement of the tower. When his wife discovered their true purpose she flatly refused to have anything more to do with it, declaring she wanted a good Christian burial like everyone else. So perhaps Peterson was thwarted in an original attempt to build a mausoleum. The rooms were never furnished, and although he apparently intended to install electric lights — the very latest thing — Trinity House forbade him, saying it would be a danger to shipping. They also forbade plans to install illuminated clock faces in the circular holes just below the second cornice. Peterson’s life in India may well have persuaded him that the Indian tower cremation and subsequent interment of the ashes was the cleanest means of disposing of the dead; in any case he had his final wish granted. He was cremated at Woking and his ashes were placed on the concrete table in the tower.

I have vivid memories of being taken to Sway Tower by my wicked siblings when I was no more than five years old, perhaps even in the first half of the last century. Many buildings were derelict or damaged after the war, and a remote folly was easy meat. Someone had hacked away the first seven feet of the concrete staircase, presumably to prevent yet more interior damage, but that was no challenge to a strapping sixteen year old brother who simply swung the unsuspecting infant up on to the first step, where he sat dangling and unable to move. Brother and sisters then happily ran off to play, free from the millstone imposed on them by their mother. When they finally returned they found the child had disappeared, and though careless of his personal fate — probably abducted by gypsies, good riddance — they were sharply aware of the awkward attitude their parents might adopt if they returned to their holiday home without the beamish boy. A frantic hunt ensued, only resolved when an eagle-eyed sister glanced up and spotted a small blond head peering over the parapet 218 feet up. Being unable to climb down from the perch where he had been placed, fear had evaporated into boredom and he wandered up the spiral staircase to the excitingly unsafe top of the tower. 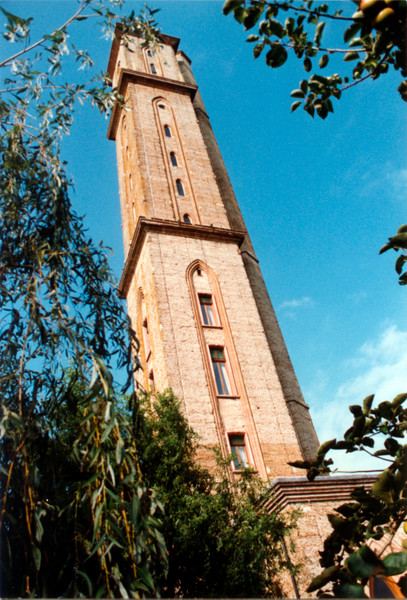 In 1990 Paul Atlas converted the first five storeys into a sumptuous bed and breakfast étape, which allowed guests to climb safely to the top of the tower and stare out over the world from the first and only rural skyscraper.

We deprecate the despoilation of the tower’s exterior, now horribly scarred and compromised by ugly, intrusive mobile phone aerials, an inevitable concomitant of the early twenty-first century. We live in the hope that in time technology will find a way to make these smaller.

This is an extract from Heritage Ebooks’ Follies of Hampshire and the Isle of Wight, one of the county-by-county e-books that form Gwyn’s epic Follies of England series, available to buy for just £2.99 from www.heritage.co.uk.