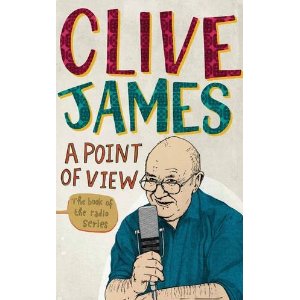 This month’s Dabbler Book Club choice is Clive James’ A Point of View. We’ve got 10 copies to give away to members (join here if you haven’t already), and we’ve got some great and even slightly scandalous Clive James-related posts coming up.

As a curtain-raiser, here’s Nige on Clive…

Radio 4 listeners will know that the ten-minute talks that go out under the (often misleading) title of A Point Of View vary wildly in quality – from the banal and the stupefyingly dull to the mildly interesting, the well crafted and the flashily provocative (yes you, Will Self) to the brilliant and original. This is where Clive James comes in. His six series, broadcast over the period 2007-9, were the real deal: ten minutes of genuine thinking, expertly tailored for the medium and expressed in precisely the right words. Thought-provoking, serious and witty, these were everything a short radio talk should be. And now they have been gathered together in book form.

It’s not the kind of book to read straight through of course, and, on the page, these pieces lose a little something without James’s characteristic delivery. However, A Point Of View (the book) comes with the added attractions of an Introduction, a Conclusion, and, appended to each talk, an illuminating Postscript – all of these written by James with the wisdom of hindsight. The talks take in (to quote the jacket) ‘everything from wheelie bins to plastic surgery, Elizabeth Hurley to the Olympics, 24 to Damien Hirst, Harry Potter to giving up smoking, car parks to Chinese elections, Britain’s Got Talent to the expenses scandal’ – and more. The wheelie bin talk, Attack Of The Wheelie Bins, is actually the first, and one of the best, mixing a comic account of the tribulations of James’s home life with a serious questioning of the received wisdom about what he comes to call later Catastrophic Anthropogenic Global Warming.

CAGW, it becomes clear from several Postscripts and the Conclusion, was a subject James was determined to ventilate – and when he began these talks, to question CAGW was tantamount to heresy or worse. There were dropped jaws all round at the BBC whenever he smuggled the subject into his talks, and on one occasion, he says, it took the personal intervention of the then controller of Radio 4, the excellent Mark Damazer, to let his views reach the airwaves. Looking back, he is glad to see that the CAGW madness has now peaked (though our current government appears not to have noticed), but, looking back over recent years, he laments that ‘The deep story of this period was that journalists had become the last people to question anything.’ CAGW was just one symptom of this malaise.

No one could accuse James of a failure to question – but, however impassioned and serious he is (his other running theme here is a defence of liberal democracy and its values), he never turns sour or declamatory, never loses his essential warmth and sense of humour. That’s a rare gift in a critic of James’s power and range, though it has a downside; sometimes he piles on the witty tropes and paradoxes too relentlessly, as if suffering from a kind of stylistic tic. However, there is no sign of that in the new material James has written for this volume, which brings his seriousness to the fore, along with a strong sense of the passing years and his failing health. Fittingly, his last broadcast talk was Talking About Their Generation, a moving meditation on the richness and transience of life and what one generation passes on to the next. Here and elsewhere, the tone is almost valedictory – though surely, given James’s phenomenal work rate, this won’t be his last book…

Unlike many of the deadbeats who have contributed to A Point Of View, James really believes in the power and importance of broadcasting, and the responsibilities of the broadcaster. I’ll conclude with this credo from James’s Introduction:

‘The business of the broadcaster isn’t to correct abuses. It is merely to point them out, to those capable of seeing the implications. By definition, that audience is already ahead of the broadcaster, so it doesn’t really need him, except for consolation. But consolation can be important at a time when it feels as if the world is going mad. Probably the world always feels like that. But today it raves in a multiform jargon that sounds all the more demented because of its approximation to common reason: the patois of a Bedlam that confers degrees. This peculiarly modern interlingua of unjustified omniscience, now that it is here, will probably never go away. It will always transfer itself to a new area, because there will always be people with an interest in inflating their own importance by distorting reality. But part of reality, a heartening part, is that there will also always be people who know sense when they hear it. To this valuable audience we must be careful what we say…’

And so he was. When it comes to the ten-minute radio talk, nobody did it better.

For your chance to win a copy of A Point of View, sign up to the Dabbler Book Club here (but only if you haven’t already done so, as members will automatically be entered into the draw.)

4 thoughts on “Nige on Clive – Review: A Point of View by Clive James”