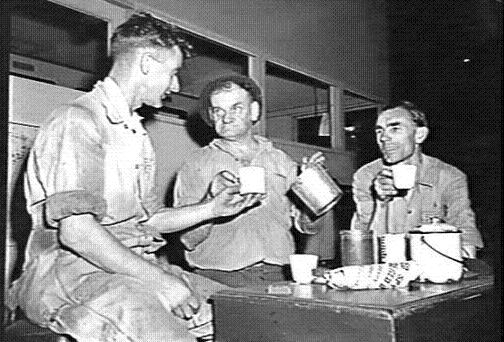 “Uncertified morons are at large and recognisable only when they cause trouble,” according to a remarkable book discovered by Nige in his local Oxfam…

Unlike many charity shops these days, my local Oxfam has a few shelves of older books as well as the usual massed ranks of recent paperbacks. Browsing there one day I discovered, sitting on the bottom shelf, one with a title I could not possibly resist: The Making Of A Moron. This, surely, was the book for me.

I snapped it up, and on examination it proved to be a treatise on the nature of work in modern (1953) society by one Niall Brennan, a man who had clearly tried his hand at many occupations and seen a thing or two. His jumping-off point is the fact that various recent experiments had found that ‘morons’ ( a term then still acceptable) had been successfully employed doing manual work in factories. From this he goes on to argue that modern work in virtually all its forms makes morons of us all. The first two chapters are summarised thus:

I. The Use of Morons.
Certified morons can be fitted into a working community without seeming different from their normal companions; this could be good for them, but if it is only because they are merged into something itself moronic, then it is no good for anyone. Uncertified morons are at large and recognisable only when they cause trouble. It would seem then that the environment has moronic elements. If it has, then instead of improving the certified morons, it will only be pulling everyone else down to their level.

And so it goes on – but, as I say, this was a man who had seen thing or two, and his account of the workers in a paper mill is quite hair-raising:

The workers themselves… were a rabble… loud-mouthed, dogmatic and evil-minded men who had apparently committed every sin in the calendar, and were proud to admit it over lunch without the omission of a detail.

I would never have believed it possible that the sexual life of a man could be revealed with such vigour in such dispassionate activities as rabbiting, the races, football or the comic papers… Not one thing was allowed to pass without its sexual significance being demonstrated to the innocent… There was a certain amount of flippant homosexuality. The organs were occasionally produced or displayed. It may comfort the fashionable ladies who insist upon having their parcels wrapped to know that the paper was freely impregnated with urine. Had Freud lived to see it, he would have been a happy man. Not even Havelock Ellis could have demanded fewer inhibitions.

Crikey. Still, I shall keep this book, for the title.

9 thoughts on “The Making Of A Moron”