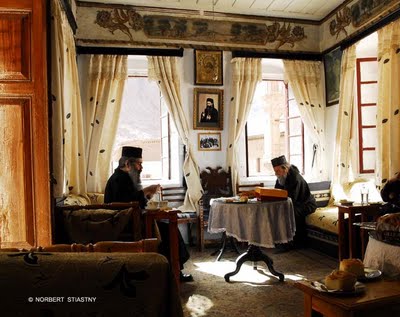 My father-in-law is a photographer, and one of the great things about ‘have camera, will travel’ is that he occasionally gets to go on some fantastic trips. A while ago he was invited to visit the Eastern Orthodox St Catherine’s monastery in the Sinai Desert of Egypt by a friend who’s a scholar and restorer of old bookbindings (he works on incunabula, or books printed before 1501 – a lovely word, if a bit tricky to pronounce).

St Catherine’s – or ‘The Sacred and Imperial Monastery of the God-Trodden Mount of Sinai’, to give it its full Orthodox title – is a fascinating place and staggeringly old and precious. It was constructed in the 6th century making it the oldest working monastery in the world. It also houses one of the greatest collections of ancient documents in the world, second in size only to the Vatican. It’s a quite remarkable survivor: a priceless repository, a miraculously intact relic, but also a living institution.

It managed to attain its great age in such pristine condition as it’s never been sacked. This is down to its remoteness, its great defensive wall, and the political cunning of its monks. It’s probably also due to it sitting on ground that’s holy to all the religions of the book.

It’s reckoned to have the descendant of the original Burning Bush growing in its bounds. The Ten Commandments emanated from the neighbouring mountain, a revelation recognised by Muslims, as well as, of course, by Christians and Jews. A sign of this inclusivity is the presence of a mosque within the grounds of the monastery. (By the way, William Dalrymple’s From the Holy Mountain is an excellent if depressing source for further information on Eastern Christianity’s remaining sites).

The colony of monks has enjoyed plenty of patronage over the centuries. They were great favourites of the Tsar. But the most charming example of generosity is that of two English spinsters who, feeling the monks needed a bit of pampering, fitted out for them a little retreat-cum-library, the Sisters’ House. After masses on saint’s days and holy days the monks can gather here to indulge themselves with sweet coffee and honeyed cakes. They have also been known to take a nip of illicit brandy. One of those small pleasures that helps life roll along pleasantly enough, I’m sure.

Norbert’s photo of this ritual treat is at the head of the post (spot the sticky buns). I’ve also included below a shot of local mounted Bedouin, who provide most of the labour to support the monastic foundation. These are two examples taken from what is a stunning portfolio collected during his stay at the monastery. Some of the others can be viewed at various places on Norbert’s site (including a great shot of an ossuary too).

I think they’d make terrific, interestingly alternative Christmas cards: the bright light, crisp blue skies and stony landscapes are more reflective of the first Christmases than our snow and robins. If anyone is interested in pursuing this please feel free to contact Norbert via his site. 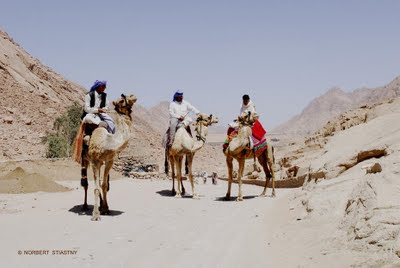