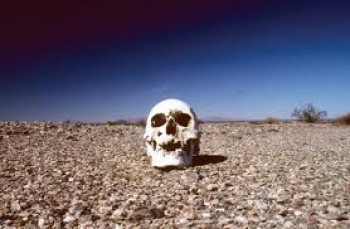 As Texas burns, Daniel Kalder continues to mull over the implications of living in a natural disaster area…

The other night I was working in my backyard when I caught a whiff of smoke on the wind: a barbecue? I wondered. But there were no smoke trails coming from behind my neighbor’s fences; nor could I smell sizzling meat.

I checked the green belt behind my house- no tongues of flame there either. Furthermore, the odor was different, not a wood fire, but rather…. Ah that’s it! It was the same burning plastic/chemical/metal aroma that had hovered over my Austin apartment last year after an angry man had flown a plane into the local tax office, hoping to inflict a mini 9/11 on the IRS (He got there too early, before most of the staff were at their desks, and so killed only himself and one other person).

So it’s a burning building, I thought. OK, time to check the mail. But when I stepped out my front door I immediately noticed a thick pillar of chemical smoke rising from just behind the houses opposite me. Helicopters were buzzing overhead, carrying huge containers of fire retardant, which they dumped on the raging inferno below.

Since Texas is enduring its worst drought in recorded history, I wondered if I was staring at the beginnings of a brush fire that was about to destroy all my possessions and every living thing on my street, including me… you know, the kind of thing you hear about on the news all the time but never imagine could happen to you.

My neighbor was out watering her flowers. She informed me that the flames were currently devouring some houses behind the local post office:

‘They’re not sure how it started. A grass fire, and then somebody’s propane tank went up, and then it spread. They say ten houses have been destroyed so far. We should be safe though…. I just hope nobody’s been hurt.’

I knew the area she was talking about. It’s a poor neighborhood, mostly ‘mobile homes’- cheap, flimsy cabins that can be loaded on to the back of a truck and dumped anywhere. It’s also the old part of town, populated by families that have lived for decades in this formerly rural community, before it became a sleeper suburb of Austin.

Well, I still needed to check the mail so I started walking to the set of boxes at the end of my street. And immediately I noticed something strange. I live in a strange dream landscape of shiny new houses where the sidewalks are perpetually abandoned. Cars and trucks zip in and out of garages, but aside from an old man who I think has Alzheimers and myself, nobody walks anywhere. Texans are often derided for their refusal to walk, but you try going for a long stroll in 107 Fahrenheit…. Unless you carry a tank of water on your back, you’ll feel ill pretty quickly.

Tonight however the street was bustling with life. My neighbors- many of whom I had never seen before- were sitting on their patios, sipping on Cokes, calmly gazing at the uncoiling plume of smoke two miles down the road. Three teenagers were standing in the middle of the street, snapping pictures of the helicopters with their cell phone cameras. A big, fat, bald dude covered in tattoos was washing his car as he stared intently at the smoke. The atmosphere was convivial; as if we were all watching a 4th of July fireworks display and not the (possible) living barbecue of some poor people and the (certain) destruction of what little property they owned. The relaxed attitude however was belied by a spontaneous outbreak of lawn-watering; almost every home owner in the street had turned on his automatic sprinklers, as if those few miserable drops could stave off the spreading fire.

‘Hey, join the party!’ someone shouted.

Texans love a barbecue, I thought.

There was nothing interesting in the mail.

But they were so calm, as if the helicopters overhead had lulled them into the same ‘it can’t happen to me’ sleep we experience when watching something awful on a TV or computer screen. This time they were right; within a few hours, the fire was contained. Nobody died. But fires are popping up all over the place right now. The week before, another local neighborhood went up in flames, while in June a blaze destroyed 60 acres of land, and was lapping at the gates of a luxury housing development before it was extinguished. The helicopters arrived just in time to save the rich folk’s real estate investments.

The poor folk were not so lucky: 15 homes were destroyed. Time to buy renter’s insurance, I think. And to keep plenty of fuel in the gas tank, just in case I need to make a quick getaway.

(RIA Novosti previously published a version of this post).

8 thoughts on “Living in a natural disaster area: fire”