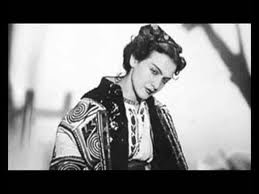 From the archives, a guest post on a great Romanian diva from the remarkable blogger Gadjo Dilo…

Mr. Gaw has kindly offered me the chance to contribute to this estimable blog. I had my own – now suspended due to pressure of work – where I liked to post about cultural life here in Cluj-Napoca, Transylvania, amongst other things. I’ve been asked to introduce myself, so (apart from mentioning that I’m a 47-year-old Caucasian male from Hemel Hempstead, Hertfordshire) I’m going to repeat my blog strap-line: Gadjo Dilo is a 1997 movie by Tony Gatlif about a Westerner who comes to Romania in search of a singer whose voice he loves. Its title means Stupid/Crazy Foreigner in Romani. What happens to him next is my story….

Romanian music deserves to be better known: this is a country rich in musical tradition, augmented by a heady mix of ethnicities and preserved in relative isolation. Gaw and friends may have heard a bit already – and the plunky-plunk back-beat you either love or hate really quite a lot – and may have the impression that, like Elton John and Morrissey, I have a thing for charismatic women who died before the menopause. And so, this post has to be about Maria Tănase, the “Romanian Edith Piaf”. But much as I love Edith – a woman who, surprisingly, for a heart-broken alcoholic heroin addict, regretted nothing…. you’d think she’d at least have once accidentally tucked her skirt into her knickers when leaving the lavatory or occasionally have forgotten to buy enough milk for the weekend, but apparently not – I reckon Maria was better: more versatile, equally (though differently) dramatic, and an ethnomusicologist to boot, making the Parisian sparrer the “French Tănase”, innit. Pretty much all of Romania turned out for her funeral when she died in 1963 aged 49:

Here she’s singing the nihilist classic Lume Lume*, (with a rather extraordinary – for Romania in 1969 – video homage):

A 3rd clip’s gonna be too much of a good thing for some. But anyway here she is now in the flesh getting shouty – typically, it has to said, for much of this music seems to be based on folk songs belted out across the valley to one’s sheep:

* World, world, sister world
When will I have enough of you
When I give up bread for Lent
And the glass will give up on me
When they hammer the nails on my coffin
When they put me in my grave
That’s how the world is, transient
One is born, another dies
The born one suffers
The dead one rots