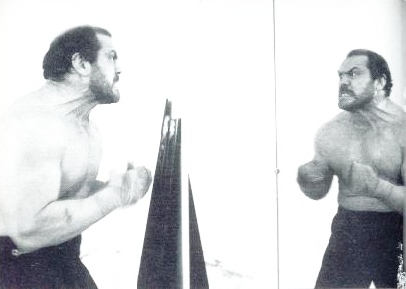 In about 1996, I got a deal to write a book about unlicensed boxing. I was arrogant enough to think I could actually write a book. I wish I had the excuse of being young, but I wasn’t really. I was just younger, which is no excuse at all. What I needed, in retrospect, was someone like Lenny McLean to come round and punch me in the face, put me straight about a few things. Not that Lenny would have wasted his time on what he’d certainly have called a muggy straight like me. He was a man in possession of an arcane and almost impenetrable moral code, applied utterly inflexibly with his fists.

Just as boxing, in its last great era, had Ali versus Frazier and Hagler versus Leonard, the unlicensed game had Lenny McLean versus Roy ‘Pretty Boy’ Shaw. Instead of championship belts and millions of dollars, they fought for a few hundred quid and the nebulous title of ‘Guv’nor’ in places like Croydon and Finsbury Park, and yet their three fights represented a sort of high water mark for the unlicensed game. The venues for the bouts – a nightclub called The Cat’s Whiskers; the Rainbow – quickly sold out. The build-up was covered quite extensively in The Sun. Roy Shaw even appeared on the front of Time Out, under the coverline ‘Still The Hardest Man In London’. What they were doing wasn’t illegal, just not licensed by the British Boxing Board of Control. The reason that they attracted so much interest was the promise of action. Some of Lenny’s fights weren’t just finished in the first round. They were over before the first bell. When he fought Mad Gypsy Bradshaw, Mad Gypsy headbutted him as the introductions were made – Lenny dabbed his forehead with a giant glove, battered Mad Gypsy to the floor and then stomped on him. It was what the crowd had come to see, hard, hard men tearing at each other without ceremony.

If I’d had any sense, I would have written the whole book about this era and based it around Lenny’s fights with Roy, because it was a lost time, a lost place. I did find Roy, who was by then in his sixties and living alone in a bungalow in Essex. I rang him up and asked if he would see me. He agreed. He gave me directions, and even offered to stand in his garden until I drove past so I wouldn’t miss the turning. I spent a remarkable afternoon in his company. He was still fit and strong, with small, bright eyes under a low brow and an upper body that would shame men half his age. On his dining room table he had laid out the mementos of his life. There was the Time Out cover, a belt presented to him after one of his fights, lots of photographs, even a boxing encyclopaedia that contained his professional record – ten wins achieved under the name of Roy West when he was a young man on the run from prison. He served tea in delicate china cups and told me the story of his life, which was fascinating and sad. He’d been a wild kid imprisoned for armed robbery and once he’d got inside, his depthless rage at authority meant that he couldn’t get out. He’d had the cat o’nine tails, broken through a cell door with a chair leg, taken part in a riot or two, fought the system until they gave up and sent him to Broadmoor where, he said, he was warned by a doctor that he might never get out. He did, finally, and it was then that his fearsome reputation was put to work in the ring and on the streets. Roy was wild, but he wasn’t stupid, far from it, and he’d made a considerable amount from property deals. He had a Bentley on the drive, the bungalow was paid for, he had money in his pocket. He was also alone, and there was an abiding melancholy about that.

Lenny was still alive, but not well. Roy had heard that he had a brain tumour. ‘I’m sorry for him,’ he said, ‘but I still don’t like him’. Someone gave me a number for Lenny, but it transpired that he was writing a book of his own and probably wouldn’t have wanted to be interviewed even if he had been well enough. I didn’t think much about his book at the time, I was too wrapped up in what I was doing, but before long The Guv’nor was a bestseller and the publisher, a very clever man called John Blake who had once ran the Sun’s Bizarre column, had created a new genre in publishing, the hard man memoir.

As with many of these things, it was a matter of timing. Later in his life, Lenny had undergone a remarkable career change and become an actor. He wasn’t exactly giving Stratford his Iago, but he’d been in a TV series called The Knock and had just filmed a low-budget gangster flick titled Lock Stock And Two Smoking Barrels. Along with the hard man memoir came UK gangster chic, and Lenny had a hand in both.

He didn’t live to see them flourish and then stale. The last page of The Guv’nor announces his death in large black type. But in the place of his life came myth.

The book itself is a straightforward piece of work told in an authentic voice by Peter Gerrard. Lenny emerges from its pages as a sort of insane version of a contemporary, London-based Robin Hood, dispensing justice ‘on the cobbles’ via his giant fists (‘I never needed guns or knives…’). His employment of the underworld code is remorseless, yet so is his acceptance of it. ‘Got myself shot, love,’ he announces perfunctorily to his wife Val when a mystery gunman hits him in the backside. ‘You can f*** off, because I’m saying nothing,’ the policeman next to his hospital bed is informed.

McLean is a footsoldier in this world, hired muscle for your pub or club or meeting, a man sent out to evict squatters with a simple ‘we’re changing the locks mate’, to calm a rough bar by sitting at a corner table nursing an orange juice. But muscle has its rank, too: there can be only one ‘guv’nor’. It is not a title easily attained. Lenny’s quest begins in a second-hard car yard and takes him to Epsom Downs and various backrooms and waste grounds before he ascends to the fights with Roy Shaw. He wins the second and third of them, and crowns his unlicensed career in New York, defeating a man called John McCormack in a mob-owned warehouse before a crowd said to have included Sylvester Stallone, Gene Hackman and Christopher Reeve.

The Guv’nor concludes with Lenny beating a dubious murder rap at ‘the Bailey’ and the discovery of the cancer that will kill him – poignantly, a final holiday sees him unable to lift his suitcases from the boot of a cab.

John Blake commissioned an autobiography from Roy Shaw, too, and it joined The Guv’nor on the bestseller lists. Many more followed, and they adopted Blake’s visual language for their covers: black background, glowering headshot, menacing quote (The Guv’nor’s was ‘I look what I am – a hard bastard’). It was a strange legacy for Lenny.

Having met Roy, it was funny to imagine him reading Lenny’s book. Roy had mentioned that Lenny had in fact been beaten several times in the unlicensed, once by himself, but also twice by Johnny Waldron and twice by Cliff Field. Only the loss to Roy was in The Guv’nor, and that Lenny blamed on a pair of boxing gloves that kept springing open on him. For Roy’s part, he blamed one of his defeats to Lenny on the fact that he’d taken some Royal Jelly before the fight in the belief that it would ‘buzz me up, make me like a terror’. Like all fighters, that level of self-justification wasn’t just excuse making. No man tells himself he’s going to be alright more often than a boxer does. He might not use those words – Ali had his poems, Tyson said stuff like ‘I’m going to eat your children’ – but they all meant the same thing. Because their bodies are vulnerable and their skills are pregnable and their hearts are breakable, they psyches must be impenetrable, and there’s only one way they can do that.

So Lenny had his myths and Roy had his, and no doubt so did Cliff Field and Johnny Waldron and everyone else. It was a pre-internet era, and the fights and the fighters grew in the telling. These were the secret, underground events of a clandestine world. The participants like the fact that it was clandestine, too, they played up to it, imparting slithers of stories here and there. Only the success of the books brought it out into the open. The fight films, like out-takes from the Sweeney yet grimily, viscerally authentic, are up there on You Tube. Wikipedia announces Lenny’s defeats, Amazon has a cottage industry of books and DVDs. Hard man has become a potential career choice.

In a way, Lenny did leave me with a decent clip round the ear. The book I wrote was awful – pretentious, worthy, overdone, a real bottom-drawer effort. The book he produced was the opposite of that. It was a hard lesson.

The man who’d given me Lenny’s number also told me a very funny story about the time he met the guv’nor. He went round to Lenny’s house and was shown into the front room, where Lenny was on the phone.

Lenny slammed down the receiver, and rose up from his chair. ‘F**ing BBC,’ he said. ‘Never pay you, do they…’

Jon is the author of The Years of the Locust and Muscle.

Do you know of a neglected classic that Dabbler readers should pick up for a penny? Email editorial@thedabbler.co.uk with your nomination and review.

This article originally appeared on The Dabbler in October 2010.