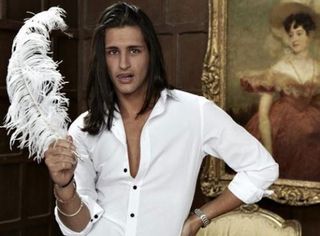 After reality shows like Big Brother and its spawn, the new programmes that are denounced as representing all that is low in British television are The Only Way is Essex (now on the ITV Player), and Made in Chelsea (E4, Mondays 10pm). These programmes are “structured reality” and are meant to show real people living out their lives, but with the guidance of producers who tell them to act out situations – a break up, a proposal, a row between two rivals and so on.   Made in Chelsea is about posh young people in Chelsea, The Only Way about unposh young people in Essex.

I liked the idea of getting people to enact their ambitions and desires on television and was wondering how you could apply this formula to, say, dons as scripted by C P Snow.  The Oxbridge Originals deals with the Fellows at Worcester College.   The Reader in Chemistry and the Senior Tutor in Metallurgy are both after the mastership and various half-whispered scenes in common rooms and in pubs about the jockeying for election take us through the eight episodes.   Awkward situations, indiscretions after too many whiskies and betrayals and disloyalties would entertain the viewer. No Fellow would ever discuss his subject, ever.

In The Only Way and Made in Chelsea there are many young women characters who look quite alike, and when they turn up “Lauren” or “Milly” appear in white letters against them, so you can keep track of who’s who.  In my Oxbridge Originals series when yet another middle-aged bloke in a tweed jacket appeared, he would be marked with Emeritus Fellow in Economics and Visiting Fellow in Law.  The last episode would end with the election to the Mastership – is it that sly, smooth Reader we have come to distrust or the volatile, outspoken Senior Tutor?  The camera lingers on the half suppressed glance of despair or triumphalism of the two candidates.

Given that universities are always short of funds a college could sell this series to avoid hiking up the tutorial fees.

I have been taught that you should read a book or watch a television programme before commenting on it so I thought it was fair to see The Only Way and Made in Chelsea.  Well, I have to say I found them pretty entertaining.  I don’t believe these are ordinary people acting out their real lives.  For instance, they are far better looking than the average with excellent teeth – this goes for the posh and the unposh.  If they are not real people, shouldn’t Equity be on their case, as they do seem to be acting or attempting to do so?

The characters are  exotic yet familiar.  They are from parts of the UK that I’ve visited where I have overheard people talking like they do.  So I observe their social habits with interest.  With the Essex lot I actually felt for the girl who was sitting with friends when she heard that the man she loves had just proposed to someone else, and had to to keep face and hide her distress.

The Essex gang have been described as “chavs”*.  Why? – they all seem to be solvent, and are well disciplined – they go to the gym and make an effort to be well-dressed. As for the Chelsea set, except for the bloke who deals in diamonds, it’s unclear what their jobs are and how they are all so rich.  Do English trustafarians have that amount of money?   I thought the native English could not afford to live in smart parts of London any more, this property having been bought up by Russian oligarchs.  The London of theirs is amazingly clean and beautiful, with occasional shots of Carlyle’s statues, lights on the embankment and other tourist shots.

I was reminded of the popular This Life, which was about graduate lawyers, and Attachments, about a website company.  The young people were equally self-involved, though slightly more repellent and there were more shagging shots.  They were photographed in the close-up, watch for the reaction, documentary style.  After an episode or two I lost interest in them and I think I have finished with Essex and Chelsea. But I can’t get in a lather about this kind of soap. They are about a lot of pretty young things with the time and energy to fall in and out of love.

I have always found the Bright Young People extremely tedious. The gay life seems dull and stupid to the onlooker, but the moralist is unwise to judge it harshly. It is as absurd to be angry with the young things who lead it as with a litter of puppies scampering aimlessly around, rolling one another over and chasing their tails. It is well to bear with fortitude if they cause havoc in the flower beds or break a piece of china. Some of them will be drowned because their points are not up to the mark, and the rest will grow up into well-behaved dogs. Their unruliness is due only to the vitality of youth.

*The definition of “chav” is not fixed

Dabbler Review is brought to you by Glengoyne single malt whisky,
the Dabbler’s choice.