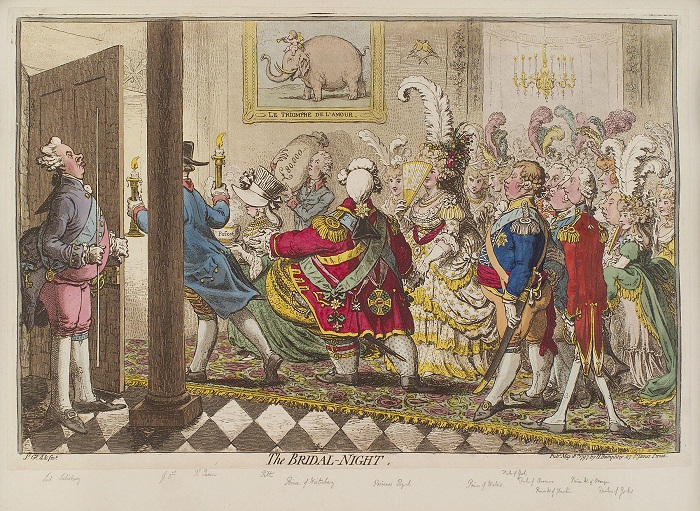 The last time this happened I spent the morning at Wormwood Scrubs. My friend had had two tons of grass in a garden shed. Coppers in camo and blackface materialised in his vegetable patch at 0400 hours.  Yes, that sort of grass. This time, well, we’re all older if not wiser, my friend’s long since out and, having as I do diabetes, I have a low tolerance for the sickly in whatever form. Two billion others are seemingly immune. For them, and for  Dabblers everywhere, Green’s (Extremely Small)  Dictionary of Nuptial Slang. Far be it from me…

and did he marry poor blind Nell? phr. [play on the clichéd conventions of popular fiction; allegedly from a late-19C ballad] [1910s+] a phr. used to imply one’s disbelief in the previous statement.

church key n. [the similarity in shape of the WWII US forces GI can-opener and an old-fashioned key; some form of opener had been required since beer-cans were first merchandised in 1937] [1950s+] (US) a can-opener

go to Westminster (for a wife) (v.) (also go to (St) Paul’s for a wife) [16C proverb: ‘Who goes to Westminster for a wife, to St Paul’s for a man or to Smithfield for a horse, may meet with a whore, a knave and a jade.’ Despite the supposed difference indicated in the proverb, Old St Paul’s Cathedral was also well-known for the raffish individuals who frequented its purlieus] [late 16C–early 19C] to visit a brothel.

husband game n. [mid-19C] (US Und.) a confidence trick where a prostitute has her ‘husband’ knock on the door after she has been paid but before she has performed.

husband’s tea n. [? a husband’s inadequacy as opposed to that of a lover] [mid-19C] very weak tea.

king’s picture(s) n. (also pictures of his majesty) [the royal features as engraved or printed on money] [mid-17C–mid-19C] money.

marry Mistress Roper (v.) [the flogging at the ‘rope’s end’ that a recruit would have to endure and because such recruits handle the ships’ ropes ‘like girls’] [mid-19C] to enlist in the Royal Marines.

queen for a day n. [2000s] (S.Afr. gay) an ostensibly heterosexual married man, who has sex with men and then returns home.

shotgun wedding n. (also shotgun job, shotgun marriage, shotgunner) [the image of the aggrieved father holding a shotgun to the reluctant groom’s back] 1  (orig. US) a wedding that is forced on the groom through his girlfriend’s (soon to be bride’s) pregnancy; thus shotgun baby n., the child that precipitates such a union

Westminster wedding n. [mid-17C–early 19C] ‘A Whore and a Rogue Married together’ (B.E.); a visit to a prostitute.

where the queen goes on foot n. [19C+] (also where the queen sends nobody) [note Urquhart, Gargantua & Pantagruel (1653): ‘Cagar. Spanish. To do that which the king himself can’t get another to do for him’] [20C+] the lavatory.

wife out of Westminster n. [18C–19C] a wife unconstrained by monogamy.

wife in watercolours n. [18C-19C]  [the image of colours fading as do the passions of the newly married or the idea that the loving (if essentially hired) mistress was less strident than an intolerant harridan of a wife. Watercolours, suggests Grose 1785, are, like mistresses, ‘easily effaced, or dissolved’] [late 18C–early 19C] a mistress.