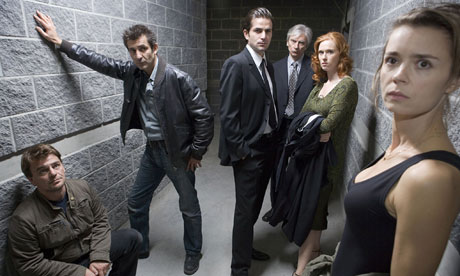 The third series of Spiral (in France: Engrenages, meaning not in fact ‘Spiral’ but ‘Gears’) is currently running on BBC Four and has received a modicum of hype as a replacement foreign crime series for the runaway Danish hit The Killing (reviewed by The Dabbler here).

Now I’m not often ahead of the curve in these matters but as it happens I have seen the first two series of Spiral on DVD, and am therefore ideally positioned to bring you The Dabbler’s Complete Guide to French Police Drama Series Spiral.

The first thing to say about Spiral is that it offers the nastiest, filthiest, most unromantic depiction of Paris imaginable. The sun never shines; everything is broken or dirty or both; and nobody is ever at all nice to anybody else. In the first two aspects it is therefore an unrealistically pessimistic exaggeration of Parisian reality. I leave you to make your own judgement about the third.

The very first episode of the first series opens with the view of a horribly mutilated female corpse on a rubbish dump, and it gets worse from there. In fact, the sheer unremitting disgustingness of Series 1 – which includes the ultimate Amis-ian taboo, dead babies – becomes almost comical in its Pythonesque excess. Where it isn’t comical it’s plain irritating, though not as irritating as the thing that really lets down the first season, which is the hairstyle of the lead character Police Captain Laure Berthaud.

Laure, we are asked to believe, is a tough no-nonsense female detective who through sheer force of personality has reached seniority sufficient to lead a bunch of police bruisers through the meanest streets of the Parisian banlieues. And yet for the most part all she does is mince round in a pretty little strops flicking about this daft schoolgirlish ponytail. That ponytail, I’m afraid, undermines the credibility of the entire enterprise.

For these reasons I almost gave up on Spiral, but I’m glad I didn’t because Series 2 makes a quantum leap in quality. The writers are less obsessed with trying to rub viewers’ noses in the worst befoulments of human perversion and instead offer a multi-layered and twisting plot about the rise and fall of a drugs gang. Admittedly, it owes a lot to The Wire in its exploration of the structural hierarchy of the gang – from lowly street-dealers up to the mansion-dwelling bosses – but it convinces and grips. Better yet, Police Captain Laure Berthaud has had a sensible crop and all of a sudden the thing is believable.

Series 2 also features a marvellous monster in the form of rapper and middle-ranking gangster Aziz – like Stringer Bell in The Wire, we don’t half miss him when he goes – and indeed it is in the supporting characters that Spiral really excels. The leads are fairly vapid – Berthaud (Caroline Proust) is hampered by that hairstyle; Deputy Prosecutor Pierre Clément (Grégory Fitoussi) has little to do except march around being morally upright and unreasonably handsome – but below them are some corkers. In reverse order of brilliance: 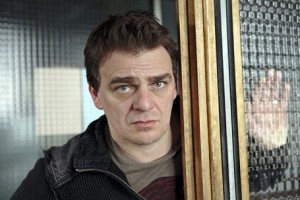 Police Lieutenant Gilles “Gilou” Escoffier (Thierry Godard) – the Cartman of cops, Escoffier is incompetent, indifferent to the rules and, even for a Frenchman, breathtakingly rude. He’s also addicted to drugs. For quite unfathomable reasons, Berthaud is loyal to him and covers up for his bewilderingly frequent cock-ups. 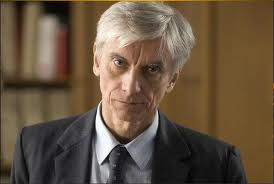 Judge François Roban (Philippe Duclos) – After two series of Spiral, I’m still baffled by the French criminal legal system (if you can help, please do), but Roban (above) is a sort of prosecuting ‘juge’ (pronounced joooooooooooge): a heroically self-regarding know-all who looks like a cross between Arsene Wenger and Worzel Gummidge and who continually emphasizes his intellectual superiority with that bony-fingered ‘steeple’ gesture usually employed by middle-aged male GPs when they’re explaining that there’s nothing at all the matter with you and that a quick listen with the stethoscope tells them infinitely more about your condition than all the irrelevant twaddle you’re spouting about how you actually feel could ever do.

Roban would be the Frenchiest Frenchman imaginable, where it not for… 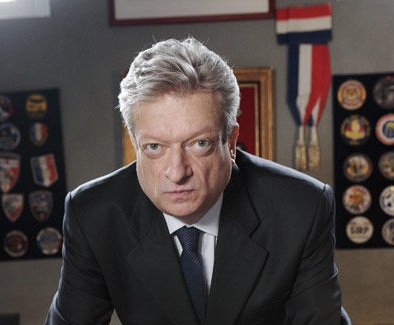 But best of all is Lawyer Joséphine Karlsson (Audrey Fleurot) – a sizzling ginger Lady Macbeth; a hot, bad Catherine Tate; Karlsson is the amoral ladder-climbing lawyer who steals every scene in which she appears, and there are far too few of those. Physically she doesn’t look particularly French – too Celtic – but the terroir of her haughty sulk is unmistakable. 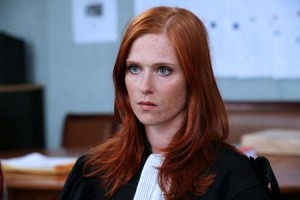 All of the above reappear in series 3 of Spiral, currently showing on BBC Four and available on the iPlayer. How is it faring thus far? Well it’s not The Killing, but having seen the first two episodes I’m pleased to report that Roban is as bony-fingered as ever, Karlsson is still sizzling and sulking and Marchard is as bug-eyed and froggish as any English xenophobe could wish.

In that respect, it’s well worth a look. But there are disturbing signs of a return to the pitfalls of Series 1. It opens with the view of a horribly mutilated female corpse in a rubbish bag. And even more worryingly, Police Captain Laure Berthaud’s hair has started to grow again…