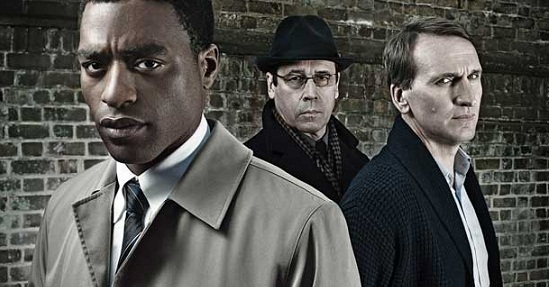 The Shadow Line starts beautifully. We are in pitch darkness and then two pale lights (fireflies? flares?) trickle down the screen, eventually revealing themselves to be torches borne by policemen, viewed from directly overhead, as they approach an abandoned car. In the back seat is a corpse, a big, fresh one. A gnarly-faced copper lies full length across it to grimace at the bullet holes in its head. So far, so good. But then the copper starts speaking, and the problems start.

Perusing the internet I have already seen The Shadow Line compared, with crashing tone-deafness, to both French cop drama Spiral (reviewed by The Dabbler here) and, inevitably, The Wire. It couldn’t be further from them. Spiral and The Wire aim for verisimilitude through the use of naturalistic acting, rapidly mumbled dialogue and jerky, follow-me-down-the-corridor cameras. The Shadow Line, by contrast, is a Drama. It aims for Truth, and verisimilitude doesn’t come into it.

It is written, produced and directed by Hugo Blick, who has an excellent track record in the kind of middle-highbrow telly that commissioners can confidently point to when accused of chucking the license fee away on trash; and it’s clear that a fair bit of whatever paltry sum Doctor Who leaves of the BBC drama budget has been placed in his hands. The commissioners might come to regret it. I wonder if they sighed or cheered when Blick announced that he wanted to enter East End gangland? Many have come a cropper in the well-trampled world of drugs, pubs and faay-milies  (except for Guy Richie, who has come a cropper when trying to leave it.)

Blick has previously specialised in the monologue (the brilliant Rob Brydon tragicomedy Marion and Geoff; The Last Word Monologues), which takes great skill to do well but is the most unnatural possible form of drama. There’s no dialogue in The Shadow Line: the characters do not converse with each other, they either  perform alternating monologues or utter portentous one-liners which sound suspiciously like Blick might have jotted them down in a notebook he always carries around entitled “Good Lines I’ve Just Thought Of, Which I Must Use Some Time”.

Some of those lines are pretty good, but more are laughable. A particularly bizarre press conference scene in which a police spokesman declares that “Even if you drew your last breath on the Titanic you still woke up that morning to a beautiful day,” brought to mind Eric Cantona’s seagulls and trawlers.

The cast is mixed. Rafe Spall is absurdly mannered and unconvincing as a psycho gangster, but Christopher Ecclestone is good, and Chiwetel Ejiofor as Inspector Jonah Gabriel (pity about the thudding Bible-reference name), who is assigned the case despite having a bullet in his head which has erased crucial chunks of his memory, does his best with a script that screams “Look at me! I’m a clever script!”, and a direction that demands everyone act as slowly and gnomically as possible. ‘Pinter-esque’ is the obvious comparison. I don’t like Pinter, but if you do, you might get more than me out of The Shadow Line. Stephen Rea and Antony Sher haven’t even appeared yet, so it’ll still be worth giving them a chance to rescue it over coming episodes, and the no doubt highly-twisty plot might well entangle us yet.

I don’t want to hammer this too much because the BBC has done what it’s so often accused of failing to do: taken a bold risk on an auteur. But then the problem with bold risk-taking is that you’re just as likely to end up with a turkey as an award-winner, especially if making a big, portentous drama and allowing one clever artiste to script, direct and produce.

As Spinal Tap’s Nigel Tufnel so memorably put it, it’s such a fine line between clever and stupid – henceforth we might even be calling that thin divide ‘the Shadow Line’.