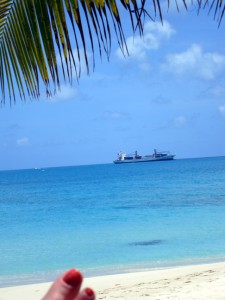 You may not have noticed my absence, but I thought I’d share a glimpse of what I’ve been up to for the past week or so. It’s been very relaxing here. Just the occasional interruption of the blue horizon by a passing yacht… although when I spotted a banana boat, I was moved to reach for my camera – hence the curious angle of this shot, which, of course, has nothing to do with a preprandial tipple. 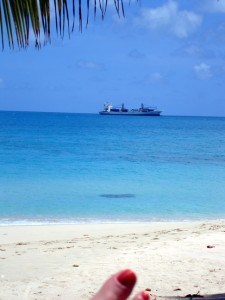 Thankfully, the boat righted itself, and I followed its path, through oil-smeared sunglasses, as it pootled along – eventually disappearing behind a large rock. 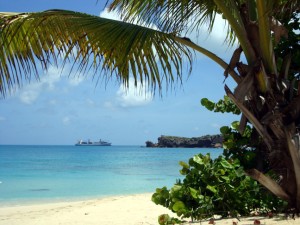 Inspired by a documentary on BBC somethingorother, I’ve been thinking that, when I reach a ripe old age, it might be rather nice to take a trip on a banana boat. Any record of that programme seems to have disappeared without trace, but from what I recall, the small group of paying guests had a whale of a time (excuse the holiday spirit talking). There were old fashioned games, such as curling, on deck; there was even a swimming pool – and, presumably, one could always laze about under the shade of a derrick. Best of all, there were extremely boozy, nightly dinners at the Captain’s table. 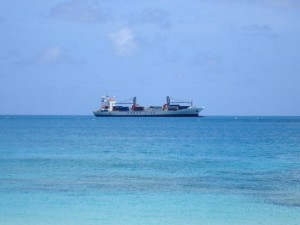 I suppose the only drawback is the time it would take to cross whole oceans at what looks to be a snail’s pace. And I guess you’d have to get along pretty well with the other passengers from the outset. Unfortunately, I also discovered another major obstacle, when my search on the internet drew a blank: I’m not sure it’s actually possible to travel by banana boat any more.

However, I did manage to find a couple of shipping lines that offer cruises on other types of container ship. It appears you can now voyage around the world in 84 days on ugly French lumps of iron with exotic sounding names like Matisse, Manet, Wagner and Bellini.

Which brings me nicely back to my empty glass… I’d better be off to lunch now. Tomorrow I’ll be back at my computer – the mere thought of which is enough to make me go bananas.