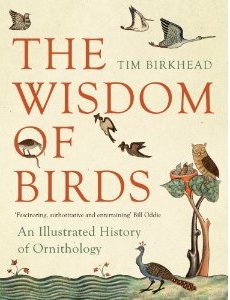 Tim Birkhead’s book The Wisdom of Birds: An Illustrated History of Ornithology was described by The Telegraph as “one of the most entertaining, informative and enthusiastic accounts of the history of ornithology” and was voted ‘Best Bird Book of Year’ by The British Trust for Ornithology and British Birds.

In an exclusive post for The Dabbler, Tim looks at the history of our ‘knowledge’ of birds…

Where did our knowledge of birds come from? How do we know what we know about birds?

Answering that question was what motivated me to write The Wisdom of Birds. The book is a history of ideas: how twaddle was transformed into truth. The book’s title comes from a volume written by the man responsible for launching a scientific approach to natural history. John Ray’s book, The Wisdom of God, first published in 1691, transformed the way we think about the natural world, and about birds in particular. It is thanks to him that we abandoned folklore in favour of facts.

It was hardly a sudden transition, and in some cases it took several centuries for us to discover the truth. Let’s take migration as an example. That most ancient of authorities on the natural world, Aristotle, writing in 300BC, was fairly convinced that many birds migrate to distant lands for the winter. But then he went and spoiled it by saying that there are some birds – like the hoopoe – that ‘sleep in winter like the bat’. In other words, they hibernate. The idea took hold, and over the ensuing centuries hibernation became an increasingly plausible explanation for the disappearance of birds each autumn. 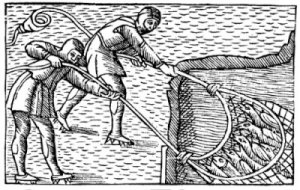 For centuries Aristotle was the ultimate authority on natural history matters. If he said it was true, it was. The idea that birds hibernate rather than migrate was given extra credence in the mid 1500s by Olaus Magnus, Archbishop of Uppsala, who having heard that swallows had been found ‘unconscious’ – hibernating at the bottom of lakes in mid-winter, decided to illustrate it. For his book, History of the Northern People the archbishop commissioned a woodcut showing fishermen drawing in their nets from a winter lake full of fish and swallows. They say a picture is worth a thousand words, and I’m sure that this particular image fixed the idea of hibernation indelibly in the minds of all who saw it. It would be rather like someone today showing you a picture of something unlikely on their iPhone saying: ‘Look – here’s the evidence, you can’t dispute it’. At a time when people still believed in unicorns, is was all too easy for folklore to become fact.

Two hundred years later, our patron saint of natural history, Gilbert White, continued to cling to the notion that birds hibernated, even though most ornithologists of the late 1700s had abandoned the idea. Gilbert White was a bit of a romantic and simply liked the idea that his favourite birds, swallows and martins, were close by, albeit out of sight, during the gloomy winter months.

With the first recoveries of ringed birds in the early 1900s migration became an indisputable fact.  Bird ringing started in the late 1900 and a swallow ringed in southern England on 6 May 1911 was found eighteen months later in Natal, southern Africa on 23 December 1912. Others followed. More recently new technology, in the form of tiny ‘geolocators’ (which record day length from which one can deduce latitude and hence location) have allowed ornithologists to track birds, like the nightingale, as they leave the UK, fly south into Africa and return the following spring. Fabulous!

In The Wisdom of Birds I look at all the major events in the lives of birds: how their eggs are fertilised; how they grow up; how they acquire their songs; how they obtain a territory and a mate; why some are promiscuous and others are monogamous; how they live and when they die. I then track back in time to work out how, whom and when our knowledge of these aspects of birds lives were discovered. You can see a lecture on some of this here.

The Wisdom of Birds is available from Amazon here.

6 thoughts on “Tim Birkhead on The Wisdom of Birds”