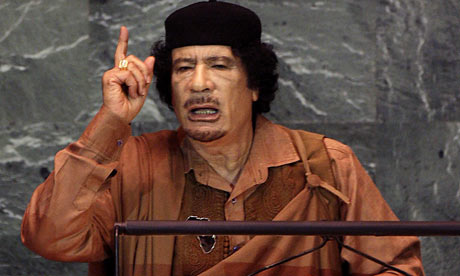 In an occasional series Daniel Kalder examines the literary endeavours of the world’s dictators. First, a topical look at the oeuvre of Muammar Gadaffi of Libya.

A mumbling, murderous, Ukrainian nurse-fondling tyrant he may be, but – even as American bombs rain down from on high – you’ve got to hand it to Muammar Gaddafi: the man has staying power. Born in 1942, he led the coup against the Libyan monarchy in 1969 – the same year Sesame Street debuted on US television. He’s as old as ineffably boring Sir Paul McCartney, his regime as venerable as Big Bird. And, like many dictators, he fancies himself as a writer.

Gaddafi’s most famous literary work is The Green Book, published in 1975. This treatise on “Islamic socialism” defined the concept of Jamahiriya, a state without parties that would be governed directly by its people. Which, in practice, translates as a military dictatorship, headed by – you guessed it – Gaddafi! His subsequent volume, Escape to Hell, is less well known. Marketed in the UK as a single collection of short stories and essays, it is in fact an amalgamation of two books: Escape to Hell (1993) and Illegal Publications (1995). Of course, while it’s safe to say that all works of dictator literature are to some extent fictional, few tyrants have tackled the art of Chekhov and Maupassant. I was quite excited to see how the colonel fared.

One of the first things I learned is that Gaddafi has little grasp of literary classifications. The texts in Escape to Hell are, alas, not short stories but rambling prose feuilletons. There are no characters, no twists, no subtle illuminations; indeed, there is precious little narrative. Instead, you get surreal rants and bizarre streams of consciousness obviously unmolested by the hand of any editor.

One of Gaddafi’s major themes is hatred of the city, which he views as a monster that alienates, isolates, crushes the spirit, separates man from God and so on:

This is the city: a mill that grinds down its inhabitants, a nightmare to its builders. It forces you to change your appearance and replace your values; you take on an urban personality, which has no colour or taste to it… The city forces you to hear the sounds of others whom you are not addressing. You are forced to inhale their very breaths… Children are worse off than adults. They move from darkness to darkness… Houses are not homes – they are holes and caves…

Gaddafi is a Bedouin, opting to live in a tent under the desert sky rather than in a palace, so to some degree his horror of city life is understandable. But he’s surely laying it on a bit thick here:

Yesterday a young boy was run over in that street, where he was playing. Last year a speeding vehicle hit a little girl crossing the street, tearing her body apart. They gathered up her limbs in her mother’s dress. Another child was kidnapped by professional criminals. After a few days, they released her in front of her home, after they had stolen one of her kidneys! Another boy was put into a cardboard box by the neighbourhood boys in a game, but was run over accidentally by a car.

Apparently, city folk also watch cockfights and football, both of which are bad. The village is far superior: a place where “physical labour has meaning, necessity, usefulness, and is a pleasure besides. There, life is social, and human; families and tribes are close. There is stability and belief. Everyone loves one another…” etc, ad nauseam.

Slightly more interesting (and almost a story) is Suicide of the Astronaut, in which a man visits the moon, finds nothing, and upon his return to earth discovers that his qualifications as a space explorer leave him, like an arts grad, unable to secure useful work. He commits suicide. Thus, Gaddafi seems to be stating that space exploration is, well, a load of bollocks. In the title story – a truly unhinged free-form eruption of useless words – Gaddafi declares that it was an “Arab prince”, not Columbus, who discovered America. The rest is incoherent blather. In Death, he tackles the pressing question: is death a man, and thus to be fought, or a woman to whose tender embrace we must surrender? I won’t ruin the ending for you.

Yet, while Escape to Hell is undeniably awful, it is not uniformly so. Gaddafi has a real gift for invective: he can spew with the best of them. He can also do sarcasm, and there are several entertaining passages in which he ridicules the obscurantism of Islamists (“How can we move ahead, while we still do not know… Was the camel of Ali, may God preserve him, white or brown? Was Othman’s shirt made of cotton or nylon?… Should a beard be dyed with henna or shampoo?!”). In fact, Gaddafi himself likes to load his prose with allusions to the Qu’ran, even though he has frequently been quite “liberal” in his interpretation of Islam. In the 1970s, for example, he openly denigrated Mohammed, and even funded an American Jesus sect, the “Children of God” – who, in turn, venerated him as a messianic figure.

In his foreword to Escape to Hell, Pierre Salinger, a former JFK aide and the chief proponent of the theory that it was Iran and not Libya who carried out the Lockerbie bombing, argues that by reading Gaddafi’s thought we shall come to a better understanding of the man, thereby seeing past the crude, scary construct of the western media. He’s correct, of course – and what we find is a mind that cannot follow a coherent thought for very long, is filled with crude dichotomies and nonsense, and rambles along at random, collapsing in on itself before exploding outwards again in a burst of surreal gibberish.

And speaking of exploding, whatever happens to Gaddafi in the next few weeks, one thing is certain: his demise won’t be much of a loss to the world of literature.

(A version of this post originally appeared on The Guardian’s Books Blog).