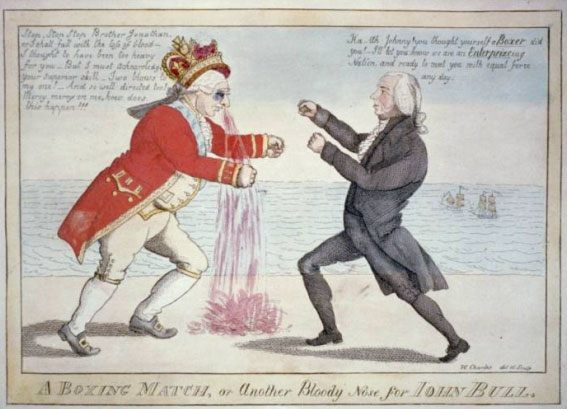 Jonathon Green – visit his website here – is the English language’s leading lexicographer of slang. His Green’s Dictionary of Slang is quite simply the most comprehensive and authorative work on slang ever published. Today, fisticuffs, as Jonathon fibs you right in the claret-spout with his fambler…

To pick up where we left it last week, it’s all sorted: men do not scold. And nag? heaven forfend. Men shout. Loud, vain, futile. All that stuff. Gobshites, basically. But men also hit. How do I wallop thee, let me count the ways… Or perhaps not, life is too short. Not to mention nasty and brutish. And slang being, as I may have noted, an equal-opportunity employer does not discriminate between public violence and that which is perpetrated behind the domestic front door. So let us focus on sanctioned slogging. The prize-ring. The ‘Sweet Science’ as the writer A.J. Liebling called it. The Manly Art.

The term prize-fighter dates back to the 17th century when it seems to have been used only historically, and with reference to gladiators. It takes on a modern use with the rise, around 1800, of the Fancy, described by Robert Southey as ‘the Amateurs of Boxing’. The Fancy comprised the boxers (fancy coves) themselves, plus the fans (fancy blokes): sporting gents of one degree of respectability or another, bookmakers of equal variety, plus anyone who was up for the trek to some distant field where beadles and bailiffs – empowered to halt such illegal festivities – feared to tread. The fights went on for scores of rounds. The Queen of Marksbury, as various fistic practitioners have malapropised him, had yet to rule. And like any self-respecting coterie, there was a language.

Slangwise these were fistiana’s glory days. Not till the 1930s which offered such Palookaville pleasures as the tanker, who takes a dive or goes in the water (a tank being a swimming pool), the umbrella, who ‘folds up’, and the tomato can, who is ‘easily crushed’ did the smackers, soccers and bruisers offer so many synonyms.

The big word was mill. Milling had already meant any form of beating or thrashing but now it meant prize-fighting – with bare knuckles – and a fight could be a milling-bout or a milling-match. Mill itself meant a fight. Thus ‘An Amateur’(actually the slang collector John Badcock), tells in Real Life in London (1821) how ‘There was a most excellent mill at Moulsey Hurst [a cricket ground near the Thames and later the Hurst Park racecourse] on Thursday last, between the Gas-light man, who appears to be a game chicken, and a prime hammerer — he can give and take with any man — and Oliver — Gas beat him hollow, it was all Lombard-street to a china orange.’ (There was an original Game Chicken – the bare-knuckle champion Henry ‘Hen’ Pierce who had died in 1809). The milling-cove or milling kiddy was a boxer, and the milling-panney (from panny, a house) the place where the fight took place. There was a seeming variation: milvader, to box and thus milvadering, the fight. But there was no link: it came from Scottish milvad: a blow.

The boxers (buffers) seemed to be built on different lines. Nothing as simple as a head: there was the nob, the attic, the knowledge box, the top-loft, the brain canister and upper crust (fifty years before it began referring to a somewhat different variety of nob). Eyes were ogles, peepers, daylights and day-openers; teeth were ivories, domino boxes and grinders; the stomach, that alluring target, was a bread-bag, bread-basket or bread-room, a tripe-shop or a victualling office; the nose a smeller or sensitive plant; the ribs were palings. The fist, one’s most vital appendage, was the mitten, the hard dumpling, the famble, the daddle or the prop. The props were the arms. It was also the auctioneer: it ‘knocked things down’.

Knocking down was of course the point. One used nothing so prosaic as a jab, hook or uppercut. Blows could be nobbers or headachers (to the head), mufflers (to the mouth), facers (to the face), props (uppercuts) and chippers (jabs). A simple blow was a fib, which gave fibbing gloak, the boxer (gloak being a variant on bloke) and fibbing, the ‘noble art’ itself. As explained by the great boxing journalist Pierce Egan in his Book of Sports (1832): to fib was ‘technical, in the P[rize].Ring], to hammer your opponent repeatedly in close quarters; and to get no return for the compliment you are bestowing on him.’ It could also be pepper, and the boxer was a pepperer. There were staggerers and tellers (which ‘told’ on one’s stamina) and the gaslighter which presumably put out one’s lights. The knockout punch was a burster, a clicker (which also meant the fighter), a doser, a finisher, a full stop, a settler, a stopper and a sender (which sent one to the grass).

Alongside all of this was blood. Or claret. Of all the Fancy’s favourite terms this is perhaps the sole survivor. One could claret one’s opponent or tap their claret, i.e. draw their blood; and the first such blow was the claret-christening; the nose was the claret-jug, claret-cask or claret-spout.

For a while this was a popular tongue. In 1819 the poet Tom Moore, writing as ‘One of the Fancy’, composed the poem Tom Crib’s Memorial to Congress. He satirised the recent Congress of Aix-la-Chapelle, held by the four powers of Britain, Russia, Austria and Prussia to deal with post-Napoleonic France, as ‘The Grand Set-to between Long Sandy and Georgy the Porpus’. Among its slang-filled verses were such as this:

Neat milling this Round – what with clouts on the nob,
Home hits in the bread-basket, clicks in the gob,
And plumps in the daylights, a prettier treat
Between two Johnny Raws ’tis not easy to meet.

Modern boxing is more likely to provide imagery than slang: out for the count, beat someone to the punch, saved by the bell, or chuck, throw or toss in the sponge or towel, itself already in use in the mid-19th century. The last great exponent of language in the world of boxing was Muhammad Ali, but his delivery was all his own work. Let one former British champ, who came to grief against Ali among others, speak for modernity. As he explained c.1970: ‘I’m only a prawn in the game’.

Next week (and for six more after that): Jonathon marks the beginning of Lent by looking at the Seven Deadly Sins of Slang…

16 thoughts on “Green’s Dictionary of Slang: The Noble Art of Milling”