Congratulations to Steve Buckley, Jonathon Law, Mahlerman and Adelephant, who all twigged the answer pretty early on, I suspect. Click continue for the full answer… 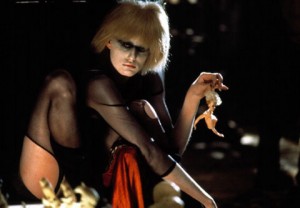 Earlier we posed the 8th fiendish Round Blogworld quiz question:

What connects the second of January last year in America with: a Haydn symphony, an android who became a mermaid, an F1 vehicle, a Cambodian Prime Minister, and, reportedly, a Corsican’s lament?

And the answer is… palindromes! All of the component answers can be read the same way either forwards or backwards.

The second of January last year is a palindromic date if you use the American style of presentation: 01 02 2010 (obviously it would be the first of February in the British style).

Joseph Haydn’s Symphony No. 47 in G major is also known as ‘The Palindrome’ because in the third movement (Minuetto e Trio), the second part of the Minuet is the same as the first, only played backwards. It is transcribed thus:

The replicant who became a mermaid is Daryl Hannah (top), whose surname is palindromic. She played the deadly replicant Pris in Blade Runner, and also starred as a mermaid in the 1984 Tom Hanks vehicle Splash.

The F1 vehicle is simply a race car. Sorry about that one.

Finally, the Corsican is Napoleon, who is alleged, for the purposes of contrived wordplay, to have uttered the palindrome “Able was I, ere I saw Elba“, in reference to his 300 day exile on the Mediterranean island after his forced abdication in 1814.

Do you have a fiendish quiz question of your own, in the ‘link this to that’ RBQ style? Send it to brit@thedabbler.co.uk. We’ll help with phrasing etc as required.