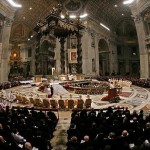 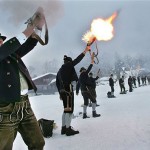 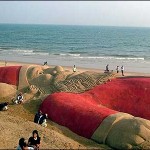 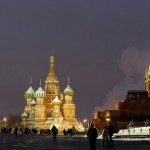 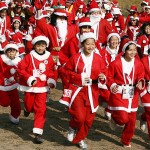 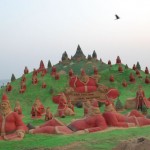 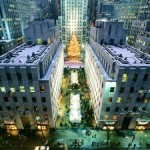 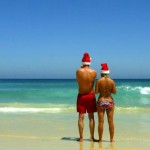 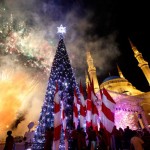 Hey Skipper (of The Daily Duck) – ‘an anchor for the year’

I can only get to what Christmas means to me by going through what it has meant: Stuff and Santa. Stuff and God. Stuff without God. Nothing. Much more than it ever did.

People, especially their shorter selves, love stuff. Santa was the omniscient eye, judge and provider. Clearly better to be nice than naughty, particularly as December’s progress increasingly focused the mind.

Then, as childhood itself edged into history, God replaced Santa, and the planning horizon got rather longer. The rewards for good behavior included the eternal, as well as the material.

I was brought up as a fully participating Episcopalian — choir boy until my voice plummeted, then acolyte. While not a cause, it was certainly no bulwark against first doubt, then the kind of emphatic dismissal common to headstrong teenagers. Still loved getting stuff, though. Even now I can clearly picture a glittering new racing bike resting next to the tree.

Once fledged, I spent nearly 15 peripatetic years as a fighter pilot. Alone and Godless meant there was a long string of no Seasons for which no reasons were needed. With each year’s swan song, the alert shack was full of single guys, around whom there was a faint aura of pathos, getting brighter with age, invisible only to us.

Having finally aged beyond the point where continued bachlerdom is a signifier to the world of some profound personal deficiency, I got my own chance to re-prove the readily apparent: without men, there are no airplanes; without women, no civilization.

With a family, Christmas provides an anchor for the year. Each one is a reward where stuff, now a material way of saying “thank you” for taking my life far beyond an empty exercise, is much more fun to give than get.

Christians often argue that, aside from the objective truth of Christianity, it has subjective validity. Accordingly, Western Civilization is built upon its bedrock. Perhaps. Probably, even.

I still travel a lot. No matter where I have been when Christmas rolls around, the season’s signs abound. Whether it is an immense tree in a Korean hotel, carols played in Chinese shops, or decorations enlivening an otherwise bleak Kazakhstan, Christmas has transcended the religion of its birth. Marrying the joys of getting and giving seems to have hit a universal human chord.

So, Christians, thank you for letting the rest of us use your holy day.

I spent Christmas 1988 in Warsaw. It was very cold and very grey. The communist system was creaking but its leaders were still defiant, the secret police ubiquitous and the Solidarity trade union still banned.

On Christmas Eve we went to midnight mass at St. Stanislaus church. It was the church of Jerzy Popieluszko – a popular, charismatic priest whose relentless criticism of the government led to his state sponsored murder four years earlier. His killing sparked outrage and his church became off limits to the state security apparatus. This became clear as soon as you stepped through the gates. The railings were adorned with outlawed Solidarity banners and pictures of Lech Walesa and Popieluszko, all lit up by a sea of flickering lanterns. The police just looked on from across the street. Inside, the church was packed. Being neither Catholic nor a Polish speaker I had no idea what was going on. I just remember lots of chanting, incense and neighbour hugging.

But the service was not so much about a celebration of Christmas, more a giant yuletide poke in the eye for a squalid, repressive and dying regime. For the many hundreds of people there it was an act of defiance and a call for freedom. I am glad I was able to join them.

This town where I live in Romania has a great tradition at this time of year: a celebration for all couples who’ve recently managed to survive 50 years of married life together. They even give them a floral bouquet and 100 quid for their efforts. My parents-in-law certainly always haven’t seen eye to eye, but there were tears in mum’s eyes, and have a look at dad as he breaks the mayor’s hand in his famous vice-like grip (developed during 50 years of screwing the town’s taps on), then tells him to buzz off, then holds up the diploma like a world heavyweight champion! Arty hand-held camerawork by Mrs Dilo, in accordance with Dogma 95 rules…

ZMKC – ‘What is Christmas for?’

“Mummy, mummy, what is Christmas for,” my children asked me, many years ago. “Is it for celebrating the mango harvest?” one asked, “or is it for eating?” “Is it for going to school and being given a piece of red cardboard,” demanded another, “and then spreading Clag on it and sticking bits of cotton wool about and sprinkling silver glitter through your hair?”

As they looked up at me eagerly, their eyes shining with innocent goodness (yes, I did say “many years ago”), my thoughts, to my surprise, turned to the distant past. I remembered the man I worked with whose incompetence was only equalled by the quality of his suits. Every single one of them was terrible, but the stand-outs – and his favourites – were the ones he’d brought back from a business trip to the Soviet Union in 1979. All I can say is that, beside him in one of those, Leonid Brezhnev would have looked like George Clooney (it was partly the curiously industrial-looking zippers on the flies).

The reason I thought of him at that moment was that I used to ask the very same question about my colleague that I was now being asked about Christmas. “What is he for?” I used to say, as his latest task turned into disaster, “what in heaven’s name can he possibly for?’

And then, after lunch one day, the answer came to me, when my colleague returned from his break bearing a carrier bag. From it, he produced a dazzling suit made of something that looked very like Crimplene (although I’m sure by then they’d stopped making that curious substance) and covered in broad lime green and beige alternating stripes.

“So that’s it,” I thought, “that’s his main reason for being – to take care of gents’ outfitters across the world. He’s here for one purpose – to soak up the errors made by their buyers; he’s the man whose arrival makes men’s clothing store assistants literally jump for joy. “Quick, Rod,” they say, when they glimpse him through the window, “go out the back and get that terrible suit.” “Which one, Sir – not the one with the yellow fleck and the marmalade lining – that thing you bought after your seventh vodka last time the rep from Selvitex came round?” “Yes, and that red one, with the thin mauve stripe.” “But, Sir, that’s been there for seventeen years.” “Never mind, lad, just do as you’re told.” (These are all true descriptions of genuine garments worn by my erstwhile colleague.)

Anyway, thanks to that recollection I had an answer for my children. What my colleague was to gents’ outfitters, Christmas was to tat manufacturers: it was a time for absorbing all the manufacturers’ really awful rubbish, for soaking up the useless household items, joke presents and sundry nonsense that are churned out constantly, right across the globe.

And when I’d explained this, most of my children gasped in wonder. “Like the tea-cosy with the light-up Rudolf nose Aunt Penny gave you?’ one of them cried, her face bright with sudden understanding. “Exactly,” I said, wondering what new horrors this year’s festivities would reveal. Concealed in brightly coloured paper, what frightful objects would be handed to me? I remembered past offerings – psychedelic ‘witches’ breeches’, a talking Shane Warne stubby holder, passion testers, (large and small), paisley purple stockings, novelty slippers, a card that played Christmas carols on a continuous loop and on Boxing Day 1997 disappeared from view but not from earshot, its melodies becoming a faint but incessant accompaniment to our lives until we eventually moved. Could this year have anything worse in store?

These dismal speculations were soon interrupted by my youngest. She tugged at my sleeve and then began to speak. “I thought Christmas was for the birth of Baby Jesus”,she said, rather forlornly. ‘Isn’t that what Christmas is really for?” “That’s what Christmas is about,’ I explained to her carefully. “Sadly, though, it’s no longer what Christmas is for.”