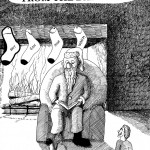 It is always Christmas inside my head. More accurately, I could say that Christmas recurs, on an almost daily basis, through all the seasons of the year. This is not a pleasant state of affairs, for the reason is the presence of a niggling and inexplicably persistent earworm – one of those songs, or snatches of songs, that get stuck in one’s head and will not go away.

O how I suffer! For, readers, I have to tell you that for some years now, the music lodged in my head, more often than not, is Happy Christmas (War Is Over), by the man amusingly described in a letter by Kenneth Williams as “that Beatle who married an Asiatic woman”.

John Lennon – not Ringo Starr, as Williams mistakenly identified him in the letter – certainly had a knack for vapid doggerel, but Happy Christmas is particularly irritating. So this is Christmas, and what have you done? I think the correct answer to this hectoring question is “I have been working tirelessly for world peace, in between funding the IRA and purchasing the apartment next door for fur coat storage space”. Another year over, and a new one just begun. Well, no, John, New Year’s Day is a week later.

I will not proceed through the rest of this mawkish twaddle, and in truth there are times when I manage to banish the earworm after that opening couplet. But at other times it continues, and I have to say there is a certain sense of relief when Yoko and the caterwauling children’s choir strike up the tune. You have to love Yoko, don’t you?

There are occasional days when I am blessed with other songs inside my head, but not many. Happy Christmas (War Is Over) has blighted my brain for two or three years now, and, like Edward Gorey’s doubtful guest, it shows no intention of going away. 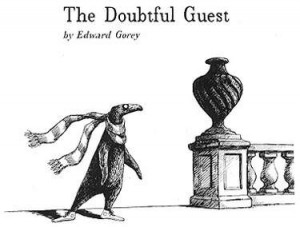 Ask any hard-nosed anthropologist and she will tell you that there is no such thing as a free gift. Gifts are part of a system of exchange: give someone a present and you expect to get something back. This process of exchange reaches a crescendo at Christmas, and every year I observe it with amusement and a certain amount of affectionate exasperation.

The Resident Wise Woman, with whom I am fortunate to share my life, comes from a background in which equity, fairness, and consideration are valued highly. Every year, in the run-up to Christmas, the female members of her family engage in an elaborate ritual of discreet questioning, obsessive list-making, and careful valuation of potential presents. Don’t give X a present that’s worth too much, because she’ll feel uncomfortable that she’s only given us the low-value present she can afford. Y is always so generous: we must not palm him off with a pair of socks or a packet of handkerchiefs. And so on.

All this is charming, and, on one level, I’m not complaining. I get showered with books, sweaters, and other nice things, most of which I actually want, and my nieces and in-laws seem genuinely pleased with what they receive from me. But it leaves me with a problem, and it’s nothing to do with the Resident Wise Woman and her lovely family. It’s this. I have quite a few friends who I want to remember at Christmas but for whom the rather tired ritual of the Christmas card isn’t quite enough. I want to give them something, but I don’t want them to feel obliged to give something in return. And many of them are too far flung to take out for a drink.

So here’s what I do. These friends know that my house is full of books. (Whenever strangers come in they say, ‘What a lot of books! Have you read them all?’) I have a habit, annoying or endearing according to taste, of grabbing a book from the all-encompassing shelves and reading a bit out to illustrate a point in a conversation. The ritual I’ve developed over the last few years is to reproduce this habit for my friends by collecting together some favourite extracts and putting them together in small booklet. There have been six, so far.

My private name for these booklets is Christmascellanies, although they’re not really miscellaneous since they usually have a theme – churches, cats, houses, libraries. But they’re miscellaneous in one way, in that I always try and include a mix of writing styles – something funny, something serious, some poetry, some prose – in the hope that each recipient will find something in there that they like. So Christmascellanies they remain, although there’s no name for this genre. The only person I know of who does something similar is John Julius Norwich, who calls his offerings Christmas Crackers. But I’d not dare to appropriate his term for my small offerings.

I’ve sent the booklets out again as usual, with the understanding that I’ll get nothing in return. This year’s theme is eating, with luncheon included. So they’re free gifts about free lunches, neither of which are supposed to exist. Anthropology? Bah, humbug!

Christmas in our household was usually the same, regardless of location or additional company. We attended church with our mother on Christmas eve, then returned home, opened one present and stayed up far too late, overcome with excitement. The following morning, I’d run into my brother’s room with my stocking, climb onto his bed and we’d open our stockings together. All perfectly normal. As was the family breakfast, opening the presents (accompanied by beverages of varying strengths depending on our ages at the time), Christmas lunch cooked to perfection by Mum, and finally slumping heavily, tipsy and queasy into an armchair to gloat over our Christmas cache and listen to new records/CDs.

Then, after the inevitable slumber, came the game of Trivial Pursuits. I cannot remember a time that our family has not formed two teams, at all family occasions, and pitted our wits against each other. My brother and mother versus Dad and me. Skill, brains and co-operation versus luck, blustering assertion and disorder. (And, to be fair to Dad, some strange wealth of trivia lodged deep in his memory, though often just out of reach.) Inevitably the other team won, gracefully, almost every time. But should the die favour us after the fifth defeat (“we was robbed!”) and cry of “I challenge you AGAIN”, and chance should have it that Dad and I actually won, we would shout “WHO’S THE CHAMPION?” mercilessly, shamelessly while mother and brother watched with pitying expressions. They conceded defeat, grateful that we were not demanding another re-match, and we all trotted off to our beds to sleep off the Christmas booze.

This year I shall be having Christmas with my own children, who are far too young to play trivial pursuits. My eldest (two and three quarters) is currently in training though, and I shall have her on my team in a few years. If she’s any good.

Stan Madeley (‘Second Class Male’) – A time for being thankful….

Christmas is a time for friends and family, even Uncle Harold and his sprouts, cousin Norma and her infection, and, especially, the neighbour’s grandchildren already blistered on Santa’s hot toddy by four AM on Christmas Day morning and singing to Lips on their new Xbox 360.

Christmas it a time of goodwill and the goodwill you show the choir singers who try to tap you up for a shilling on a dark night when your security camera is on the blink but you still give them chance to get through the front gate before your wife releases The Hound.

Christmas is a time of understanding, unless you try watching the Polish existential film that Channel 4 decided to show at three o’clock on Boxing Day afternoon. So why does a whiskered man in a porkpie hat keep pointing to the moon and saying ‘zapalenie’?

Christmas is a time of gifts, particularly the gifts of patience, tolerance, and knowing when it’s dark enough to let down your neighbour’s tyres because of what he said about your wife back in October.

Christmas is about fun, particularly if it’s repeated fun on BBC2 that you originally watched on BBC3 in the summer. Otherwise, it’s about Noel Edmonds and there’s nothing fun about watching sick people opening presents.

Christmas is about the Queen, God bless her, and her seasonal message of rehashed news reports, footage of hospices, places she opened, challenges we overcame, things we were happy to have already forgotten and really didn’t need reminding about.

Christmas is a time of giving, especially giving the boot to the morbidly obese chancer dislodging your shingle and causing structural damage by trying to fit his XXXL down your central heating vent.

Above all, Christmas is about being thankful. Thankful that you’ve got through the bloody thing but wondering how you’ll pay for it in January.