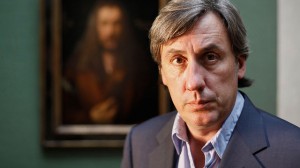 Recently launched was Andrew hyphen Dixon’s new series on German art, many of the usual suspects of the period were included, many not. As an educator he is less likely to induce snoozing than Simon Schama who possibly uses his audience as a psychiatrist’s couch. However, about forty minutes into Andrew’s stuff and the art tends to get lost under his cracker barrel although it must be said that both are excellent entertainers. The conclusion of the first programme seemed to be that German art is the way it was, ghastly ghoulies etc, because the yokels were a bunch of nail chewing, insomniac, dreach forest dwellers.

Pardon me for growing nose hairs but weren’t most of the known world’s dwellers living under the first two and all of the northern mob living under the all three of those conditions and that being so why wasn’t all art like that, full of bad creatures.

We were given a whistle stop tour of the Dom and I will give him the benefit of doubt and assume that as the programme is chronological he will revisit and kneel before the Richter window, if not in the book his name goes and through it a line will be struck.

Stefan Lochner seems not to have had a mention or if he has, I may have been blinking. 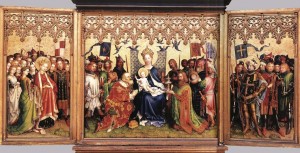 This (above) is the Lochner triptych The Alterpiece of the Patron Saints of  Köln, it depicts the giving of gifts during the visit of the three kings, it is unique in that it shows the infant Jesus high fiving and is one of the most important Alte Werke paintings in the Cathedral, it dominates the Lady Chapel’s alter, close to the Dom’s raison d’être, the Shrine of the Magi, the chapel is in regular use. Painted for the city’s Rathaus chapel around 1442 it came into the possession of the Dom in 1810 at the instigation of Ferdinand Franz Wallraf, canon, founder of the Wallraf-Richartz Museum and all round good egg. The triptych was hidden during the French occupation in the seventeen nineties. I would say that many of the onlookers depicted were Rathaus poo-bahs as the council’s chapel footed the bill. Incidentally, the occupation was the reason for the naming of Eau de Cologne’s 4711, because of the Frenchie’s street numbering system, forced upon  the city during the occupation.  The companies address was and still is, Glockengasse No. 4711.

Another of Stefan Lochners great works is the Mutter Gottes in der Rosenlaube. The Madonna of the Rosebush and is often described as Köln‘s Mona Lisa, how unkind. 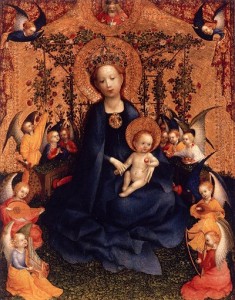 The picture bathes the viewer in rose scented warmth, all is well in this golden bower, contented faces, young musicians relaxed, it’s the happy hour. The painting hangs in the Wallraf, its subject went on to hang about on a cross, moaning about Easter.

Hard information about Lochner is scarce, he was born on the shores of Lake Constance, the move to the Schildergasse in Köln would have been home from home, weather-wise, cold winters all round. He flourished in the city and bought, or borrowed and acquired a large double fronted house in the artists street. Both he and his wife perished in the great plague of 1451-1452, a great loss. His house was eventually bought by Barthel Bruyn.  No less a personage than Durer, when visiting  Köln made a beeline for Stefan’s pix, paying the princely sum of three silver pennies for a peek, endorsement indeed.

The Triptych and Madonna are his most well known work, the light beneath his bushel is The Last Judgement, painted in1435. As we know the subject suffers from over exposure, done to death really, being Rome’s default scare the knickers off  ’em wheeze. Whilst visiting the Wallraf over the years this painting and the Delaroche Herodius have turned me into a schizophrenic, which is best? Stefan, Paul, Paul, Stefan, must go to the brauhaus and decide. 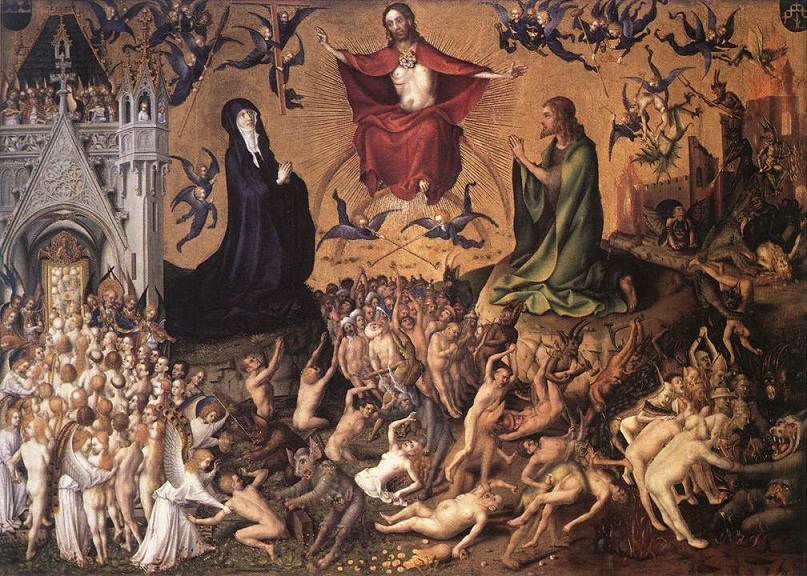 The painting requires extensive use of the inspectorial optic and is deeply rewarding, picture stories all over it. What is that randy little ginger angel doing chatting up the naked ginger burd and where one asks is his left hand. “Come with me my dear and your time in purgatory will be short, did you bring any dunkies btw?” Truly a picture to absorb and enjoy.

Hauling ourselves up the stairs of the Wallraf we reach the floor dedicated to the God stuff, acres of it, at this point Dawkins might expire. Wander through to the Ursula legend room. Ursula (little lady bear) may or may not have existed, no matter it’s a cracking yarn. Romano Brit, on the way to shack up with a posh bloke, gets lost at sea, decides to visit Rome, on the way home, visits Köln, tough toenails, the Hun are about, looking for virgins, who isn’t. Huns being what Huns are, off with their heads, including our Ursula’s. Birth of a legend. Lovely views of Köln. During the thirteenth century during excavations for new city walls, the bones of many thousands of women were found so…..

The ‘Masters of the Legend of St Ursula’, active about 1455-1460. There are fifteen paintings in this series, needing a day or two simply to have a rough idea.

One of the basic lessons of business is that, unless you are in a marketplace where that is the norm, never under any circumstances have the bulk of your order book with one customer, have many customers, if you upset one, tell them to go get stuffed. This is why so many useless service industry companies treat their customers like dirt and get away with it, hundreds possibly thousands of customers, who cares about losing the odd dozen .

Before art was called art its participants were simply on the same list as stonemasons and carpenters, they were the suppliers of paintings. In the period covered above the artists workshops in the Schildergasse were painting factories, most of the artists unknown, they never signed their work hence The Master of. They all had a single customer, the Roman message. Dictating content and prices, the quality taken for granted and mostly stunning.

They were the forerunners of the British dairy farmers.

5 thoughts on “Stefan, Ursula, the Schildergasse SMEs and the Tesco problem”