Well done to Worm and Adelephant for getting it, even the bonus questions.

For anyone who’s given up, click continue for the full answers…. 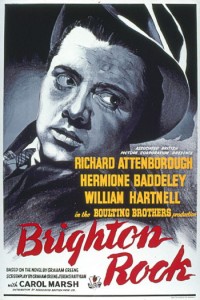 Earlier we posed the fourth Round Blogworld Quiz question, namely:

What links a British seaside town with a small digit, an operatic Princess, a flower, a London builder and a San Francisco poet?

And the answer is…Brighton Rock! Brighton is obviously the seaside town; all the other clues are characters in the Graham Greene novel.

The small digit (as in little finger) is Pinkie, the novel’s anti-hero, memorably played by Dickie Attenborough in the 1947 film adaptation.

The flower is a rose – Rose being the hapless waitress Pinkie marries.

Now the really tricky ones. The answers are Cubitt and Spicer, both members of Pinkie’s gang.

Thomas Cubitt was a master builder in the early 19th century, responsible for much of the look of London. His work includes the east front of Buckingham Palace and great chunks of Belgravia, Pimlico and Bloombury. There’s a statue of him on Denbigh Street.

Jack Spicer is the American poet. Part of the San Francisco Beat generation, his stock has risen to the point where he actually won last year’s American Book Award for Poetry – not bad for someone who died from alcoholism in 1965.

1) the London builder and the San Francisco poet are two. Another is an area of Luton.

Cubitt and Spicer were two members of Pinkie’s gang, the other was Dallow, which is also the name of a district of Luton.

2) How is Morrissey related to the above?

Morrissey sings the line “Dallow, Spicer, Pinkie, Cubitt… rush to danger, wind up nowhere” in the song Now My Heart is Full, from his 1994 LP Vauxhall and I (which is, I venture to say, his best solo album).

3) How is a poetically-named DI from an earlier Nige Dabbler RB quiz related to the overall answer?

Nige’s poetically-named DI was Jane Tennyson, played of course by Helen Mirren. Mirren is set to star as Ida Arnold in a new film adaptation of Brighton Rock.

2 thoughts on “Round Blogworld Quiz #4: The Solution”