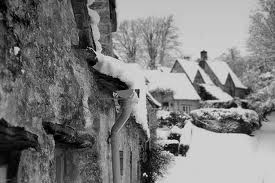 A Cotswold Village is one of my favourite books, mostly for sentimental reasons – I grew up in the Cotswolds – but also because it’s a wonderful historical document that anyone interested in country life should enjoy. Written at the close of the 19th century, its author, J. Arthur Gibbs, was an Oxford-educated scion of a banking dynasty who abandoned the counting houses of the City to become a country squire. His death, at the horribly early age of thirty-one, gives the book, which is full of life but has its wistful moments, an elegiac feel.

He brings an observant eye to village and country life, describing the people he lived amongst and the nature he enjoyed carefully and thoughtfully. The language is sometimes a bit lush and flowery for our taste and sometimes the prejudices of his class and background get the better of him (but probably rather less than for most of us) but it nevertheless remains a highly sympathetic account.

Like any countryman he was acutely aware of the seasons and the changes they wrought to man and beast, including at mid-winter and Christmas. One notable feature of the winter holiday was the annual performance by the local ‘mummer troop’ of a rather strange traditional playlet. It sounds very ancient, and I wouldn’t doubt its origins were medieval: ‘the dramatis personae are five in number — viz., Father Christmas, Saint George, a Turkish Knight, the Doctor, and an Old Woman.’

Gibbs persuaded the head of the ‘mummer troop to write out their play as it was handed down to him by his predecessors. This he did in a fine bold hand on four sides of foolscap’. In Gibbs’s view – and to our loss – ‘the literary quality of the lines [was] so poor that they are hardly worth reproducing, except as a specimen of the poetry of very early times handed down by oral tradition. Suffice it to say that all are dressed in paper flimsies of various shapes and colours.’

He does however reproduce a few snatches. It sounds a raucously entertaining piece. Here’s the entry of the ‘Old Woman’ who I suspect is played by a man in drag:

“In comes I old Betsy Bub;
On my shoulder I carry my tub,
And in my hand a dripping-pan.
Don’t you think I’m a jolly old man?

Now last Christmas my father killed a fat hog,
And my mother made black-puddings enough to choke a dog,
And they hung them up with a pudden string
Till the fat dropped out and the maggots crawled in,” etc.

He summarises: ‘The mummers’ play, of which the above is a very brief resume, lasts about half an hour, and includes many songs of a topical nature’. Sounds as if we’ve encountered the origins of panto…

(For those interested in learning more about present-day mumming, this post is on recent practice in Deptford; it also provided a link to this further information on the topic).

8 thoughts on “A Cotswold Village at Christmas I”