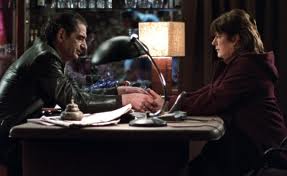 I wasted about 100 minutes of my sleeping time the other night to watch an execrable film called Irina Palm.  It starred Marianne Faithfull and I enjoy her singing, but her idea of acting is to be catatonic with slow, vague reactions.  The screen play was dire – the story of a grandmother living a respectable life in an English village who goes and works in a Soho sex shop to earn money so her dying grandson can be taken to Melbourne for life-saving treatment.   Under the name of Irina Palm she becomes a success at wanking blokes through a hole in the wall.  The tough foreign sex club owner falls for her, but her son discovers what she’s been up to, as do her posh village friends and there are a few highly stagy explosions – “Don‘t call me a whore“.  All the acting was dreadful, the dialogue unbelievably bad – “You look nice when you smile” – the characters of the posh ladies in the village and the gossips in the village shop sub-sub-Archers stereotypes and the sex jokes  laboured eg the condition called “penis elbow“ which assembly line wanking can bring on.   It was evidently meant to be a dark comedy, but it wasn’t dark, nor funny.  I thought this must be some odd B movie Faithfull had made by mistake but looking it up on Wikipedia I find it has won nominations for awards.

I suppose it was the glum grey European look and off-beat sex that shout “art house movie”  that got it the Berlin nomination.  I was watching it in staggered astonishment that a film could be that bad and still get released.