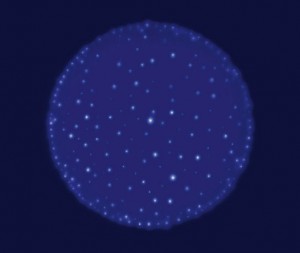 How do you make photos without a camera? Well, at the heart of Shadow Catchers – the V&A’s beautifully-presented show of camera-less photography – is a video in which the five featured artists explain how.

They variously call their works ‘photograms’, ‘luminograms’ and ‘chemigrams’, but essentially the idea is to create images on photographic paper, either through casting shadows, capturing light or chemically treating the paper’s surface.

The very existence of this video implicitly illustrates the principal handicap faced by this exhibition: that any art form needing to explain its processes and techniques in order justify its existence and enable you to appreciate its works is problematic. Do we look at these as not-quite-paintings or as not-quite-photographs?

In fairness, the video also addresses the problem explicitly, when the ‘chemigrammist’ Pierre Cordier* says:

I put some distance between myself and the notion of photography, hoping to be welcomed within the world of painting, because in fact I am neither a painter nor a photographer, but a bit of both. But the painting world couldn’t care less about this photographer, Cordier.

To use a good witticism, which Monsieur Degas said of Nadar, ‘Oh you’re just a faux-artiste, a faux-painter, a faux-tograph!’

So what do these works do that painting can’t do with more beauty and personality, or that a camera can’t do with more veracity and impact? My answer, based on the exhibits, is: ‘mostly, not much’. The majority of the works are a bit ‘so-what?’ and diminished by the pretentious explanatory captions. Gazing at Garry Fabian Miller’s The Night Cell (top) I found myself thinking more of an intriguing blogpost sent to me by  illustrator (and Dabbler reader) Richard Chadwick, in which he ponders the problems of displaying glazed paintings. The looming reflections of the gallery-goers in the glass were more interesting than the picture itself. 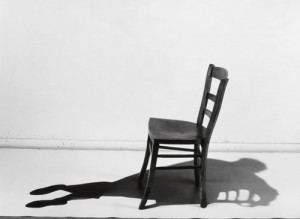 There are two striking works. Floris Neusüss’ Be Right Back (above) consists of a real chair on top of a shadow of a now-absent sitter. It is one of those instant-impact installation pieces of the sort that Saatchi usually snaps up. Cleverly titled, too – the subject hasn’t ‘been right back’ for a quarter of a century now, so we can’t help but think of abandonment, bereavement and whatnot. But like all instant-impact installation pieces (and unlike the subtler, layered pleasures of great paintings), once you’ve experienced the impact, that’s the end of that.

By far the best work on show is Fabian Miller’s Petworth Window 13 February 2000 (below). This is one artwork definitely enhanced by the photographic process –possessing an eerie, death’s-door luminosity which would be difficult to recreate in paint. Aliens, dreams, lights at the end of life’s tunnel will probably all come to mind. 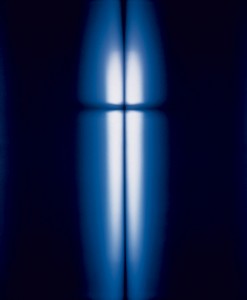 Otherwise, is the faux-tography worth the visit? Depends how much you value a fiver, really. The V&A itself is always worth a trip, of course: the café is a marvel; the shop is a terrific place to buy Christmas pressies for women; and, being a place of inbetweeny things that fit neither into a conventional museum nor a normal art gallery, the V&A would seem to be a perfect showcase for camera-less photography. The unfortunate thing for this show – and I suppose for most temporary exhibitions –  is that the Raphael cartoons, the countless sculptures and all the other age-old glories of the V&A permanent exhibits must inevitably put Shadow Catchers in the, ahem, shade.

*At first I took the video to contain a remarkable pair of rarities: a Frenchman who didn’t take himself too seriously, and an Australian who did. Alas the ‘Frenchman’ Cordier turned out to be Belgian, but the Aussie ‘daguerreotypist’ Adam Fuss managed to come out with one of the most unintentionally-amusing bits of artistic self-analysis I’ve heard for a while: “Bringing images, manifesting images, that bringing out and externalising has been therapeutic for me. Healing. You don’t create, you die. You know, you’re not creative, you die. It’s just about survival really.”

I am ashamed (by which, of course, I mean proud) to admit that I was unable to stifle a loud guffaw.

8 thoughts on “Faux-tography: Shadow Catchers at the V&A”