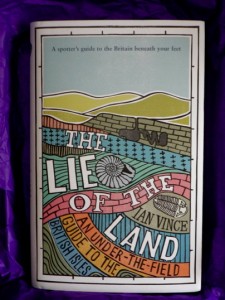 Ian Vince’s ‘The Lie of the Land‘ is a great new book that attempts to uncover and demystify some of the fascinating geology that lies beneath our feet here in the UK. Ian writes the regular Strange Days column in The Daily Telegraph, which focuses on curious and undiscovered aspects of Britain. Today he’s here to tell The Dabbler a bit about how he came to be interested in the murky world of Gneiss…

I developed an interest in geology as a geeky teen, when a general interest in the natural world and a specific one in birds looked for a while as though it might blossom into a career manipulating wetlands and wearing Arran sweaters in the teeth of Norfolk gales. I discovered geology as a kind of scientific distraction – an A level to make up the numbers – and suddenly the world opened up. Or, rather, the earth opened up and the mechanics of what made the landscape look the way it did became a lot clearer than it had before. For all of that worthy intent to understand the world on a deeper level, I still dropped out of college for reasons that seemed urgent at the time but, 27 years later, I cannot recall.

I forgot a lot of the geology as well. Except the impression that it was, in an abstract sense, an interesting thing to know about. Indeed, having dived in again I believe once more that geology is the wellspring of natural science because almost everything we know of on the planet evolved from the same origin – from the insides of the Earth. As such, it is actually a catholic mélange of the most interesting bits of all the other sciences; physics, chemistry and biology all play a part and contribute to our understanding of the Earth at its basic structural level. What is more important, however, is that it contributes to our understanding of the landscape we walk upon.

Geology books often seem to lose this connection with terra firma, slipping into abstract language full of specialised compound adjectives, so I saw it as my responsibility to filter all this abstracted knowledge through my incumbent ignorance so that someone with just a casual interest in the British countryside could understand it a little better. I also wanted to popularise the very idea of the British landscape and founded the British Landscape Club. If you just want to enjoy the view, you could always join our ranks for free (and get a rather fetching free badge).

Getting in touch with the landscape in a spirit of inquiry is immensely rewarding. One of the first trips I undertook to familiarise myself with Britain as a whole was to its oldest part – the far northwest of Scotland, where some of the geology is up to three billion years old. Here lies the Lewisian Gneiss, a rock that looks like granite from a distance but which reveals a banded appearance at close quarters, with alternating dark and light grey stripes. In places, the stripes twist and turn, squeezed this way and that under monumental force as if the rock once had the structural integrity of toothpaste.

Wherever the gneiss outcrops, it does so as open rolling lowland moors, for which the official geological adjective appears to be ‘hummocky’, punctuated by countless lochs and lochans with the odd mountain towering incongruously above. The hummocks are a product of both geology and ancient history. Glaciers grinding their way over the gneiss sought out every imperfection and weakness in it and by the time that the latest glaciation had reached its peak around 20,000 years ago, an ice wall up to 800 metres high had scoured the landscape making countless hollows of every size; hollows that are now occupied with lochs, lochans and Scottish puddles.

It is a singular landscape which was once, like all of Scotland, a part of the Canadian Shield until an ocean closed and another one opened in its place. It is now stranded on this side of the pond with the rest of Britain while the line that marks the suture line of where the whole of Britain is welded together lies almost exactly along the modern Anglo-Scottish border. Now united, Britain as a whole is one of the most geologically varied places on Earth, all of which underlines what a fascinating landscape we live in.

In support of his book, Ian has set up an organisation that celebrates the exotic delights of the UK’s countryside: The British Landscape Club. A slideshow of the book’s themes (including Gneiss) can be found at the Guardian website here.

To order the book on Amazon go here or to get signed copies direct from the author, click here.

6 thoughts on “The Lie Of The Land”