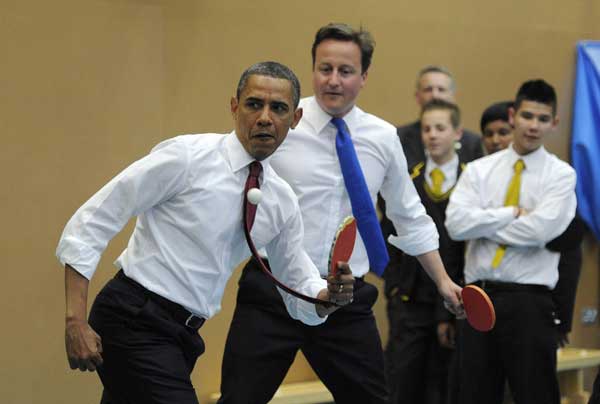 Can we read anything sinister into which hand a president writes with? The Wikiworm trawled Wikipedia to find out…

The first president to be described as left-handed was Herbert Hoover, though this has been disputed. There is no evidence of any left-handed president before Hoover, although it was said about President James Garfield that he could simultaneously write Latin with his right hand and Greek with his left. Gerald Ford described himself as “left-handed sitting down and right-handed standing up”. Being forced by his schoolteachers and parents to switch handedness was the case with Harry Truman, according to the biographer David McCullough.

In one interview, Ronald Reagan indicated that he had been born left-handed, but that school and parental pressure forced him to switch. Ronald Reagan is seen in photos playing sports and signing documents with his right hand but he holds a gun in his left hand and shoots a rifle left handed as seen in other photos.

As of 2014, three out of the last four presidents have been left-handed. Counting as far back as Truman, the number is five (or seven, if the two ambidextrous presidents are included) out of twelve. In the 1992 election, all three major candidates, George H. W. Bush, Bill Clinton and Ross Perot, were left-handed. The 1996 election also involved three left-handed candidates: Clinton, Perot, and Bob Dole, who learned to use his left hand after his right hand was paralyzed by a World War II injury. In the 2000 and 2004 elections, Bush, Gore, and Kerry were all right-handed. But, both major-party candidates in the 2008 presidential election, Barack Obama and John McCain, were left-handed. And in 2012, Obama beat right handed Mitt Romney.

The percentage of the population who are left-handed is about 10%. While some write off the pattern of presidential handedness as a coincidence, others have tried to come up with scientific explanations. According to Daniel Geschwind, a professor of human genetics at UCLA, in 2008: “Six out of the past 12 presidents is statistically significant and probably means something”.

Amar Klar, a scientist who has worked on handedness, says that left-handed people “have a wider scope of thinking”, and points to the disproportionately high number of Nobel Prize winners, writers, and painters who are left-handed. Michael Peters, a neuropsychologist at the University of Guelph, points out that left-handed people have to get by in a world adapted to right-handers, something which can give them extra mental resilience.

The pattern, however, is not replicated among the thirteen post-World-War-II prime ministers of Great Britain. Only two prime ministers after World War II, David Cameron and James Callaghan, have been left-handed.

6 thoughts on “The Handedness of Presidents of the United States”