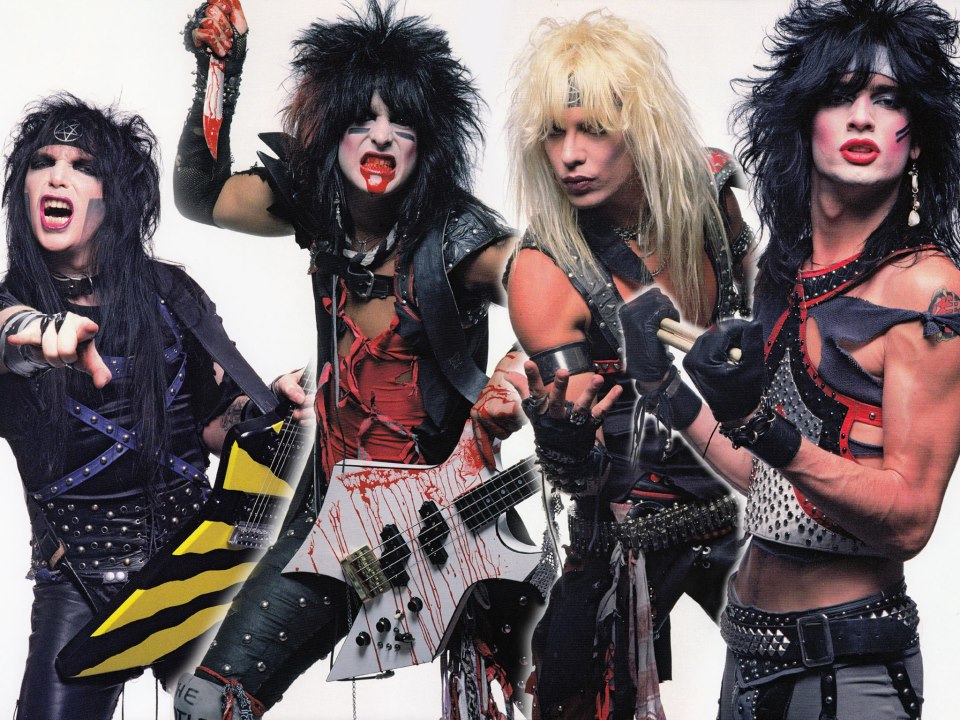 Brit reviews Jon Hotten’s new novel set in the debauched world of 1980s heavy metal – plus, you can win one of five signed copies…

Fashion, it is often said, is cyclical. Mods, beards, drainpipe trousers, home-brewed beer…they all go in and out and then come around again. Nile Rodgers, whose brand of disco was supposedly killed by punk, is the hippest producer around. Fleetwood Mac are headlining the Isle of Wight festival this year. Wait long enough, ride out the ridicule, and whatever you’re into will one day be cool once more. It seems true enough… And yet, try as I might, I just can’t quite bring myself to believe that LA ‘hair metal’, as played by the likes of Poison or Mötley Crüe [above], who bestrode the music world of the 1980s like poncey Titans, could ever now be seen as anything other than irredeemably naff.

Even the one brief successful revival of the genre, by The Darkness in the early 2000s, very soon itself went naff, and that’s despite being coated in thick protective layers of irony. But to trawl Youtube now for old MTV promos of Van Halen or Bon Jovi in their pomp – the copious hairspray, the make-up, the eye-wateringly tight leopard-print pants, the muscle tank tops, the sweatbands, the crotch-grabbing, the obligatory to-camera tonguey leers, the orgasmic yelps and squeals – is to stare aghast at what must surely be the most shameless generation of narcissistic assholes in the history of rock music. And that’s saying something.

So it is greatly to Jon Hotten’s credit that in My Life and the Beautiful Music, his new novel set in the world of hair metal excess, he doesn’t come merely to ridicule the era with shlock and cheap gags (as I’ve just done), but to sympathetically dissect both the milieu and the often sad, lost humans at the heart of it.

Dabbler readers who only know Hotten from his cricket writings may be surprised to learn that he spent his formative journalistic years as a staff writer for the heavy metal mag Kerrang!. And boy did he strike it lucky: landing his first job at a time when record companies had practically limitless PR budgets and would gladly fly pasty British hacks over to Los Angeles, put them up in top hotels and send them off to decadent aftershow parties where they could avail themselves of free drink and drugs and mingle with hot Californian girls who would in normal circumstances be way out of their league, all in return for a few stories in a niche music monthly.

My Life and the Beautiful Music is a fictionalised memoir (which I think essentially means that some of the names have been changed to protect the guilty) of what it was like to be just such a pasty British hack in a world of technicolor American excess. He stays in the hotels, he goes to the parties and he even manages to get with the hot Californian girl, yet he is always the outsider: the one with short hair who doesn’t inhale and sits on the beach with all his clothes on, but who can see the world for what it is. Yes, the decadence is often very funny (gloriously, at the first party he attends a horse dressed up to look like a unicorn gets loose in a hotel suite, causing utter mayhem), but never far from the surface is the desperate nihilism that comes from overdosing on everything. The key insight comes when Hotten watches the backstage behaviour of the band Poison:

I could see… that the band had passed from the years of saying no to the years of saying yes – there was no midpoint in this transition, no years of saying maybe or perhaps, just a border crossing at which all of the answers to their questions changed, when all of the club owners and booking agents and record companies and hotel clerks and car salesmen and shop assistants and liquor stores and drug dealers and girls who had always said no suddenly started saying yes. There was a further stage, rarer… where questions ceased to be posed; they were anticipated, granted before they ever arose, but CC was at that moment infatuated by ‘yes’. It would be, I guessed, a couple of years before ‘no’ became the only interesting answer, respite from getting everything that he wanted.

The late chapter Tour cleverly follows three metal bands each at a different one of these three stages of the rockstar lifecycle as they go on a dismal tour of midwest cities: the bottom-of-the-bill act striving to ‘make it’, playing to small uninterested audiences and facing endless petty humiliations; the main support act, a group of cheerful Germans loving the life; and the headliners, who always get whatever they want – girls, drugs, drink, gear – and are consequently a miserable bunch of jerks in a constant state of debauched ennui.

It’s a brilliantly orchestrated section. An even better one precedes it, in which Hotten tells the weird, dark story of Matthew Trippe [below], who claimed to have temporarily been in Mötley Crüe ‘playing’ the role of bassist Nikki Sixx while the ‘real’ one was injured, and then launched a legal action against the band when they supposedly dumped him. Trippe is almost certainly a fantasist, but there’s enough doubt for a story. 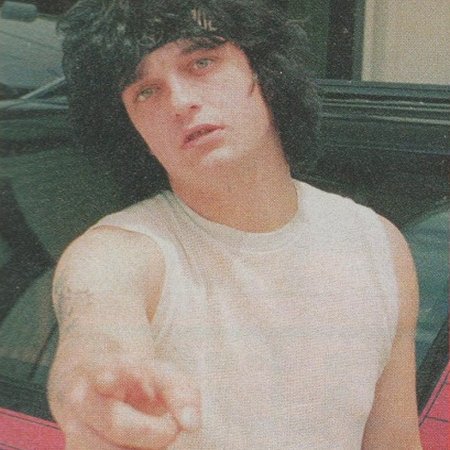 Hotten is a natural-born journalist and excels in telling such stories in controlled, compelling prose – as anyone who has read his superb non-fiction book The Years of the Locust can attest. That was about low-level pro boxing, a world much like the 80s metal music industry in which amoral, greedy shysters exploit the ambitions of people with a bit of talent and a strong desire to escape the humdrum. This is Hotten’s territory. He’s on the side of the ambitious maverick, the mould-breaker, the extravagant showman, the aspirant. Even his cricket writing (as The Old Batsman) is in the same vein: he’s a Kevin Pietersen supporter, and if the game of cricket has an equivalent of Mötley Crüe, then it surely must be KP. Hotten is fully aware of the absurdity of such types, but he is also sympathetic to the frailties, and the human stories. He’s critical, but never stoops to snarking.

As such, the 1980s hair metal scene of Los Angeles was the perfect place for the writer Jon Hotten to be: a golden time when young, hungry narcissists and record company starmakers with bottomless budgets could get together without any worries about taste or restraint and find out how just big the human ego could get. It’s all been a bit downhill since then for rock’n’roll schlock, with Mötley Crüe giving way to the anti-ego ‘authenticity’ of Nirvana, or even later the pious yoghurt-and-yoga schtick of Coldplay. Perhaps only hip hop stars still shamelessly live the life.

So could hair metal ever make a comeback from its pit of irredeemable naffness? It seemed inconceivable to me… and yet, what is that song I suddenly realise I’ve been hearing everywhere, the one they used for the very last scene of The Sopranos – redolent of hairspray and baking LA boulevards and unabashed emoting? Just a small town girl, livin’ in a lonely world, She took the midnight train, goin’ anywhere….

My Life and the Beautiful Music is published by Jonathan Cape and is available to buy here. 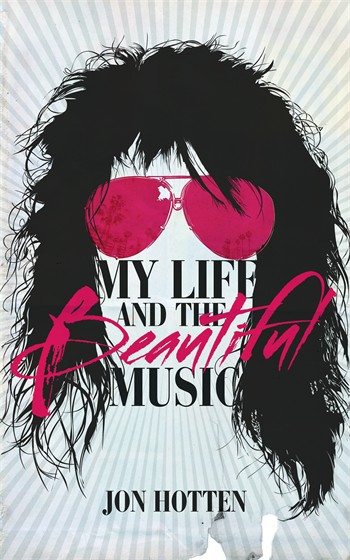 Win a signed copy of My Life and the Beautiful Music

Thanks to our friends at Jonathan Cape we have five signed copies of Jon Hotten’s book to give away to members of our Book Club.

To be in with a chance all you need to do is sign up below – it’s free and you’ll receive our monthly Book Club newsletter with competitions, reviews and the pick of The Dabbler blog. Five winners will be drawn at random from members of the Book Club. If you are already a member you do not have to do anything.

Competition closes at midnight on Friday 12 June. Five winners will be picked at random and contacted via email so please ensure you have included a working email address.

2 thoughts on “Review: My Life and the Beautiful Music by Jon Hotten”