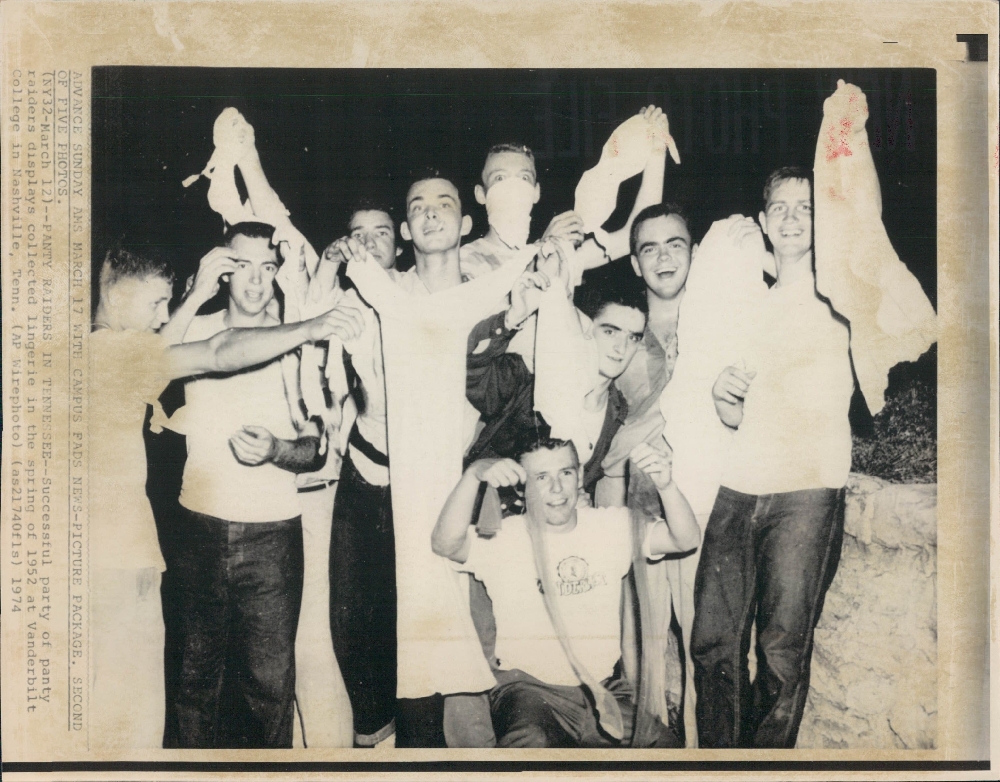 Dubious student shenanigans from a simpler time in this week’s Wikiworm, culled from the weirder recesses of Wikipedia.

A panty raid was an American 1950s college prank in which large groups of male students attempted to invade the living quarters of female students and steal their panties (undergarments) as the trophies of a successful raid. The term dates to February 1949.

Panty raids were the first college craze after World War II, following the 1930’s crazes of goldfish swallowing or seeing how many people could fit in a phone booth. The mock battles which ensued between male and female students echoed the riotous battles between freshmen and upperclassmen which were an annual ritual at many colleges in the 20th century.

The first documented incident occurred on February 25, 1949 at Augustana College, Rock Island, Illinois. Around 125 men entered the Woman’s Building ; the first party entered through heating tunnels beneath the building. Once inside, they unlocked the door for the remaining raiders to enter, locked the housemother in her apartment, and cut the light and phone lines. Although a few women reported missing undergarments, the goal was to cause commotion. The police arrived, and although no pranksters were charged, the news traveled, making headlines in the Chicago Tribune, Stars and Stripes, Time magazine, and the New York Times.

The next incident was on March 21, 1952, when University of Michigan students raided a dormitory, which sparked panty raids across the nation. Penn State’s first raid involved 2,000 males marching on the women’s dorms on April 8, 1952, cheered on by the women, who opened doors and windows and tossed out lingerie. By the end of 1952 spring term the “epidemic” had spread to 52 campuses.

At a number of colleges, panty raids functioned as a humorous, ad hoc protest against curfews and entry restrictions that barred male visitors from women’s dormitories. This was particularly the case at colleges that had recently started admitting women in large numbers for the first time after World War II, where female students on campus were an exotic novelty. At some colleges the large, leaderless crowds which gathered around panty raids were co-opted by student politicians into protest and activism against dorm curfews and parietals. These stirrings of student protest against restrictive campus rules fed the sudden emergence in the late 1950s of liberal activist parties in student government, such as SLATE at Berkeley.

Raiding continued, such as the raid by Princeton University men on Westminster Choir College in spring 1953. The University of Nebraska was credited with the first panty raid of 1955, when hundreds raided the women’s dorms, resulting in injuries and seven suspensions. The University of California, Berkeley had a 3,000-man panty raid in May 1956, which resulted in $10,000 damage. At the University of Michigan panty raids were associated with fall football pep rallies in addition to being a spring ritual in the 1950’s and early 1960’s.

The spring ritual continued into the 1960s. In 1961, three students were expelled from the University of Mississippi at Oxford,Mississippi, for panty raids.

By the 1970s, mixed dorms and less inhibited attitudes to sexual intercourse on campus led to the fading of panty raids. In 1969, the Governor Ronald W. Reagan of California, decried permissive attitudes to protesters on the Berkeley campus during the People’s Park riots, saying “How much further do we have to go to realize this is not just another panty raid?”