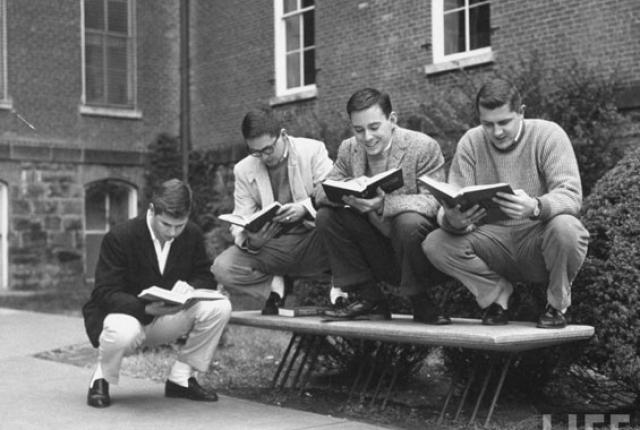 Surely the most feeble fad ever invented? All will be revealed in today’s weird Wikipedia article, presented by the Wikiworm.

Hunkerin’ (hunkering) is where a person sits in a squatting position. It briefly became an American fad in the late 1950s.

Hunkerin’ had been in use in many cultures, particularly in Asia, for centuries when it suddenly became a fad in the United States in 1959. Time reported that the craze started at the University of Arkansas when a shortage of chairs at a fraternity house led students to imitate their Ozark forefathers, who hunkered regularly.

While the word “hunkerin'” is believed to originate from the Scots word for “haunches”, claims were made for Yorkshire, Korea and Japan.

The fad spread first to Missouri, Mississippi and Oklahoma, then across the U.S. While males were the predominant hunkerers, it was reported that female hunkerers were welcomed. Within months, regional hunkerin’ competitions were being held to discover champion hunkerers.

Considered by authorities as preferable to the craze of the previous year, phonebooth stuffing, people hunkered for hours on car roofs, in phone booths and wherever people gathered. Life referred to it as “sociable squatting”. Different styles of hunkerin’ were reported as “sophisticates” tended to hunker flatfooted while others hunkered with their elbows inside the knees.

“A respite from a world of turmoil. The main purpose of hunkerin’ is to get down and hunker together. It’s a friendship thing: get your friends to hunker with you. The man you don’t know is the man you haven’t hunkered with.”