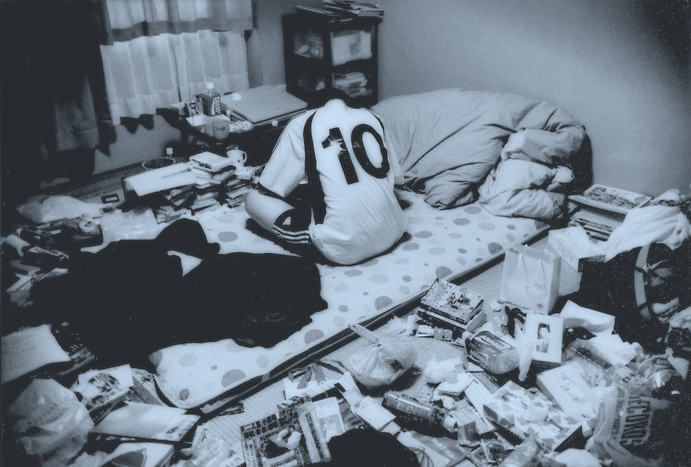 What can Japan do about its ‘perpetual teenagers’? A strange cultural phenomenon from the far east in today’s weird Wikipedia article, unearthed by the Wikiworm.

Hikikomori, literally “pulling inward, being confined” or “acute social withdrawal” is a Japanese term to refer to the phenomenon of reclusive adolescents or adults who withdraw from social life, often seeking extreme degrees of isolation and confinement. Hikikomori have been described as recluses, loners, or “modern-day hermits.”

While the degree of the phenomenon varies on an individual basis, in the most extreme cases, some people remain in isolation for years or even decades.

According to government figures released in 2010, there are 700,000 individuals living as hikikomori with an average age of 31. Still, the numbers vary widely from expert to expert. Among these are the hikikomori that are now in their 40s and have spent 20 years in isolation, this group is generally referred to as the “first-generation hikikomori,” and there is concern about their reintegration into society in what is known as “the 2030 Problem,” when they are in their 60s and their parents begin to die off. Additionally the government estimates 1.55 million people to be on the verge of becoming hikikomori.

Sometimes referred to as a social problem in Japanese discourse, hikikomori has a number of possible contributing factors. Alan Teo has summarized a number of potential cultural features that may contribute to its predominance in Japan, including tendencies toward conformity and collectivism, overprotective parenting, and particularities of the educational and economic systems.

The Japanese education system, like those found in China, Singapore and South Korea, puts great demands upon youth. A multitude of expectations, high emphasis on competition, and the rote memorization of facts and figures for the purpose of passing entrance exams into the next tier of education in what could be termed a rigid pass-or-fail ideology, induce a high level of stress. Echoing the traditional Confucian values of society, the educational system is still viewed as playing an important part in society’s overall productivity and success.

In this social frame, students often face significant pressure from parents and the society in general to conform to its dictates and doctrines. These doctrines, while part of modern Japanese society, are increasingly being rejected by Japanese youth in varying ways such as hikikomori, freeter, NEET (Not currently engaged in Employment, Education, or Training), and parasite singles. The term “Hodo-Hodo zoku” (the “So-So tribe”) applies to younger workers who refuse promotion to minimize stress and maximize free time.

Hikikomori tend to be financially supported by their parents, or by receiving social assistance. They seldom work since jobs usually require socialization. Although rare, some hikikomori have become extremely wealthy. For example, starting with 1.6 million yen (apr. US$14,000) in 2000, Takashi Kotegawa grew his account in the JASDAQ Securities Exchange 10,000 fold over 7 years to 17 billion yen (apr. US$152 million). He first gained fame in Japan after he managed to profit 2 billion yen (apr. US$20 million) in 10 minutes from a Mizuho Securities order blunder.