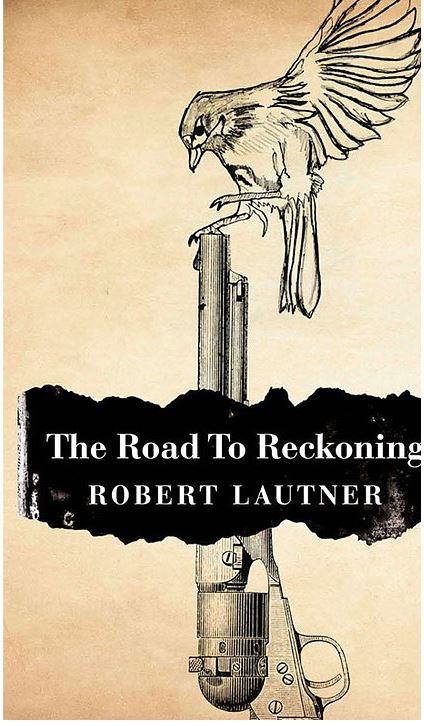 Occasionally I’ll pick up a book because of its cover. It’s only natural. I did this a few years ago with Patrick deWitt’s The Sisters Brothers (2011), and again later with The Flame Alphabet (2012) by Ben Marcus. Such was the beauty of their respective illustrations that I couldn’t resist. As it turned out they were both great novels that I’d recommend to anyone – The Sisters Brothers in particular. Who ever said you shouldn’t judge a book, etc?

Robert Lautner’s The Road to Reckoning (2014) has been the latest to get me on account of aesthetics. Also because I’m a big fan of anti-westerns. What I got was a charming little book that I otherwise would probably not have come across.

The western genre has long held a certain romance for me. The anti-western more still. The dark and surreal novels of Cormac McCarthy, Spaghetti Westerns… the genre has had a cult following and been an inspiration to many directors and writers. Take Quentin Tarantino, for example, who has drawn on the tropes of the revisionist western in Django Unchained. Lesser known gems crop up here and there: 2010’s Meek’s Cutoff, based loosely on the Oregon Trail circa 1845, received widespread acclaim for its realistic portrayal of life in the West, particularly of women, and is a welcome addition to an impressive canon.

There’s something about the gritty realism that appeals to the base parts of the human mind. Placing disparate and often allegorical characters in harsh settings allows an exploration of what it is that makes us human, and what it is that sometimes makes us animal. It stands to reason that if we take ordinary people, place them in harsh and isolated environments, they will do extraordinary things. That universal truth forms the basis of many great tales across genre and medium.

The Road to Reckoning is no different. The story is straightforward: circumstance throws two opposites together, a young boy called Thomas and aging ranger Henry Stands. The two must journey through the West, Thomas heading home, Henry wherever that desperate landscape takes him. Stands is an instantly likable, classic Western hero in the mould of Stephen King’s Gunslinger, or anything starring Clint Eastwood: strong, he embodies the dark and harsh parts of human nature. The boy Thomas is his weak and needy opposite, the normal in the abnormal place. These two characters take much from John Williams’ Butcher’s Crossing, in my opinion the father of the modern Western novel, so that Thomas is Will Andrews, and Stands Williams’ frontiersman, Miller.

The novel is well crafted and compelling. Linguistically both economical and poetic; at times emblematic: ‘I, to this day hold on to only one truth: If a man chooses to carry a gun he will get shot’. At other times it is exhilarating – I found it hard to put down once the shooting had started.

I enjoyed The Road to Reckoning a lot, and think it should have sold more, but it is not on a par with the likes of Butcher’s Crossing, or even The Sisters Brothers. Lautner’s prose loses its way occasionally, and when it does it often takes the suspension of disbelief with it.

The anti-western has been an inspiration for my own writing, too. Whilst my recently published novella, Sometime Like Apes is based loosely around Shakespeare’s The Tempest, it draws on that simple principle that makes the Anti-Western such a popular genre: savage landscapes and savage people. For that reason I recommend The Road to Recknoning as a fine 1p book. Long live the anti-western…

Joey Denham is a teacher, artist and writer, whose novella Sometime Like Apes is available to buy now.

One thought on “1p Book Review: The Road to Reckoning by Robert Lautner”