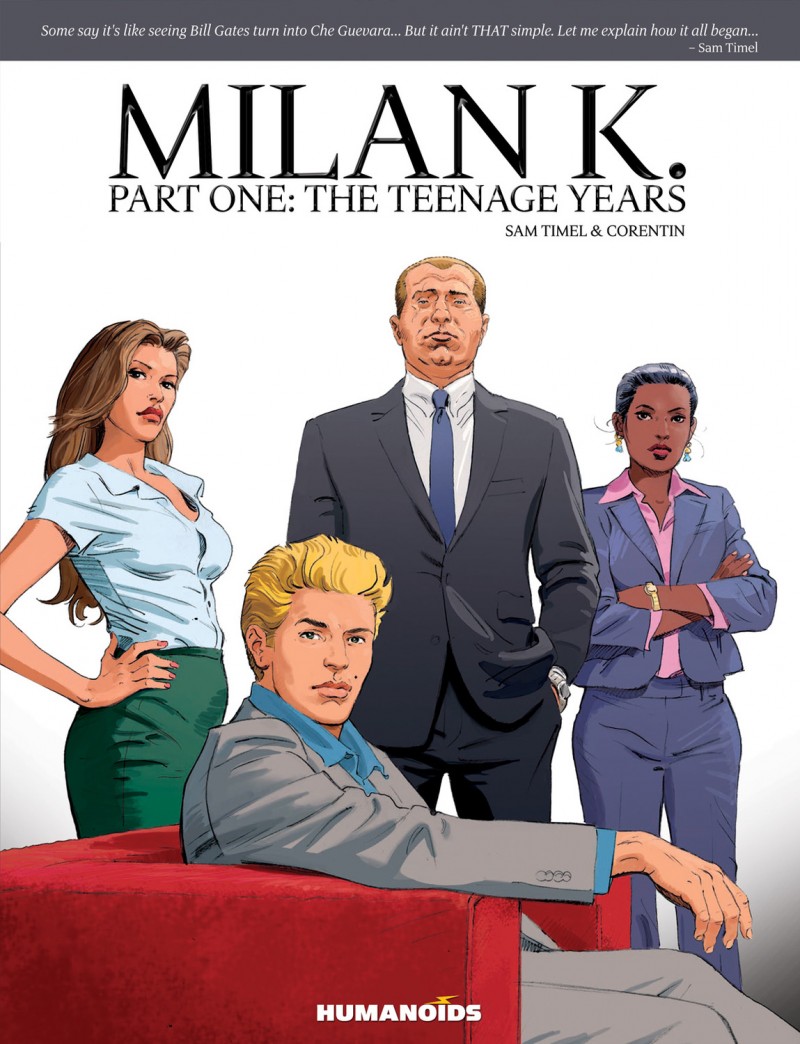 Daniel Kalder discovers a French comic book about Vladimir Putin, which reveals much about how western Europe struggles to categorise the Russian president…

As regular visitors to this site will know, I have an interest in bandes dessinées, i.e. French comics. Every now and again I like to bring a particularly interesting example to the attention of Dabblers. A few months back, for instance, I reviewed a most curious science fiction story about the EU in space. Recently meanwhile I read Sam Timel and Corentin’s Milan K. Part One: The Teenage Years which is fascinating because it is the first time I have ever seen anybody take the complicated, murky mess that is Putin’s Russia and transform it into a straightforward action story featuring goodies, baddies and billionaires. Unless you count almost every news article ever published about Putin’s Russia, of course.

The set-up is as follows: Milan K. is the teenage son of noble oligarch Mikhail Khodorov, standing in for the less noble real life (ex-)oligarch Mikhail Khodorovsky who was famously imprisoned by the Putin regime for doing bad things lots of other, more loyal, oligarchs also did in the 1990s and yet for which they were, mysteriously, never punished. When Khodorov is locked up in prison and his family wiped out by Putin analogue President Palin (yes, I know… groan) young Milan K. has to go on the run, aided only by his loyal bodyguard. His goal is to get some cash his father squirreled away for him, and then return to take down the nefarious President Palin. Along the way he has many scrapes with death, travels to foreign lands, enjoys some romantic encounters with beautiful ladies and learns a thing of two about what a dark place the world can be.

On the face of it, Milan K. Part One: The Teenage Years is a pretty straight European adventure comic of the sort you don’t often see in the UK or US, where superheroes and science fiction have dominated the mainstream for decades. Indeed it reminded me of Largo Winch: The Heir Apparent, a French film I have seen which is in turn based on a very successful BD series I haven’t read. In that story, another highly talented scion of a billionaire does battle with nefarious types to retain control of his fortune and defeat some unpleasant swine.

However what makes Milan K. really interesting is the way in which it takes real characters and events culled from the newspapers and represents them in cartoon form. In particular, on page 107 there is a drawing of a poisoned FSB agent lying in a hospital bed which is directly based on the famous image of the dying Alexander Litvinenko. But Milan K. goes much further and postulates an entire secret organization of noble FSB agents dedicated to bringing down Putin/Palin, none of whom have any ties to shady oligarchs. Plausible? Only in an adventure comic. However it’s that implausibility which is fascinating- this after all is a trope that actually originated in media coverage of deadly serious news events.

Another media trope which the book takes quite literally is Putin = gangster. Of course we have been confronted with multiple Putins over the years: sometimes we are told he is a mafia don, other times that he is Stalin or Hitler, or best of all a beefcake male model posing with a tiger cub. None of these Putins is very plausible; they are all grotesque exaggerations or fairly useless simplifications. Milan K. however inadvertently makes clear how implausible attempts to paint Putin as merely da capo really are: this foul-mouthed, foul-tempered thug is so obviously unsuited to serve as the leader of a vast and complex state that the creators have to posit a mysterious eminence grise who is giving him orders and guidance. Me, I don’t think Putin takes orders from anybody.

This is not to say that Putin is a lovely man; of course he isn’t – but simplifications can be misleading; indeed as Milan K. shows, even in a comic book it doesn’t really work. Alas, these are the simplifications our leaders and assorted media deep thinkers live by – which may go some way to explaining why the real Putin, who is rather more complex, keeps more or less getting his way.

3 thoughts on “Milan K. Part One: The Teenage Years”