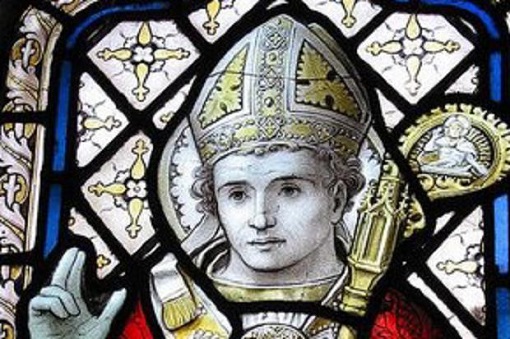 Today is St Swithin’s Day, and if it’s raining you can expect another forty days’ worth of it. But why? As ever, Prof Nick Groom is our guide to English legends, lore and seasons…

In the Roman calendar, this month was named Julius to honour Julius Caesar. In English this was rendered ‘July’, which until the middle of eighteenth century was pronounced to rhyme with ‘truly’, hence the rhyme:

And Puppy-like there told him truly,
First leap he had was but last July. (Poems on Affairs of State, 1704)

July is the height of summer, yet there is violence in the air. Nature is red in tooth and claw: stags fight, sparrow-hawks hunt down partridge and ferrets catch rabbits, fowlers annihilate sparrows, and the corn is cut down by reapers. And July is the thunder month. In 1808 the month of July was so hot that the Gentleman’s Magazine reported that at least seven people died from the excessive temperature. That heatwave finally ended on 15 July with thunderstorms of such ferocity that one of the pinnacles of Gloucester Cathedral was destroyed and violent hailstorms devastated the south-west, with jagged fragments of ice up to a foot long falling from the sky.

July is also home to the best-known example of saints’ day weather lore we have. The 15 of July is St Swithin’s (or Swithun’s) Day. If it rains on St Swithin’s Day it will rain for forty days. As a seventeenth-century almanac has it,

In this Month is St Swithin’s day,
On which if that it Rain, they say
Full forty Days after it will,
More or less, some Rain distill. (Poor Robin)

Rain before the harvest could spell disaster, and consequently weather prognostication and prayers to tutelary saints were taken very seriously by agrarian communities and still survive in popular folklore today. Unfortunately, however, the example of St Swithin’s Day, renowned as it is, dramatically demonstrates the insoluble complications that are inherent in our calendar, and emphasizes that the calendar itself is the result of centuries of cultural history, rather than a stable, divinely sanctioned instrument of reliable forecasting.

Swithin was bishop of Winchester from about 854 until his death in 863. His feast day commemorates the anniversary of his translation (moving his bones) from the outside to the inside of Winchester Old Minster on that day in 971. Accounts of what happened next then diverg. There is a tradition that on the day of translation there was a heavy downpour, revealing the saint’s powers over the weather. This suggests that the story is a warning against the dangers of translating holy remains and relics, which were often sold or stolen. However a more detailed version is given by William of Malmesbury, writing about 1125. Swithin had apparently chosen his own burial plot to be a sort of posthumous mortification of the flesh:

On the point of bidding farewell to earthly life, on his authority as bishop he ordered those present to inter his corpse outside the cathedral, where it should be exposed both to the feet of passers-by and to the dripping of water from the eaves.

As this plan had been thwarted by St Swithin’s translation to the dry interior of the building, he caused it to rain for forty days until he was reinstalled outside. Weather forecasting on St Swithin’s Day is therefore an example of biblical meteorology: reading the signs and portents on a particular day to see into the divinely ordained future. If only, however, it were that simple.

Contrary to tradition, St Swithin’s remains were never returned to his ostentatious humility outside the Minster. Instead, he was moved twice within the cathedral and some relics were sent abroad before his shrine was destroyed during the Reformation. But there are other, much more significant problems with the St Swithin tradition. St Swithin’s Day was originally 2 July, the day on which he was buried in 863. This was his feast day in England, at least until 1149, and remains so on the continent. Stavanger Cathedral in Norway is dedicated to St Swithun (the local spelling), and interestingly there is a Norwegian proverb about the saint that likewise indicates his weather-wisdom:

On St Swithun’s day
if the clouds are stacked
it lasts to St Olaf’s day [29 July].

But irrespective of this, it transpires that the early Christians already had weather lore attached to the date of 2 July several centuries before St Swithin. This meteorological tradition invoked the early Roman martyrs Processus and Martinian, and predicted that if it rained on their shared feast day it would rain throughout the summer and drown the corn; and this association also survives in another piece of weather lore, which predicts

If the first of July it be rainy weather,
’Twill rain more or less for four weeks together. (Atheneum)

Such a claim is strikingly close to the St Swithin’s Day forecast, except that Processus and Martinian’s lore was based on Roman farming practices and Mediterranean weather patterns in about the second century AD. So in England, when St Swithin’s Day was moved to 15 July to celebrate the saint’s translation, this migration carried with it the established associations of rain.

The history of St Swithin’s Day therefore places the saint’s day itself rather late in the narrative, and the story of his proverbial weather wisdom therefore runs as follows. From late June and early July, farming communities are anxious about the imminent harvest and vigilant for rain. A number of sayings therefore emerged or were adapted from Roman lore in the earliest days of the Christian Church, to seek some foreknowledge of the incoming harvest. These sayings were focused on the beginning of July and consequently gravitated towards Processus and Martinian, who were later eclipsed by St Swithin when as an English bishop he became a more identifiable candidate for intercession rather than a pair of obscure Roman saints. When the feast of St Swithin was then subsequently moved to 15 July, St Swithin retained his status as a rain saint, and so the weather lore associated with him shifted by nearly a fortnight. So although the prediction that rain on St Swithin’s Day would last for forty days is quoted in an early fourteenth-century manuscript, even by then it had become hopelessly remote from the original date, and indeed the original country, that had generated the advice. Finally, both the old St Swithin’s Day (2 July) and the new St Swithin’s Day (15 July) are Old Style dates, based on the Julian calendar that was replaced by the Gregorian calendar in 1752. To adapt them to our current reckoning requires adding at least twelve days, which would take new St Swithin’s Day to 27 July, although perhaps ironically it would position old St Swithin’s Day to 14 July: all that explanation, then, for perhaps just one day’s difference…

Accounts of the St Swithin’s Day proverb often appear in British newspapers around 15 July. These accounts argue that the jet stream settles in mid-July, which sets British weather patterns until about the end of August: a southerly jet stream pulls depressions to Britain from over the Atlantic, resulting in wet weather, but a more northerly jet stream can attract sub-tropical fronts from the Azores. This is ingenious, but completely ignores the erroneous dating of St Swithin’s Day. It is, in effect, an example of recruiting science to prove a misinterpretation of cultural history – something that was already going on in the seventeenth century in Gadbury’s almanac Ephemeris, which provided a state-of-the-art astrological explanation for the proverb:

To make Saint Swythin weep, the Potent Sun
Doth Chronus smite by Opposition,
And, Venus too frowns with the same Aspect
Upon him also, heightening the Effect.

Perhaps we should return to old St Swithin’s Day, as calculated in New Style, for our weather forecasting (14 July) – although how that more authentic date will fare in these days of climate change is anyone’s guess. There are also alternative, less contentious, but perhaps in the end less useful prognostications: if the deer rise up dry and lie down dry on St. Bullion’s Day there will be a good goose harvest. (I must admit that I forgot to check how dry the deer were this year on 4 July.)

Apples, meanwhile, rely on being christened – or rained upon – by St Swithin’s Day before they are ready for picking, and by virtue of St Swithin’s identification with the rain and with cider he is also known as ‘the drunken saint’. Finally, old St Swithin’s Day has a sort of coda in the ‘dog days’, the season that precedes the rising of the Dog Star, Sirius. During this time the sun was believed to increase its heat and make these days the hottest of the year. The result of this was to induce sickness in humans and madness in dogs. St Swithin’s rains permitting, the forty dog days ran from 3 July to 11 August in ancient Rome; more recent estimates begin the dog days on 19 July and end them on 28 August.

This cat’s cradle of dates and folklore demonstrates how in England, the whole cycle of the seasons and consequently the comprehension of the weather developed as much as a series of cultural events as it did as a pattern for the agricultural year. All in all, it’s an abiding example of how culture and heritage can give a distinct shape to the calendar and to our national conversation on the weather, and to the very English preoccupation with rain. As Feste sings at the end of Twelfth Night:

When that I was and a little tiny boy,
With hey, ho, the wind and the rain,
A foolish thing was but a toy,
For the rain it raineth every day.