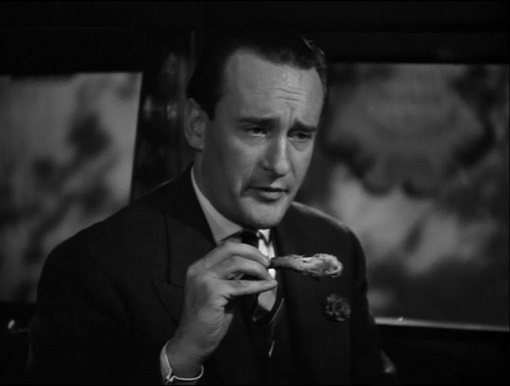 Today marks the 108th birthday of George Sanders, the debonair actor who called his autobiography ‘Memoirs of a Professional Cad’…

Born on this day in 1906 – in St Petersburg, whence his family wisely returned to England in 1917 – was the actor George Sanders. With his good looks and crisp, sonorous upper-crust voice, he became the man for playing debonair, louche, more or less depraved English aristo types – most memorably Lord Henry Wotton in The Picture of Dorian Gray, Jack Favell in Rebecca [above] and Addison deWitt in All About Eve. He was a commanding presence on screen, even if he was mostly doing little more than playing himself (though he can hardly be accused of that in his classic voicing of Shere Khan in The Jungle Book).

The tenor of Sanders’s personal life may be judged from the fact that he called his autobiography Memoirs of a Professional Cad, and suggested the title A Dreadful Man for his biography (written by his friend Brian Aherne). He managed to marry not only the ineffable Zsa Zsa Gabor but also, some years later, her sister Magda – a marriage that lasted just six weeks and drove Sanders even further into drink.

His end was sad. Threatened by dementia and failing health, Sanders decided to give up the unequal struggle, finally killing himself with a massive overdose of Nembutal in a hotel room in a small coastal town near Barcelona. He left behind a message addressed to ‘Dear World’:

‘I am leaving because I am bored. I feel I have lived long enough. I am leaving you with your worries in this sweet cesspool. Good Luck.’

He was 65 – the precise age at which, according to his pal David Niven, he predicted that he would kill himself.

But what of the real George Sanders? As ever, we turn to the authoritative Me Cheeta, where the index entries are not promising, all listed under ‘Sanders, George, caddishness of’. However, Cheeta’s few encounters with Sanders seem to have left a reasonably favourable impression. The two were introduced at a notably starry private screening of Tarzan and His Mate (the one in which Maureen O’Sullivan takes a very saucy swim). ‘Cheetah, my deah,’ says George. ‘If you’re anything like me, you’ll find it absolutely excruciating to watch yourself on screen. I should leave before those terrible monstahs turn against you and skin you alive. It’s not going to shit on me, is it, Maureen?’

Hmm. On a more exalted level, it’s an intriguing thought that the boy Sanders would have been walking the streets of St Petersburg at the same time as the teenage Nabokov. I wonder if their paths ever crossed – either then or later, when both lived in Switzerland. Sanders might have made rather a good job of Clare Quilty in the Lolita film…