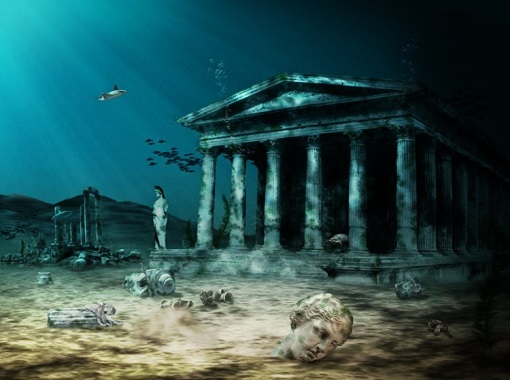 Fans and devotees of Spongebob Squarepants (yes, I’m raising my hand) will recall that while the town of Bikini Bottom itself is located underwater it nevertheless borders a sort of sea-under-the-sea. At the underwater beach Larry Lobster pumps iron and Spongebob and Patrick play inanely in the surf when the mood catches them. One of the more convolutedly comical images you’ll see on Spongebob is Sandy the Squirrel, a terrestrial ex-pat, lying out to tan here while wearing a glass oxygen globe to keep from drowning.

Not long ago I learned that such deeps-under-the-deep actually exist. Pools of denser or more saline water may collect at the bottom of the sea, filling in the cavities and contours of the ocean floor and creating subaquatic beaches at their margins. Who knows but maybe these sub-seas themselves contain smaller sub-sub-seas hemmed in by their own delicate necklaces of sand. Moving downwards, each successive body of water is denser and heavier than the one above it. Moving upwards, each layer is thinner and lighter until you reach the surface where the liquid ocean is separated from the gassy atmosphere.

Really, if you consider it, the atmosphere itself is just another sea (of air) less dense than the watery ocean below it. What if we too, like Spongebob and friends, live without realizing it at the bottom of a sea? It’s an idea with a surprisingly long pedigree. For hundreds of years, certain people with too much mental leisure have suspected that human beings might in fact be a species of bottom-feeding fish, and wondered about the life of the upper world at the surface above.

For example, there’s a passage in Bernard de Fontenelle’s A Plurality of Worlds in which the narrator speculates on the difficulties that visitors from that higher world might face here below. Quoting John Glanville’s 1688 translation: “We find our Air consists of thicker and grosser Vapours than the Air of the Moon. So that one of her Inhabitants arriving at the Confines of our World, as soon as he enters our Air will inevitably drown himself.”

Fontenelle’s fictional interlocutor, the Countess, hopes aloud that lunar sailors might suffer shipwreck so that their bodies would sink down to earth for her inspection. “How pleasant would it be,” she says, “to see ‘em lie scattered on the ground, where we might consider at our ease their extraordinary Figures!”

But what, said I, if they could swim on the outward surface of our Air, and be as curious to see us, as you are to see them; should they Angle or cast a Net for us, as for so many Fish, would that please you? Why not? said the Countess; For my part I would go into their Nets of mine own accord, were it but for the pleasure to see such strange Fishermen.

It goes without saying that any salmon or tuna curious enough to swim into our nets just for the pleasure of seeing such strange (human) fisherman is likely to meet an unpleasant doom. But Fontenelle’s Countess is willing to risk being rendered into sashimi for the sheer transcendence of the experience, and there are plenty like her today who would happily board the first flying saucer that parked itself at their door.

Speaking of alien visitors (and moving back in time almost five hundred years to circa 1210), Gervase of Tilbury in his Otia Imperialia tells a similar story which has been quoted with perfect credulity by every UFO enthusiast on the internet. In Ireland, he writes,

there happened in the borough of Cloera, one Sunday, while the people were at Mass, a marvel. In this town is a church dedicated to St. Kinarus. It befell that an anchor was dropped from the sky, with a rope attached to it, and one of the flukes caught in the arch above the church door. The people rushed out of the church and saw in the sky a ship with men on board, floating before the anchor cable, and they saw a man leap overboard and jump down to the anchor, as if to release it. He looked as if he were swimming in water. The folk rushed up and tried to seize him; but the Bishop forbade the people to hold the man, for it might kill him, he said. The man was freed, and hurried up to the ship, where the crew cut the rope and the ship sailed out of sight.

Thank goodness for considerate bishops. “It might kill him” because, as Fontenelle agrees above, such sailors-on-the-ether would presumably drown if they attempted to inhale our dense, suffocating atmosphere. Gervase of Tilbury goes on to say that the anchor left behind by the sky ship was still, in his own day, displayed at the church of St Kinarus – but the intervening centuries seem to have misplaced it.

The earliest suggestion I can find that humans live and breathe unknowingly at the bottom of a sea comes from the Phaedo. After describing how the Greeks and other peoples of the Mediterranean live like colonies of frogs or ants round a pond, Socrates goes on to say that in fact the world as men know it is only a cavity in the true earth, and that the air and water we know are merely the denser dregs of ether that have settled down from the pure ocean above us.

“Imagine someone living in the depths of the sea,” says Socrates….

He might think that he was living on the surface, and seeing the sun and the heavenly bodies through the water, he might think that the sea was the sky… Although we live in a hollow of the earth, we assume that we are living on the surface, and we call the air heaven, as though it were the same heaven through which the stars move… [But] if someone could reach to the summit, or put on wings and fly aloft, when he put up his head he would see the world above just as fishes see our world when they put up their heads out of the sea.

On the shores of that higher, truer world above us, Socrates says, the blessed dwell in celestial cities, they worship in celestial temples, they enjoy celestial pleasures and entertainments. He says that if a mortal were actually to make his way to the top of the sea of ether and gaze into that upper realm, the glorious vision would probably kill him. This judgment is perhaps seconded in parable by events which occurred in the 2004 Spongebob Squarepants Movie, when Spongebob and Patrick, having left behind the base entertainments of Bikini Bottom, find themselves plucked from the shallows by a human seashell collector and nearly scorched to death under a heat lamp.

6 thoughts on “Deeps beneath the Deep”