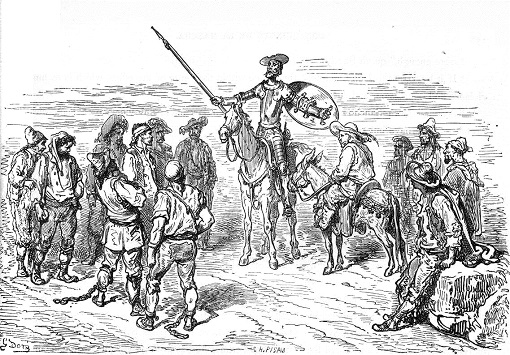 Can reading fiction ever really be justified when there are so many more ‘important’ things in the world? Douglas ponders a question that occasionally troubles all bibliophiles…

My first year of college I took a course in Arthurian literature. There were fewer than ten of us in the class. After a couple months of smothering our brains in downy volumes of medieval and Gothic-revival romances our professor experienced (or manufactured for our benefit) a crisis of conscience. Why of all things, he asked us, should we waste our time with books like these? When it comes down to it, why read fiction at all? Aren’t books irrelevant? Isn’t the world simply exploding with more serious concerns?

That was 1991. It hadn’t been long since the fall of the Berlin wall, the Soviet Union was just loping off the stage, and Nelson Mandela was free in South Africa. The world as we and our parents had known it was ceasing to be. These were times that historians called “momentous” – and had we really shut ourselves indoors to read Chrétien de Troyes and Malory? Our professor, being a wise man, assigned Cervantes for the rest of the course and invited us to feel ourselves on Rocinante’s bony back.

If the nineties turned out relatively calm, the last dozen years have seen one crisis after another. It started, perhaps, with the 2001 terrorist attacks in New York and the launch of two American wars of questionable wisdom. Then there were follow-up attacks in Madrid, London, and Mumbai. We saw the collapse of the world economy. We saw natural disasters in Indonesia, Haiti, and Japan on a scale to dwarf Voltaire’s Lisbon earthquake. Then there was the Arab uprising which has since devolved into the Syrian bloodbath. All eyes are presently turned to Ukraine and the Crimea. The past decade and more has felt uncomfortably momentous.

I do experience occasional pangs of conscience when I switch off the radio or set the virtual newspaper aside to pick up a book. I feel a twinge of something like guilt when I decline to inform myself further on the goings-on of the world at large and spend an hour writing a blog post on a clever passage from Melville or Robert Louis Stevenson. I hear the question again: Isn’t the world simply exploding with more serious concerns?

I don’t want to attempt a lofty defense of bookwormism. Long-winded and complicated apologies rarely convince anyone that doesn’t already share the apologist’s own sympathies. I know that I’m an obsessive person and in certain respects not very representative of my species, most of whom have more balanced personalities and interests than I do. With shockingly few exceptions, the only things I really care about in this world are books, so of course I’m going to find ways of justifying myself to myself.

Even so, it seems clear to me that being human means something more than politics or economics or geology or weather. Of course it may, and frequently does, mean these things too. But where human experience overflows the bounds of outward necessities, there art and culture appear. Literature, as the art and culture of words, is an attempt to enjoy and account for and preserve that excess. I hope you’ll agree that it’s sometimes life’s overabundance that is most precious, most wonderful.

At its best, reading a book is a human encounter. Reading well is not an escape into oneself but a shared search for answers to questions that are sometimes obvious, sometimes sensed only with gloved hands in a dark room. I like to think that when politics and economics and geology and weather conspire to murder and oppress, picking up a book can be a way of giving a damn. Maybe I’m still bouncing on Rocinante’s back, but I like to believe that reading is a form of solidarity. We read for ourselves, certainly, but maybe we can read for each other too.

2 thoughts on “The Irrelevance of Literature”