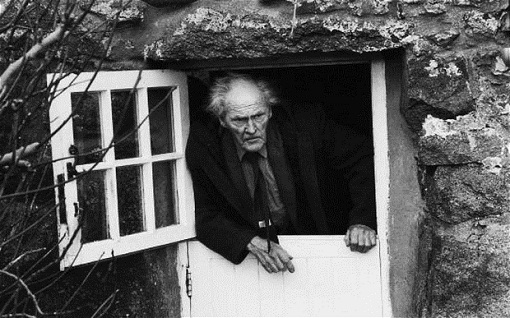 The biography of the austere and forbidding poet R.S. Thomas is a hoot, reveals Nige…

It’s not often a biography has me laughing out loud – let alone in the Introduction. But so it was with Byron Rogers’ The Man Who Went Into the West: The Life of R.S. Thomas, which I began the other day. The Introduction ends with Rogers discovering that all that survived by way of a personal inventory of the lives of the late poet and his artist wife was contained in four supermarket bags. A list of the contents of one bag follows, beginning with

and so it goes on, through

A book of telephone numbers – containing none. An exercise book containing a hair prescription from a Dr Ferguson of Bromsgrove…

‘That,’ declares Rogers, ‘was when I decided to write his biography.’

Even the captions to the photographs are funny. A picture of the poet as a baby depicts ‘His first, and possibly most successful, attempt at a smile.’ Thomas appears behind his young son in another picture, his back turned, bent grimly over a scythe. ‘R.S.’ notes Rogers ‘brooded much on grass and the bluntness of scythes.’ Of course he did.

If it seems strange that such an austere and forbidding figure as Thomas should be the subject of such a laugh-packed biography, bear in mind that a BBC arts correspondent told Rogers that he’d only met three genuinely funny men in his life – Lenny Bruce, Ken Dodd and… R.S. Thomas.

Thomas the man emerges from Rogers’ account as a great comic figure – and it’s not all unintentional. There was a lot of play-acting and of bone-dry, pitch-black comedy in Thomas’s carefully cultivated persona – and a lot of absurdity in his posturing, which Rogers brings out beautifully. The result is a hugely revealing portrait of a man who did his level best to conceal, mystify and mislead – not least in his ‘autobiographical’ writings – and a very very funny book. By the time I was halfway through it had already made me laugh aloud – often on public transport – a dozen times or more. What more could you ask?