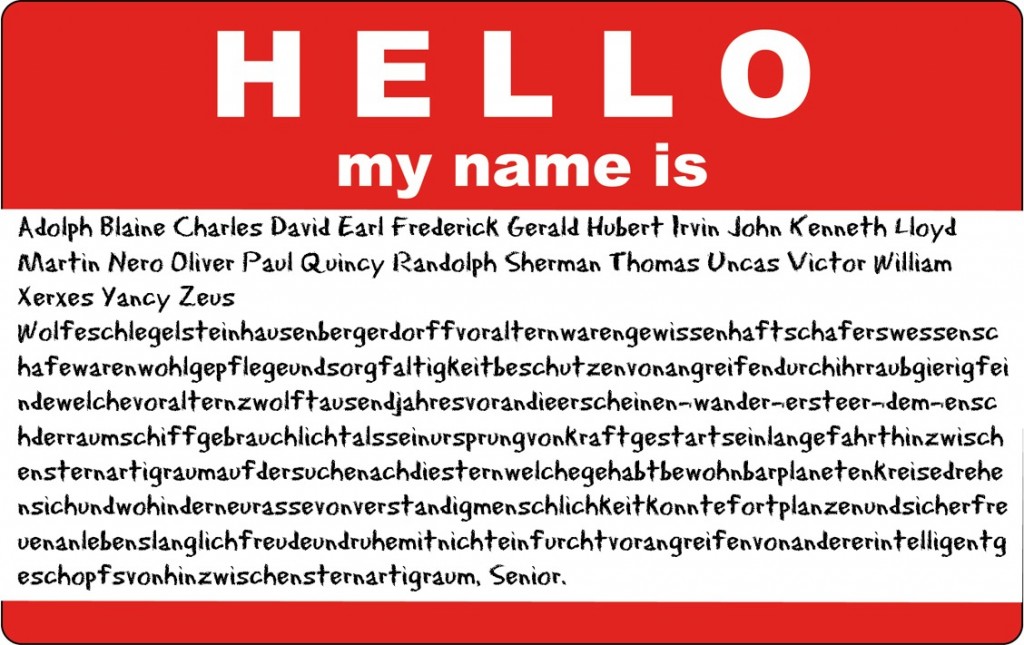 It’s a good thing that the majority of today’s weird Wikipedia article is copy and pasted, as there is not a chance that I would have been able to type this story out manually…

Hubert Blaine Wolfeschlegelsteinhausenbergerdorff, Sr. (Wolfe+585, Senior) was the short name of a Philadelphian typesetter, who held the record for the longest personal name ever used. “585” represents the number of additional letters in his full surname (total 590).

He was born in Bergedorf (now part of Hamburg), Germany, and later emigrated to the United States, settling in Philadelphia. His name first attracted attention when it appeared in the 1938 Philadelphia telephone directory. A son, Hubert Blaine Wolfe­schlegel­stein­hausen­berger­dorff, Jr., was born in Philadelphia in 1952, and was able to pronounce his surname by age three.

When Inquirer journalist Frank Brookhouser omitted the letter “u” in reporting a 1952 Philadelphia voter registration under the 35-letter surname, Wolfe­schlegel­stein­hausen­berger­dorff’s prompt correction was carried by Time, and passed on to other outlets. Philadelphia’s business computers used an abbreviated form on the city’s voting registration books; the utility company, however, when told he wouldn’t pay his bill unless his name was right, began spelling it properly, on three lines.

In 1964, an Associated Press wire story reported that the IBM 7074 computer at the John Hancock Mutual Life Insurance Co. could process one million policies but refused to handle that of Wolfe­schlegel­stein­hausen­berger­dorff, which was specially processed by hand. He explained to reporter Norman Goldstein, “When somebody calls my name, I don’t have any trouble finding out who they mean …. I don’t like being part of the common herd.” Versions of this story contain the oldest known occurrences of the long name in print. Some versions catered to hexakosioihexekontahexaphobia by conveying the rumor that his name contains exactly 666 letters, which has not been supported by any reliable spelling.

He appeared in all editions of the Guinness Book of World Records from roughly 1975 to 1985 as having the longest personal name, and was photographed for the book in front of a New York City marquee displaying his name, once again misspelled. By 1983, only the 35-letter form of the name appeared in the Guinness Book; in the late 1980s, the category disappeared. The “New Dictionary of American Family Names” translates the 35-letter form as “a descendant of Wolfeschlegelstein (one who prepared wool for manufacture on a stone), of the house of Bergerdorf (mountain village)”; the Fairleigh Dickinson University Names Institute gives “wolf slayer who lives in the stone house in the mountain village”.

The Museum of Hoaxes, which says the 590-letter name “seems to be true”, provides a translation by Charles Haberl; it treats Steinhausen as a separate geographical name and continues,

“Who before ages were conscientious shepherds whose sheep were well tended and diligently protected against attackers who by their rapacity were enemies who 12,000 years ago appeared from the stars to the humans by spaceships with light as an origin of power, started a long voyage within starlike space in search for the star which has habitable planets orbiting and whither the new race of reasonable humanity could thrive and enjoy lifelong happiness and tranquility without fear of attack from other intelligent creatures from within starlike space.”