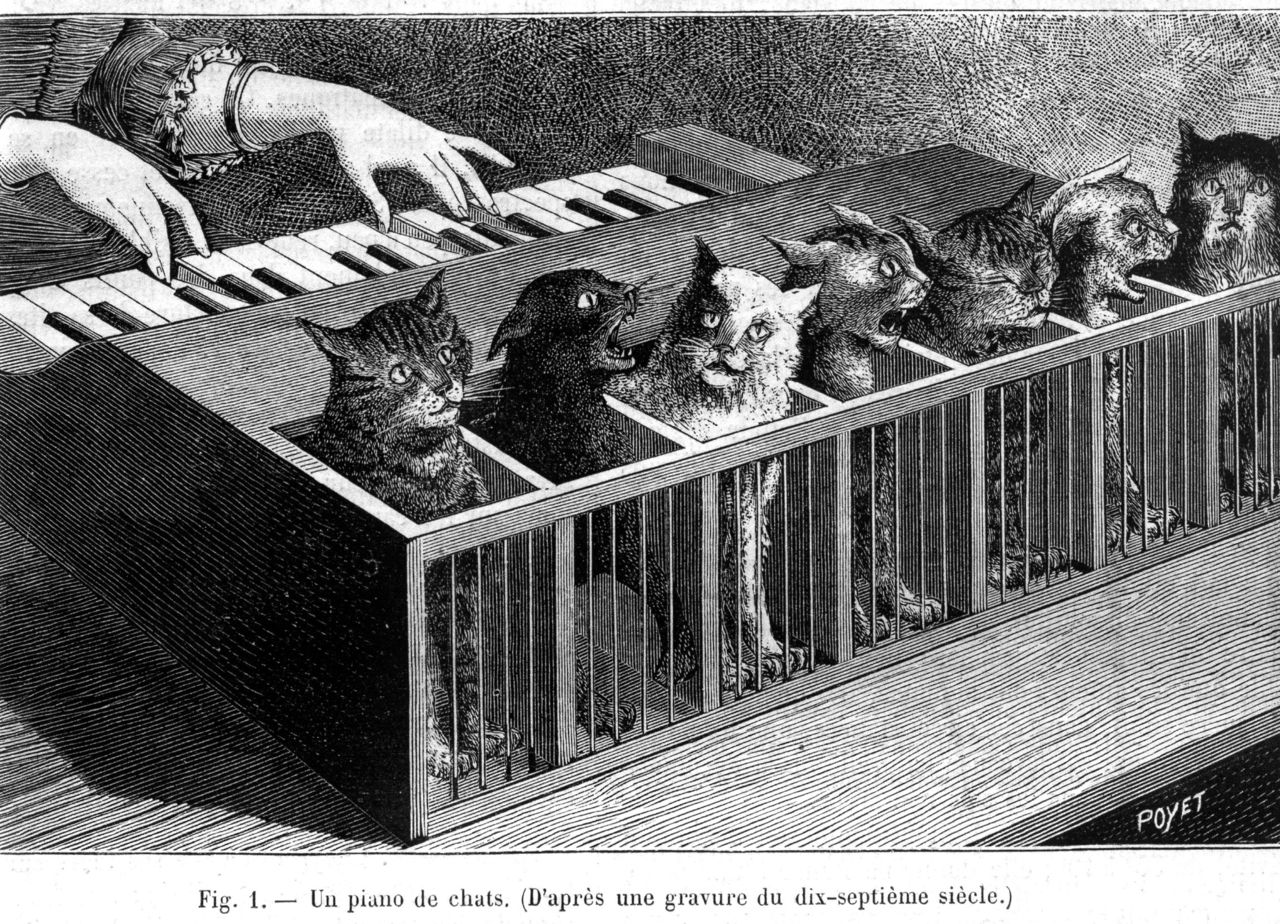 After last week’s comparatively gentle report on photographic pigeons, things take a turn towards the macabre with this painful sounding piano

A cat organ or cat piano (Katzenklavier in German) is a conjectural musical instrument which consists of a line of cats fixed in place with their tails stretched out underneath a keyboard so that cats cry out in pain when a key is pressed. The cats would be arranged according to the natural tone of their voices.

There is no official record of a Cat Organ actually being built, but is rather described in literature as a bizarre concept.

This instrument was described by the French writer Jean-Baptiste Weckerlin in his book Musiciana, extraits d’ouvrages rare ou bizarre (Musiciana, descriptions of rare or bizarre inventions):

When the King of Spain Felipe II was in Brussels in 1549 visiting his father the Emperor Charles V, each saw the other rejoicing at the sight of a completely singular procession. At the head marched an enormous bull whose horns were burning, between which there was also a small devil. Behind the bull a young boy sewn into a bear skin rode on a horse whose ears and tail were cut off. Then came the archangel Saint Michael in bright clothing, and carrying a balance in his hand.

The most curious was on a chariot that carried the most singular music that can be imagined. It held a bear that played the organ; instead of pipes, there were sixteen cat heads each with its body confined; the tails were sticking out and were held to be played as the strings on a piano, if a key was pressed on the keyboard, the corresponding tail would be pulled hard, and it would produce each time a lamentable meow. The historian Juan Christoval Calvete, noted the cats were arranged properly to produce a succession of notes from the octave… (chromatically, I think).

This abominable orchestra arranged itself inside a theatre where monkeys, wolves, deer and other animals danced to the sounds of this infernal music.

The instrument was described by German physician Johann Christian Reil (1759–1813) for the purpose of treating patients who had lost the ability to focus their attention. Reil believed that if they were forced to see and listen to this instrument, it would inevitably capture their attention and they would be cured. 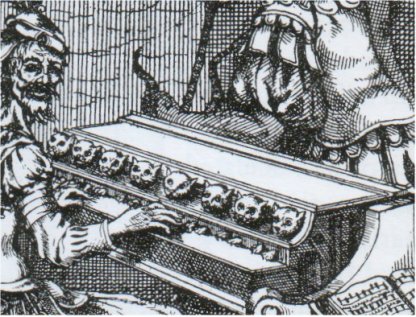 The instrument was recreated using squeaky toys by Henry Dagg for a garden party held at Clarence House in 2010 by Prince Charles to support his Start initiative for sustainable living. The tune “Over the Rainbow” was played and caused great amusement.

The People’s Republic Of Animation, a professional animation studio, released an animation titled The Cat Piano. This work tells the tale of a city of cats whose musicians are kidnapped by a human in order to make a cat piano. The Academy announced that it was shortlisted for an Oscar for Best Animated Short. As cartoons go, it’s rather dark…

2 thoughts on “The Cat Organ”